Bug Squad
sitenum=63
Happenings in the insect world
What a Wonderful Gift! Bee research at the Harry H. Laidlaw Jr. Honey Bee Research Facility at the University of California, Davis, received a generous gift of $30,000, thanks to Debra "Debbie" Jamison of Fresno, California state regent of the Daughters of the American Revolution (DAR),

Jamison, who has always loved bees and appreciated their work, spearheaded the DAR drive. She recently presented the check to officials at the UC Davis Department of Entomology and Nematology.

“I have had a lifelong love and respect for bees and I spent a lot of my childhood watching them, attracting them with sugar water, catching and playing with them and even dissecting them during a time when I imagined myself to be a junior scientist,” Jamison told the crowd at the UC Davis ceremony. “Back in those days, there was an abundance of bees, usually observed by this kid in her family’s backyard full of clover blossoms—something you rarely see any more due to spraying of pre-emergents and other weed killers.”

So when Jamison, whose first name means "bee" in Hebrew, became state regent of the California State Society of DAR, she adopted the motto, “Bees are at the heart of our existence” and vowed to support research to help the beleaguered bees.

Jamison and her state regent project chair, Karen Montgomery of Modesto, presented the $30,000 check to Edwin Lewis, professor and vice chair of the UC Davis Department of Entomology and Nematology, and bee scientist/assisant professor Brian Johnson at a ceremony in the department's Häagen-Dazs Honey Bee Haven on Bee Biology Road, west of the central campus.

Lewis gratefully accepted the check on behalf of the department and noted that his mother, Betty Lewis, is an active member of the DAR Owasco Chapter in Auburn, N.Y. “My mother would definitely approve of this project,” he quipped. Lewis gifted Jamison with a mosaic ceramic figure of a bee, crafted by Davis artist Donna Billick, co-founder and co-director of the UC Davis Art/Science Fusion Program.

The funds will be used in the Johnson lab. His graduate student, Gerard Smith, researches the effect of pesticide exposure in the field on honey bee foraging behavior, and graduate student Cameron Jasper studies the genetic basis of division of labor in honey bees.

Jamison has visited the Laidlaw facility and the adjacent Häagen-Dazs Honey Bee Haven several times. Last September she and Fresno beekeeper Brian Liggett "talked bees" and bee health with Cooperative Extension specialist Eric Mussen of the UC Davis Department of Entomology and Nematology and Lynn Kimsey, director of the Bohart Museum of Entomology and professor of entomology.

Like the DAR, the honey bee is closely linked to America.  European colonists brought the honey bee to the Jamestown Colony, Virginia, in 1622, some 153 years before the American Revolution. Native Americans called it “the white man’s fly.” Honey bees did not arrive in California until 1853, transported via the Isthmus of Panama.

The U. S. honey bee population has declined by about a third since 2006 due to the mysterious malady known as colony collapse disorder (CCD), said Mussen, attributing CCD to multiple factors including disease, pests, parasites, pesticides, malnutrition and stress.

Meanwhile, the gift from the nation’s oldest genealogical society to support one of the world’s oldest--and the most beneficial--insects,  the honey bee, is a gift from the heart. 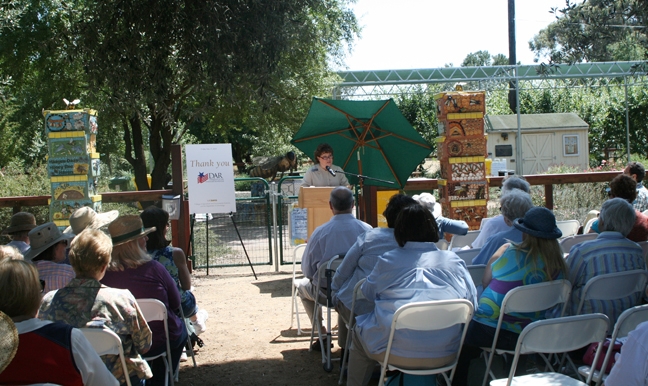 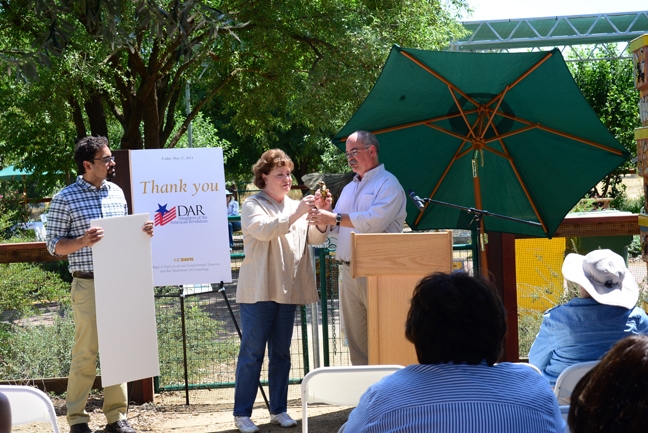 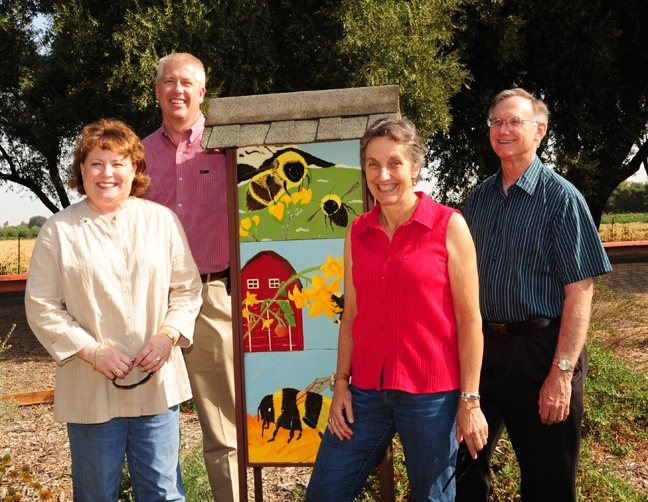