Bug Squad
sitenum=63
Happenings in the insect world
Have a Rice Day! (Except for the Armyworms) Bugs, not so much.

California's 2015 rice season indicated unprecedented levels of armyworms--the highest of the last 25 years, according to Extension entomologist Larry Godfrey of the UC Davis Department of Entomology and Nematology.

He's one of the speakers at the annual California Rice Field Day, set Wednesday, Aug. 31 at the Rice Experiment Station, Biggs. His topic: “The Rice Insecticides: Maximize Use of IPM Tactics to Conserve These Products."

Godfrey, who has addressed Rice Field Day for 25 years, will discuss how the California rice industry's use of insecticides is threatened by two major factors: the development of insecticide resistance and regulatory actions.

Godfrey, who has addressed Rice Field Day for 25 years, will discuss how the California rice industry's use of insecticides is threatened by two major factors: the development of insecticide resistance and regulatory actions. Spodoptera frugiperda (Photo courtesy of Wikipedia)
Joanna Bloese, a student in the Godfrey lab, will present a poster, "Evaluating the Effects of Chemical and Cultural Management Practices on the Population Dynamics of Tadpole Shrimp (Triops longicaudatus) in California Rice." (Research by J. B. Bloese, L. Espino, K. Goding, L. D. Godfrey). Ongoing research is focused on developing pest management methods in rice to reduce the need for insecticide use while still producing a profitable crop.

The program will begin at 8:30 a.m. with a general session that serves as the annual membership meeting. Posters and demonstrations will be displayed during registration until after lunch.

Field tours of research will emphasize progress on rice variety improvement, and disease, insect pest, and weed control. The program will conclude at noon with a lunch that includes...guess what?...drum roll...rice.

And the fall armyworm? If not controlled, the pest can wreak havoc on crops such as rice. The pest is the larva or caterpillar of the moth, Spodoptera frugiperda. The armyworm apparently gets its name because an "army" of caterpillars will eat everything in sight and then move on to anything out of sight.

Sort of like "eating you out of house and home." 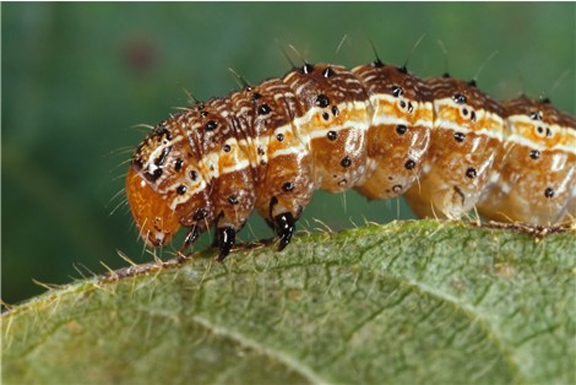 Characterized as having a wonderful sense of humor, an always-ready smile and quick wit, Vern Burton was also an avid golfer. That's why a “Putt One for Vern” contest will be included in the reception festivities.

Vern was born in Omaha, Neb., on June 3, 1924, the only child of John and Vesta Burton. He spent his childhood in several states: Nebraska, Minnesota and Illinois before his father, in the tire business, moved his family to Los Angeles in 1939.

In July 1943, young Vern was inducted into the U.S. Army and sent to Camp Adair, Ore., to a new wartime infantry division – the 70th Infantry “Trailblazer” Division. Burton would later say that his three years in the Army proved to be “a great educational experience and quite an adventure for someone just out of high school." He landed in Marseille, France on Dec. 15, “the day the Germans launched the Battle of the Bulge.  “I went overseas as a squad leader (Battle of the Bulge) and came back as a platoon sergeant." He received his honorable discharge in April 1946.

It was while he was completing basic training in the Willamette Valley, Oregon, that he met his future wife, Charlotte McKnight. They were married for more than 66 years. The couple raised two daughters, who in turn gave them four granddaughters.

Young Vern earned a bachelor's degree in entomology from UC Berkeley and a master's from LSU. He retired from his entomological career in December 1988.

Back in the fall of 2009, we interviewed Vern Burton for a feature story. He was 85 then and residing in the University Retirement  Community.

"Vern Burton didn't set out to become an entomologist.

"Home from the World War II battlefields, he enrolled in Compton Community College and then the University of California, Berkeley.

"A family friend promised him a job in his termite control business once he finished his studies.

"His college associates, however, couldn't envision 'Vern and termites' in the same sentence.

Burton told us during the interview: "There were better things to do in life than crawling under a house looking for termites."

So began a 38-year career that would encompass 10 years as a Kern County Farm Adviser and 28 years as an Extension entomologist affiliated with the UC Davis Department of Entomology. During his career, Burton worked with crops such as alfalfa, beans, cotton, potatoes, small grains and sugar beets and helped resolve pest problems through integrated pest management (IPM) strategies and close associations with university researchers.

Burton enjoyed working with researchers like noted alfalfa seed expert Oscar Bacon, now a retired professor and former chair of the UC Davis Department of Entomology. “I'd help identity problems in the field and take them back to the researchers” he told us. "I always enjoyed helping people in ag and urban settings with their insect problems,” Burton said, “or their perceived problems.”

When Burton retired in December 1988, then Cong. Vic Fazio lauded him for his outstanding contributions to California agriculture, particularly in the field of IPM. In remarks entered into the congressional record on Jan 4, 1989, Fazio said that Burton “contributed greatly to California agriculture and to the University of California's mission for excellence in agricultural research, education and public service.”

“Mr. Burton's outstanding contributions include the development of innovative methods and strategies for nematode control in cotton, which have improved production while reducing pesticide use. He also aided in the development and establishment of treatment thresholds for green peach aphid on sugar beets and established and supervised the cotton pest management program in the San Joaquin Valley in the 1970s. That work resulted in the appropriation of permanent federal funds for an integrated pest management program.”

"Other successes included more effective and efficient control of lygus bugs and spider mites on dry beans, development of a successful pest management program on Burbank potatoes, and investigations on an aphid believed to be a serious insect pest on small grains. Mr. Burton helped prove that the aphid actually had no significant impact on grain yields and thereby insecticide use was markedly reduced.”

Fazio noted that over the years, Burton “has provided support and guidance to county programs conducted by Farm Advisors through field test pilot activities, recommendations, and suggestions for problem solutions, and printed information and participation in educational programs. He has also helped disseminate education and informative entomological information to a diverse clientele in agricultural and urban areas throughout the state.”

"Vern was dedicated to California growers, and worked tirelessly to provide new and useful information to them,"  IPM specialist Frank Zalom, professor of entomology at UC Davis, told us. "He understood the research-extension continuum better than most people ever could, having served the university as an extension entomologist in the county and also here on campus.”

Burton and his wife, a retired 20-year accountant with the UC Davis Viticulture and Enology Department, moved into the University Retirement Community, Davis, in 2004.

In his early retirement years, he served as a lieutenant governor in 1992-93 of Division 7, Kiwanis International; worked four years in the UC Davis Medical Center gift shop and helped with the Kiwanis Family House at the Med Center. He traveled with his family, played golf and fished.

A favorite activity since childhood was “to get up early and go fishing in the morning and fry it for breakfast the same day.”

Emeritus Extension Apiculturist Eric Mussen, who joined the UC Davis Department of Entomology faculty in 1976 and retired in 2014, remembers Vern as a “dedicated scientist with a terrific sense of humor.” They shared office space with two other scientists on the third floor of Briggs Hall.

Vern claimed that bees would always single him out for special attention, Mussen said.

“Whenever I'd watch a honey bee demonstration in alfalfa and clover fields (which bees pollinate), honey bees would find me and deposit their stinger," Burton told us. "I'd stay out of the fields if they just moved in the honey bees.”

At age 85, Vern was enjoying retirement: spending time with his wife, reading mysteries, using his computer (“I used to be scared to death of computers and since my retirement, I've become friends with it”), playing computer card games (bridge, poker and hearts) and watching occasional sports on TV, especially professional golf and football (he played football in high school) and college baseball and basketball.

Remembrances can be posted on the online guestbook at http://www.wiscombefuneral.com/ 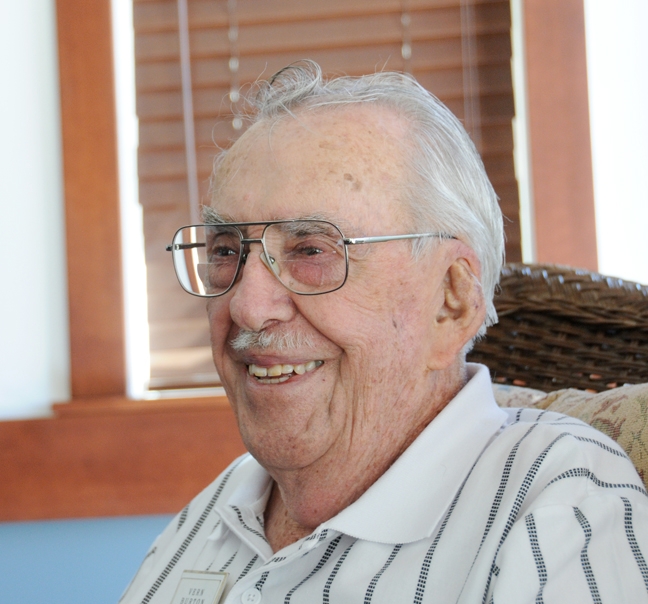