Bug Squad
sitenum=63
Happenings in the insect world
To Be a Fly on Friday, What a Day!

To be a fly on Friday, what a day!

Entomologists who came up with "Friday Fly Day" are having a lot of fun posting images on social media of flies on Friday.

If you access WikiHow, "What to Do on a Friday Night," you'll find all kinds of suggestions. For instance:

Nowhere, but nowhere, does it say to take an image of a fly on Friday.

This one is a syrphid fly, aka flower fly or hover fly (and often mistaken for a honey bee) foraging on a blanket flower, or Gaillardia.

Gaillardia, a genus in the sunflower family, Asteraceae, is named for an 18th century French magistrate/botanist, Maître Gaillard de Charentonneau.

Cheers to a syrphid fly on "his" flower. (Well, it is a pollinator) 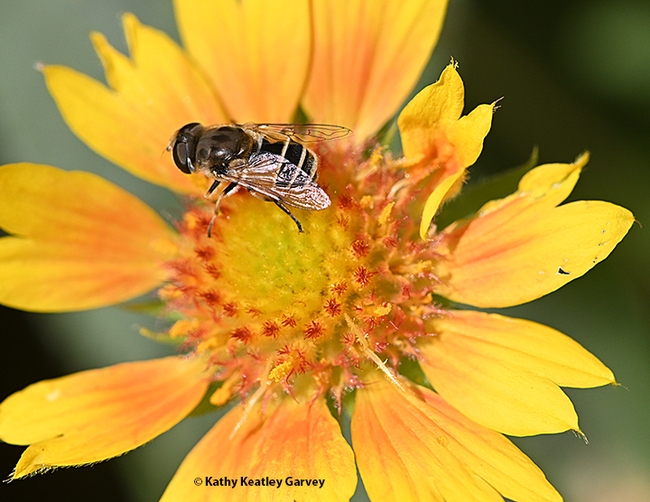 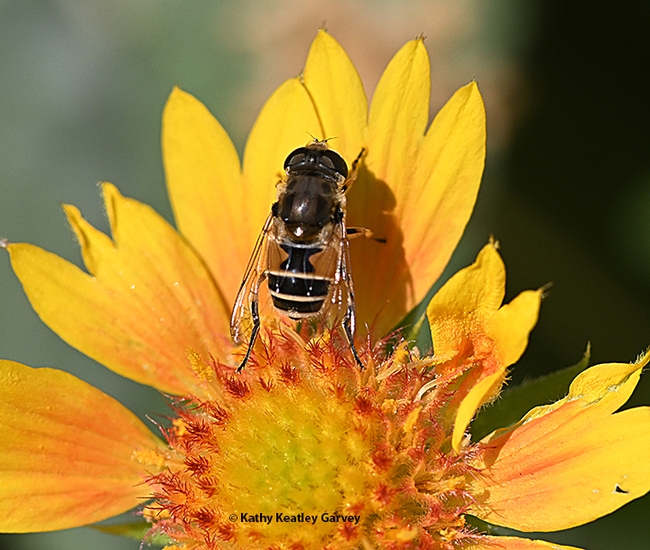 Nothing says National Pollinator Week more than a honey bee coated in pollen.

You can register your activities--make that "socially distant activities" to the official Pollinator Week events map.

You can request local buildings to light up yellow and orange in support of pollinators.

You can sign and mail proclamations to your governor in support of Pollination Week.

And, you can celebrate the week by taking an image of a pollinator.

We ventured over to the UC Davis Ecological Garden, Student Farm, Agricultural Sustainability Institute, to capture these two images of a honey bee blanketed with pollen as she foraged--appropriately--on a blanket flower, Gaillardia. The plant is a member of the sunflower family, Asteraeae, and native to North and South America.

The Pollinator Partnership, which sponsors National Pollinator Week, points out that about 75 percent of all flowering plant species "need the help of animals to move their heavy pollen grains from plant to plant for fertilization."

Are you ready for National Pollinator Week? 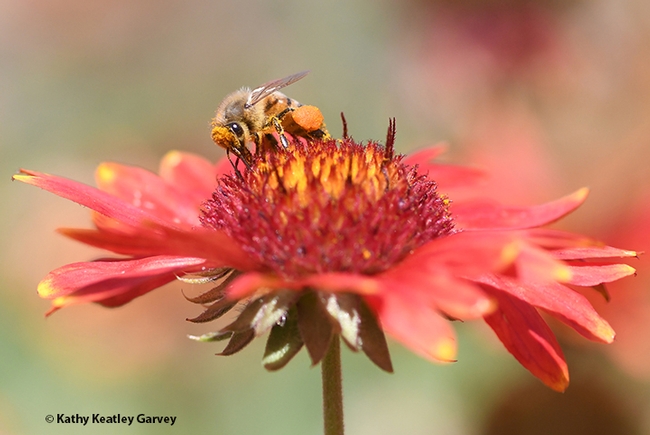 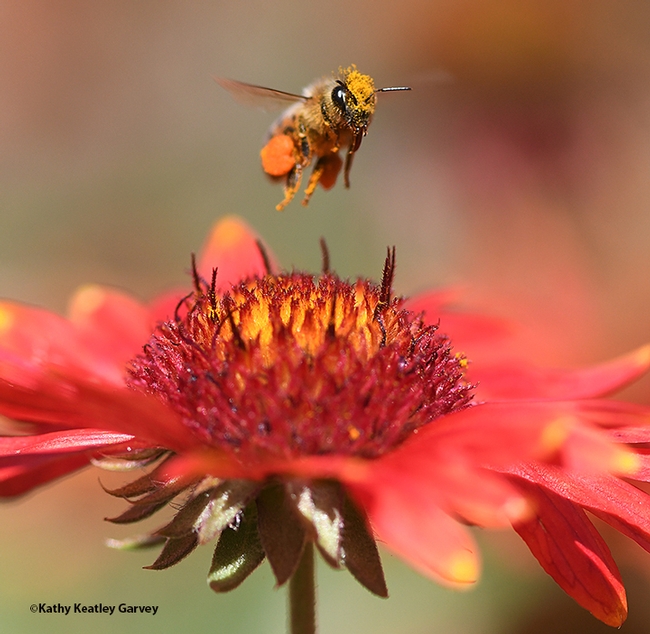 You may have lost track of the hours, days, weeks and months due to the coronavirus pandemic, but how can you forget National Pollinator Week?

Especially if you've ventured out in your yard, garden or park and witnessed the pollinators doing what they do best.

National Pollinator Week, set June 22-28, is a "time to celebrate pollinators and spread the word about what you can do to protect them," according to the sponsor, Pollinator Partnership.

As they write on their website: "Thirteen years ago the U.S. Senate's unanimous approval and designation of a week in June as 'National Pollinator Week' marked a necessary step toward addressing the urgent issue of declining pollinator populations. Pollinator Week has now grown into an international celebration of the valuable ecosystem services provided by bees, birds, butterflies, bats and beetles."

"We urge everyone to hold a socially distant, appropriate event. In an effort to lighten the load on state governments during this time, we are not pursuing formal state proclamations this year, but will continue to post proclamations that we do receive. Moreover, we encourage everyone to go outside and spend some time with the bees and butterflies that inspire hope in many."

And, when we think of Pollinator Week, we think of the honey bee totally dusted with pollen on a blanket flower, Gaillardia, in our pollinator garden in Vacaville, Calif.

The bee just couldn't get enough of the pollen. 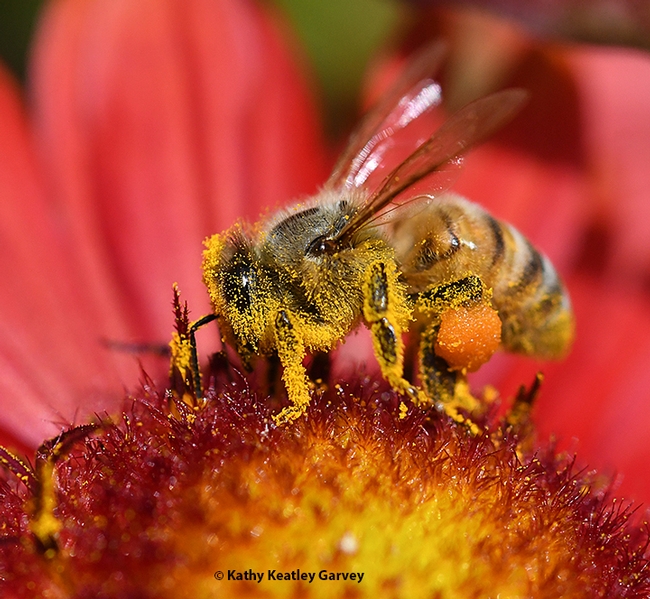 Every year on May 20, the United Nations asks us to think about this day, "to raise awareness of the importance of pollinators" and "the threats they face and their contribution to sustainable development."

Some 20,000 species of bees inhabit our world, but the "poster child" is the honey bee, Apis mellifera.

"The recent COVID-19 pandemic has had an undeniable impact on the beekeeping sector affecting the production, the market and as a consequence, the livelihoods of beekeepers," the World Bee Day website tells us.

"To mark the Day, a virtual event--under the theme "Bee Engaged"--highlighted the importance of traditional knowledge related to beekeeping, the use of bee-derived products and services, and their importance in achieving the SDGs. If you missed it, you can watch it here!"

"To celebrate #WorldBeeDay, renowned actors, singers, chefs and media professionals also recorded poems related to bees and beekeeping, some recalling how the behavior of bees so often mirrors that of human beings across our planet. Listen to the poems now and bee inspired."

Meanwhile, a pollen-dusted honey bee in our pollinator garden in Vacaville, Calif., totally engaged us as she foraged on Gaillardia, aka "blanket flower." Gaillardia, a member of the sunflower family Asteracae, resembles the colorful maroon and gold Native American blankets. It's named for 18th century French magistrate and botanist Maître Gaillard de Charentonneau.

This honey bee went about her bee-sy-ness and then, weighted with pollen, took flight. It's a wonder she could see to return home to her colony. 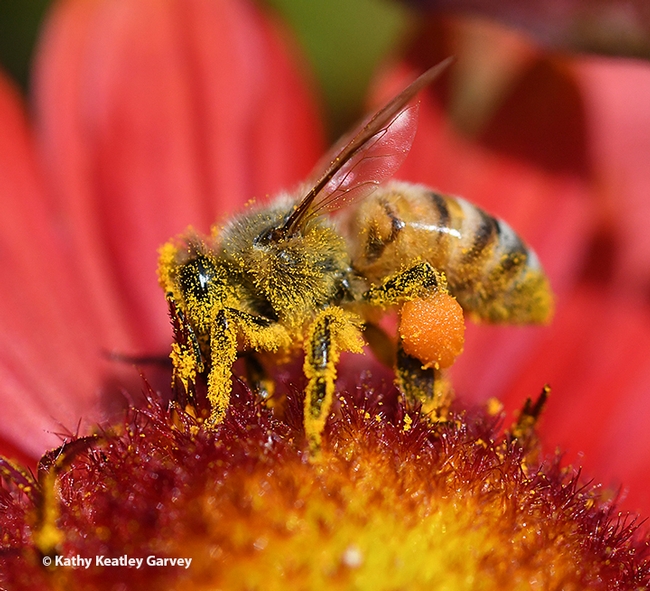 A honey bee dusted with pollen from Gaillardia, also known as "the blanket flower." (Photo by Kathy Keatley Garvey) 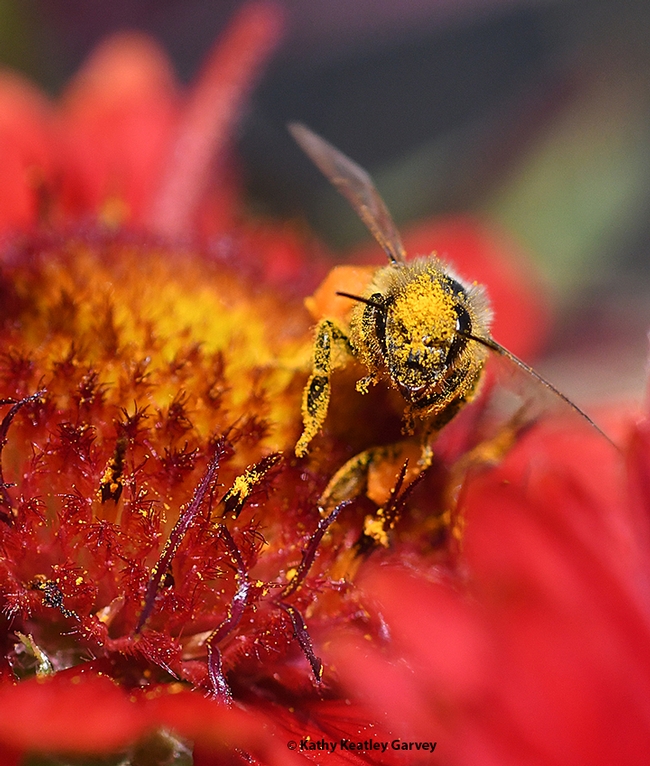 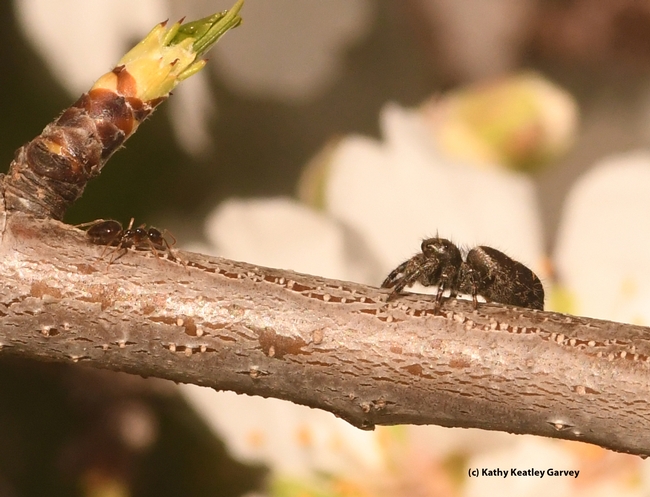 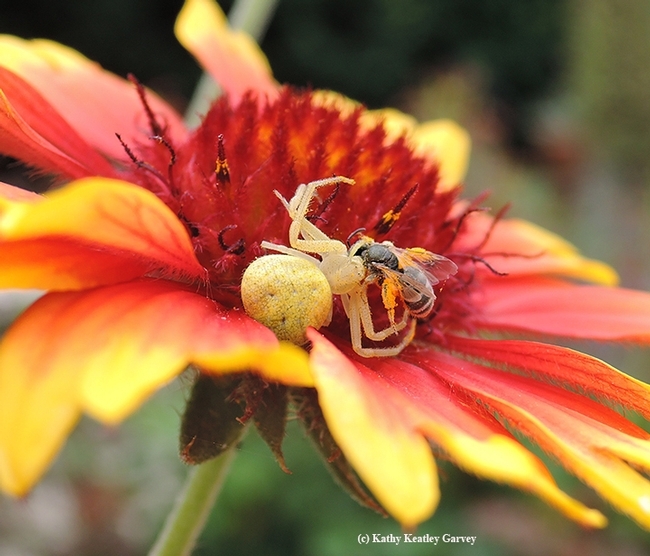 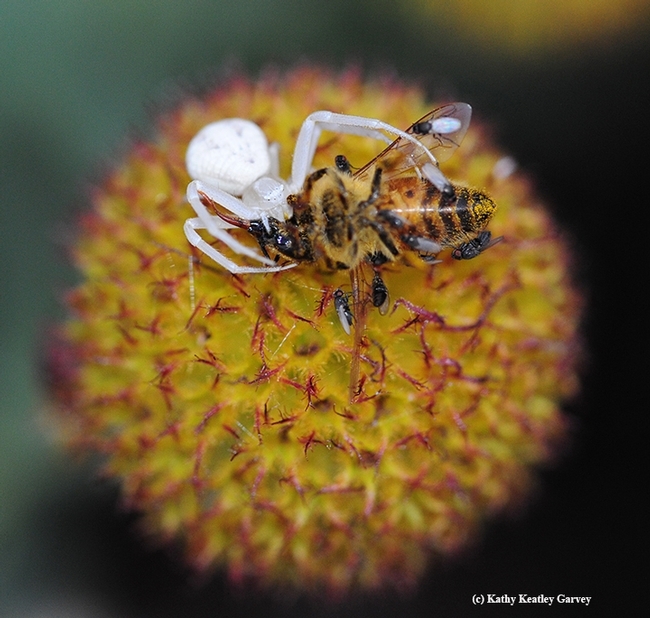