A newly published study in the Proceedings of the National Academy of Sciences reveals just how much trouble. (See research paper)

Wild bee populations have declined significantly since 2008 in Central California and some other key areas of the United States, according to the study led by a University of Vermont researcher and co-authored by UC Davis researchers.

The study, led by Insu Koh of the Gund Institute for Ecological Economics at the University of Vermont, Burlington, suggests that wild bee populations likely declined in areas comprising 23 percent of the nation between 2008 and 2013, a decline associated with conversion of natural wild bee habitat into intensive agriculture. Insu Koh led the research team. (University of Vermont photo)
The paper, titled “Modeling the Status, Trends and Impacts of Wild Bee Abundance in the United States,” was published at 3 p.m. (ET) Dec. 21.

Their study also shows 39 percent of U.S. croplands that depend on pollinators face a threatening mismatch between rising demand for pollination and a falling supply of wild bees.

“We see striking mismatches in many places between the demand for pollination and the ability of wild pollinators to support that need,” said Williams, an associate professor in the UC Davis Department of Entomology and Nematology, who helped design the study and led efforts to assess bee habitat quality as part of the Integrated Crop Pollination (ICP) Project (http://icpbees.org/).

“Indeed it is crops where demand has most increased that we estimate greatest decline in wild pollinator supply,” Williams said. “The research is also unique in including uncertainty in our knowledge of the quality of habitat for pollinators and thus recognizes where more effort is needed to understand the vulnerability of pollination services."

Williams (who, by the way is a newly selected UC Davis Chancellor's Fellow, an honor given to outstanding faculty members early in their careers), noted that the paper has the potential to bring wider attention to the correlation between the status of wild bee communities and crop pollination demands nationally.

Indeed, it does and we need to value our wild bees and protect them.

"Until this study, we didn't have a national mapped picture about the status of wild bees and their impacts on pollination,” Koh said. More than $3 billion of the U.S. agricultural economy depends on the pollination services of native pollinators like wild bees. (See University of Vermont news release.)

It was back in June 2014 when President Obama sounded the alarm in a widely quoted presidential memorandum calling for a national assessment of pollinators to promote the health of honey bees and other pollinators.

This latest research zeroes in on that.

The study was completed with support from the Specialty Crop Research Initiative of the U.S. Department of Agriculture's National Institute for Food and Agriculture. 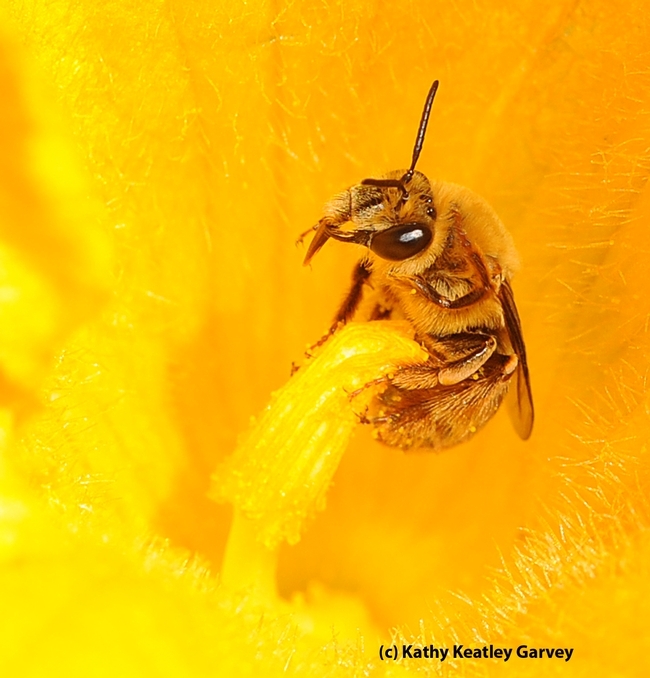 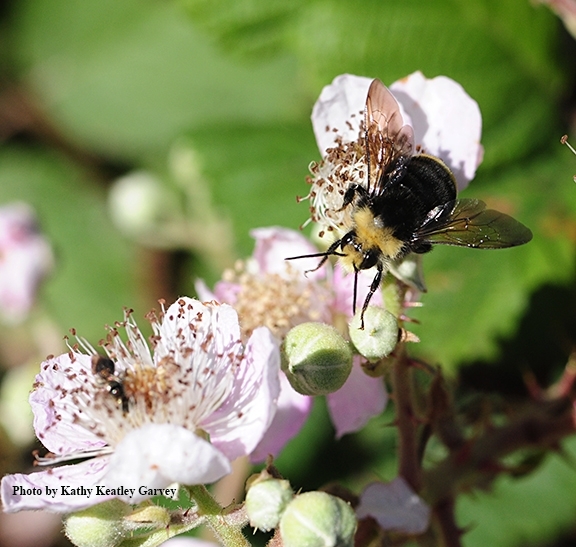 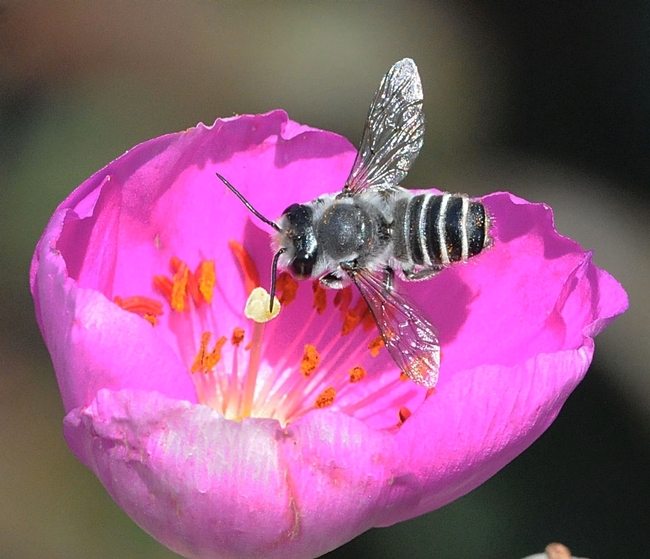 Leafcutter bees pollinate alfalfa, carrots, other vegetables and some fruits. This one is foraging on a rock purslane. (Photo by Kathy Keatley Garvey)