What native California plants are best for attracting pollinators? Three pollination ecologists from the University of California, Davis, have just published their research, “Identifying Native Plants for Coordinated Habitat Management of Arthropod Pollinators, Herbivores and Natural Enemies,” in the Journal of Applied Ecology. It details what plants proved most attractive to honey bees, wild bees and other pollinators, as well as what drew such natural enemies as predators and parasitic wasps.

“I hope this study can inform selection of plants that support pollinators and natural enemies without enhancing potential pests,” said lead researcher and first author Ola Lundin, a former postdoctoral fellow in the Neal Williams lab, UC Davis Department of Entomology and Nematology and now a postdoctoral fellow in the Department of Ecology, Swedish University of Agricultural Sciences, Uppsala.

He and co-authors Williams, professor of entomology and a Chancellor's Fellow at UC Davis; and project specialist Kimiora Ward of the Williams lab conceived the ideas and developed the methodology for the research project.

The trio established 43 plant species in a garden experiment on the grounds of the Harry H. Laidlaw Jr. Honey Bee Research Facility at UC Davis. They selected plant species that were drought-tolerant; native to California (except for buckwheat, Fagopyrum esculentum, known to attract natural enemies and widely used in conservation biological control); and, as a group, covered a range of flowering periods throughout the season. The Great Valley gumplant (Grindelia camporum) was one of the 43 plants tested. Here a cuckoo bee, Triepeolus Epeolus, forages on a blossom. (Photo by Kathy Keatley Garvey)
Every week, over a two-year period during the peak bloom of each plant species, they engaged in three different sampling techniques: netting wild bees, observing honey bees, and vacuuming insect herbivores, arthropod predators and parasitic wasps. Phacelia californica was among the 43 plants tested. Here a bumble bee, Bombus vandykei, and a honey bee, Apis mellifera, share a blossom. (Photo by Kathy Keatley Garvey)
“It was fascinating for me to see how these and other plants flowering in the latter part of the summer not only survived but also seemed to enjoy themselves in the heat without water for months!” Lundin quipped.

(Note: An upcoming Bug Squad blog will list the 43 plants the researchers used.) 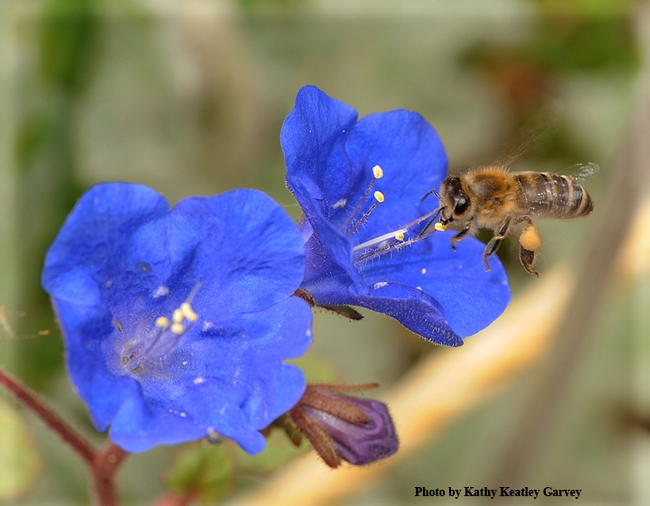 Phacelia campanularia was one of the 43 plants tested in the UC Davis research garden. Here a honey bee sips nectar from a blossom. (Photo by Kathy Keatley Garvey) 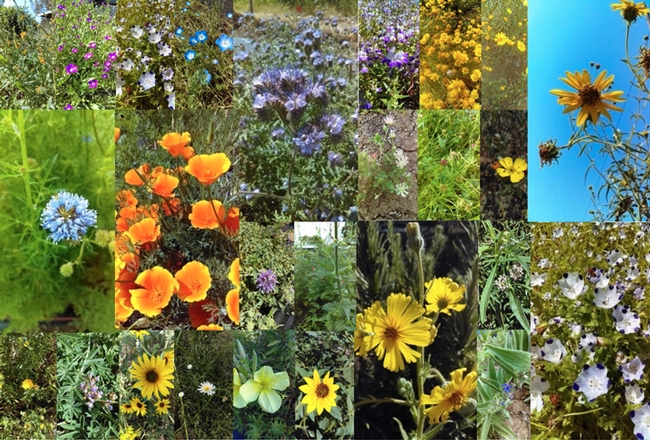