A female praying mantis, Mantis religiosa, climbs a stem after a gardener watered the plant. (Photo by Kathy Keatley Garvey)
Do you know where your praying mantids are?

Water a bush or a plant frequently visited by bees and other pollinators, and if they're in there, they're likely to emerge.

Such was the case when a male praying mantis, Mantis religiosa, emerged from our pomegranate bush. No spray zone, please.

Frankly, he looked a bit irritated.

The next week a female M. religiosa emerged from a plant in our neighbor's yard.  She, too, looked a bit irritated.

Praying mantis expert, Lohit Garikpati, a UC Davis entomology student who rears mantids and volunteers at the Bohart Museum of Entomology, confirmed their identities and gender.

The European mantis, or Mantis religiosa, belongs to the family Mantidae ("mantids"), the largest family in the order Mantodea. As all insect enthusiasts know, they derive their common name by their distinctive posture of "praying." (Some entomologists like to think of them as "preying" mantids.)

The females are usually larger and heavier but the antennae and eyes of the males outsize the females.

"Along with the forward directed compound eyes there are also simple eyes to be found on the head," Wikipedia tells us. "These three dorsal ocelli are also more pronounced in males than in females.Male individuals are often found to be more active and agile whereas females are physically more powerful. One of the outcomes of these morphological variations is that only males and very young females are able to fly. Adult females are generally too large and heavy for their wings to enable a take-off."

In Germany, M. religiosa is listed as ‘threatened' on the German Red List. That means finders aren't supposed to be keepers: don't catch it or keep it as a pet.

The status of the male and female mantids in our neighborhood? They're still there in their respective yards. If they meet, however, the male may lose his head in the well documented phenonomen of sexual cannibalism...nature's way of better survivability--not for the male but for his offspring!

"Eating her mate provides the female with a lot of nutrients she doesn't have to hunt for," according to Wikipedia. "She has a prey item available that is bigger than the prey she would be able to catch in the manner she usually hunts. The meal also takes place during or shortly after she was fertilized giving her more resources for the faster production of a large ootheca with large eggs, increasing the chance of her offspring to survive. Males have also been known to be more attracted to heavier, well-nourished females for this reason."

There's a lesson in there somewhere! 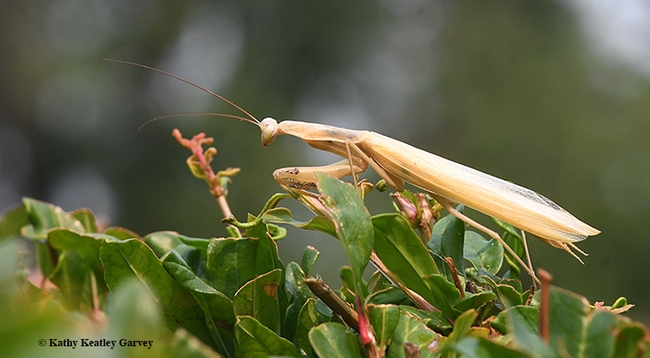 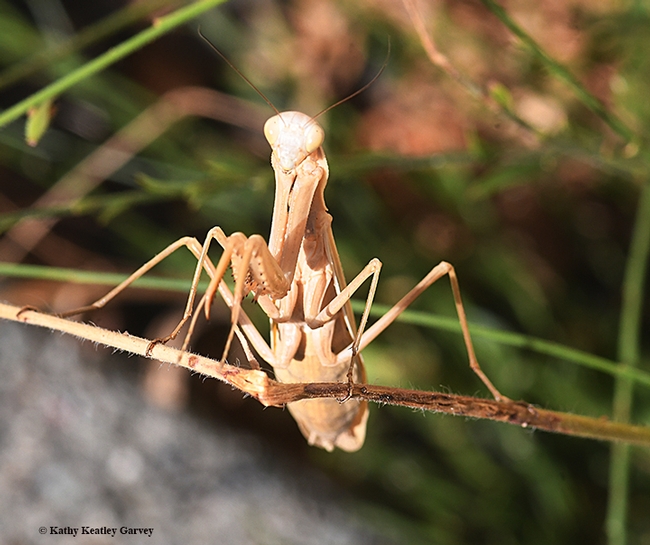