Honey bees were all over the Japanese anemone (Anemone hupehensis) on Monday, Oct. 19 at the Luther Burbank Home and Gardens, Santa Rosa.

They just could not get enough of the colorful flower, also known as a windflower or thimbleweed. Thought to be a native of central China, the hupehensis is distinguished by its five rounded, evenly spaced petals. However, the wind and rain earlier knocked off a few petals, adding to their character and charisma.

Robert Fortune (1812-1880) introduced the Chinese plant to Europe in 1844. He apparently discovered it in a Shanghai cemetery while he was running around the tombstones.

Now the "windflower" is just one of the flowers that graces the Luther Burbank Gardens.

On our visit to the gardens, we could almost see Luther Burbank puttering around.  Born on a farm in Lancaster, Mass. in 1849, the 13th of 15th children, he moved to Santa Rosa in 1875 and built a nursery and greenhouse to pursue his work as a botanist, horticulturist and pioneer in agricultural science. He  also maintained a working farm, The Gold Ridge Farm, in nearby Sebastopol. Both are open to the public.

Over his 55-year career, Burbank  developed more than 800 strains and varieties of plants, including varied fruits, flowers, grains, grasses, and vegetables.

If you haven't been to the Luther Burbank Home and Gardens or to the Gold Ridge Farm, you should go--and see what he developed, from the Shasta daisy to the Russet Burbank potato to the Santa Rosa plum.

And check out the honey bees foraging on the flowers... 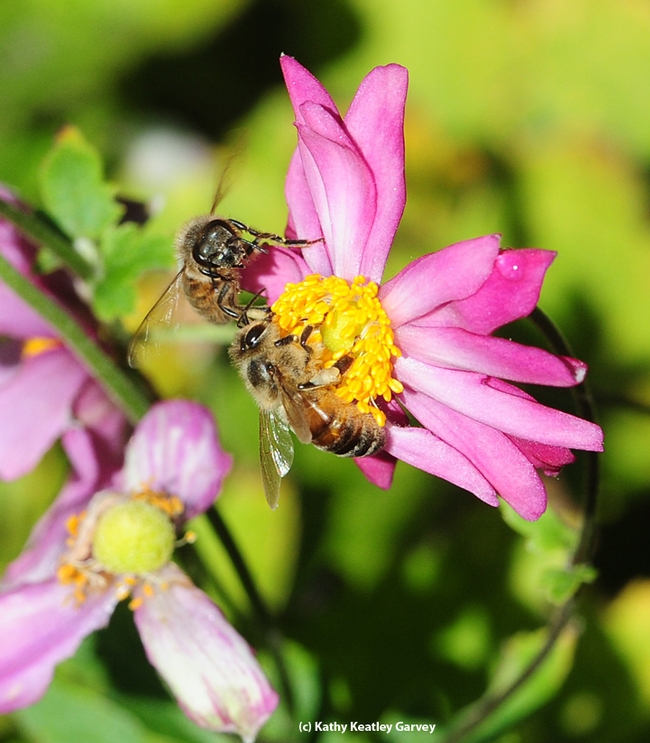 Two honey bees compete for floral resources as they forage on a Japanese anemone in the Luther Burbank gardens, Santa Rosa. (Photo by Kathy Keatley Garvey) 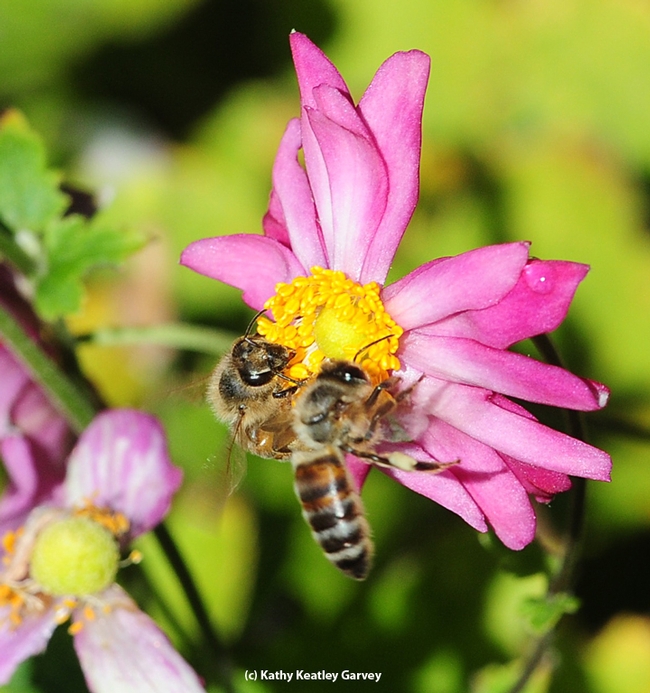 This flower is mine. No, it's mine! (Photo by Kathy Keatley Garvey) 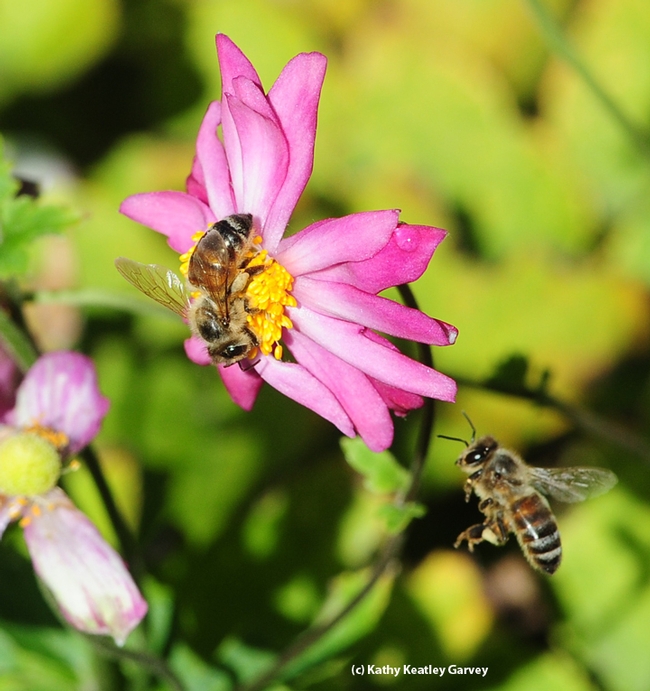 After one honey bee leaves, another returns. (Photo by Kathy Keatley Garvey) 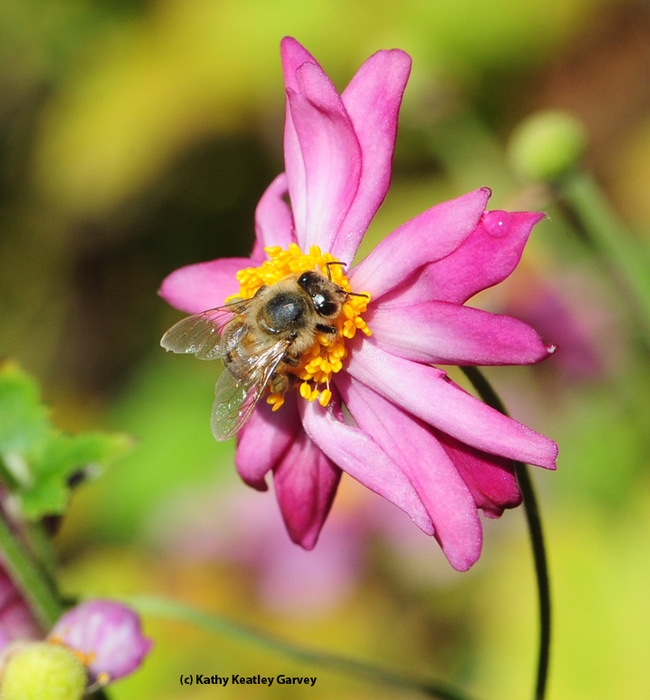 Makes sense that the sunflower bee (Svastra spp.) forages on the genus Cosmos.

Cosmos (also the common name) is a member of the sunflower family, Asteraceae.

On a recent trip to the Luther Burbank Home and Gardens in Santa Rosa, we spotted scores of sunflower bees on cosmos, each bee packing a heavy load of golden pollen.

There was a pollen party going on, pure and simple.

Although the sunflower bee, as a floral visitor, is often mistaken for a honey bee, there's no mistaking that this is a pollinator, too. 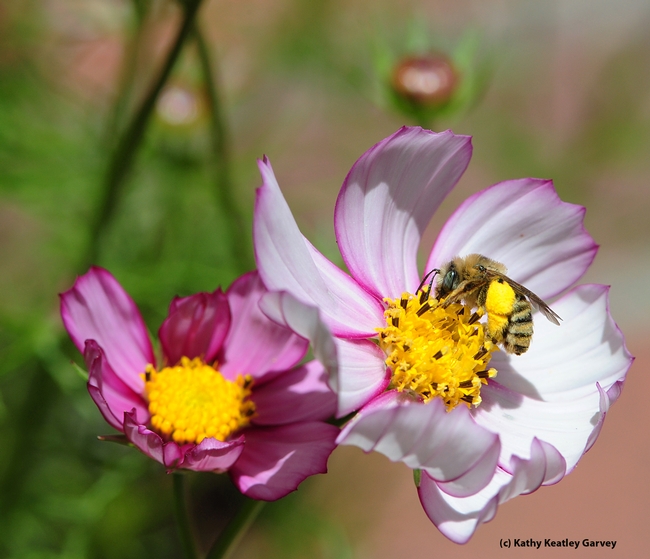 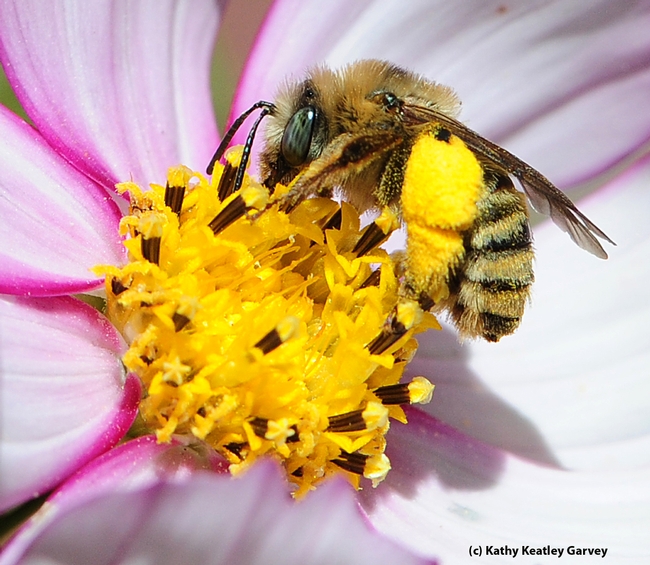