The conference, themed "Multidimensional Solutions to Current and Future Threats to Pollinator Health," opened Thursday night with registration and a reception in the Good Life Garden at the Robert Mondavi Institute on Old Davis Road, UC Davis campus.

The UC Davis Honey and Pollination Center, directed by Amina Harris, is organizing the conference, with Elizabeth Luu of the Center serving as the events manager.

Presentations began Thursday morning in the ARC Ballroom with Williams delivering the welcoming speech. Keynote speaker Lynn Dicks, research fellow with the School of Biological Sciences, University of East Anglia, UK--she works on sustainable farming and conservation of wild pollinators--addressed the crowd on "The Importance of People in Pollinator Conservation."  (More to follow.)

The next keynote speaker is Christina Grozinger, distinguished professor of entomology and director of the Center for Pollinator Research at Pennsylvania State University. She will speak on "Bee Nutritional Ecology: From Genes to Landscapes" at 9 a.m., Friday, July 19.

Grozinger and Rufus Isaacs, a professor with the Michigan State University's Department of Entomology, launched the International Pollinator Conference in 2012. They are held every three years. This is the first one at UC Davis. Noted bee conservationist Lynn Dicks of the University of East Anglia, UK, served as the keynote speaker Thursday at the International Pollinator Conference. (Photo by Kathy Keatley Garvey)
Among those attending the Thursday night reception were conference speaker Phyllis Stiles of the Xerces Society for Invertebrate Conservation, based in Portland, Ore., and Terry Ryan Kane of Ann Arbor, Mich., a honey bee veterinarian and beekeeper known as "Dr. Terry."

Stiles, Bee City USA founder and pollinator champion, serves as a Xerces Society science advisor.  She launched Bee City USA, now an initiative of the Xerces Society, in June 2013. Stiles was named the North American Pollinator Protection Campaign's "United States' Pollinator Advocate of the Year" in 2015.  "My days are now filled with learning all I can about pollinators, native plants, pesticides, and what people can do to support the 200,000+ species of hardworking pollinators that sustain our planet," she says.

Stiles will speak on "Urban Pollinator Conservation: Bee Campus USA and "Bee City USA as a Model for Meaningful Community Engagement" on Saturday afternoon, closing out the conference.

Dr. Terry, who has practiced veterinary medicine for more than 35 years, founded Michigan's first feline-only hospital, serving there for 22 years.  She now owns https://www.a2beevet.com./  A  member of the American Veterinary Medical Association, she serves on the Committee on Environmental Issues and periodically lectures to veterinary schools and conferences on honey bee medicine. Dr. Terry is also a volunteer member of World Vets, which provides veterinary medical services to underserved areas worldwide. "For fun" she flies her Cessna 172, and in 2015 participated in the Women's Air Race Classic started by Amelia Earhart and friends in 1929. She was recently elected secretary of The Honey Bee Veterinary Consortium earlier this year. (See more on her website.)

Saturday
Among the speakers at Saturday's session on "Pollinators in Urban Environment," which starts at 1:40, will be two from UC Davis.  Elina Nino, director of the California Master Beekeeper Program, will discuss the program and honor the newest Master Beekeepers. Rachel Vannette, assistant professor, UC Davis Department of Entomology and Nematology, will discuss "Linking Pollinator Heath, Microbiome Composition and Human Provisioning in Anna's Hummingbird (Calypteanna). (See schedule.)

Robbin Thorp Tribute
At the entrance to the ARC Ballroom is a poster, created by Professor Williams, that pays tribute to the late global bee authority Robbin Thorp (1933-2019), distinguished emeritus professor of entomology and a tireless advocate of pollinator species protection and conservation. Thorp, 85, died June 7 at his home in Davis.

"Robbin was a member of the UC Davis entomology faculty for 30 years, from 1964-1994, achieved emeritus status in 1994, but continued to engage in research, teaching and public service until a few weeks before his passing," the poster read. "Indeed, his scientific achievements during his retirement rival the typical career productivity of many academic scientists."

"Through his tireless efforts in research, advocacy and education, he has inspired a new generation of bee researchers."

In his retirement, Thorp co-authored two books Bumble Bees of North America: An Identification Guide (Princeton University, 2014) and California Bees and Blooms: A Guide for Gardeners and Naturalists (Heyday, 2014).

Thorp, who assisted scores of the scientists who attend the pollinator conferences,  was an authority on pollination ecology, ecology and systematics of honey bees, bumble bees, vernal pool bees, conservation of bees, native bees and crop pollination, and bees of urban gardens and agricultural landscapes.  Colleague Norman Gary, UC Davis emeritus professor of entomology, says that Thorp was recognized internationally for his expertise and research on bees, especially non-Apis species, known as wild bees. "I doubt that...anyone else in the world...(could) compete with his expertise in the systematics of the 20,000 species of bees on this earth...he was the go-to person to identify a bee by species." A tribute to Thorp and his life's work appears on the UC Davis Entomology and Nematology website. 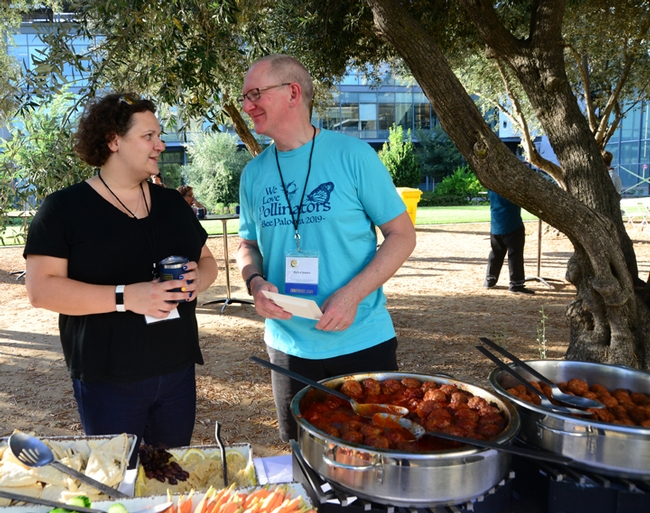 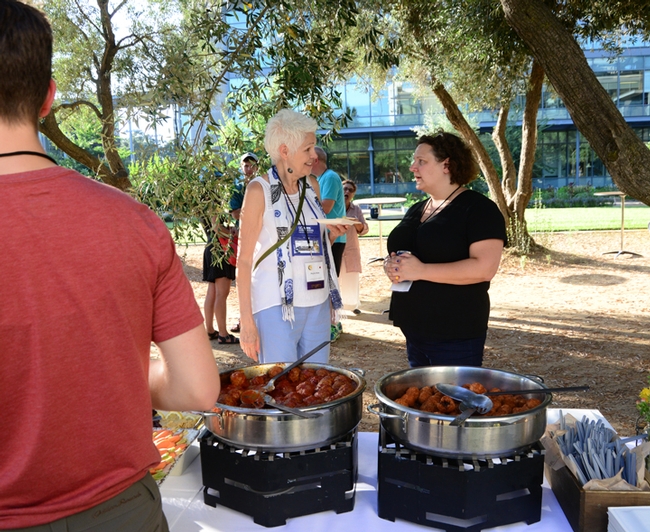 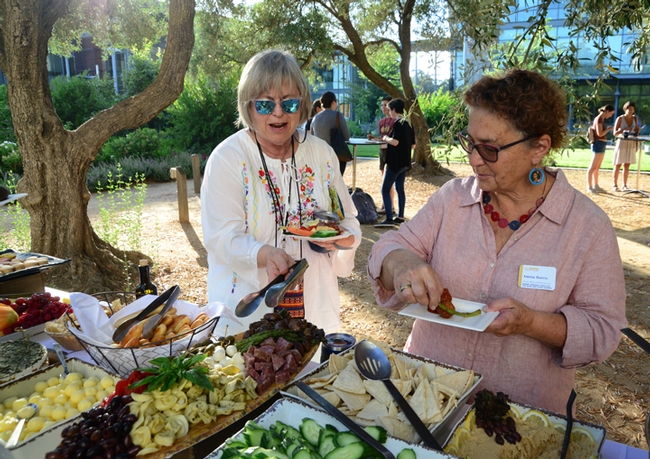 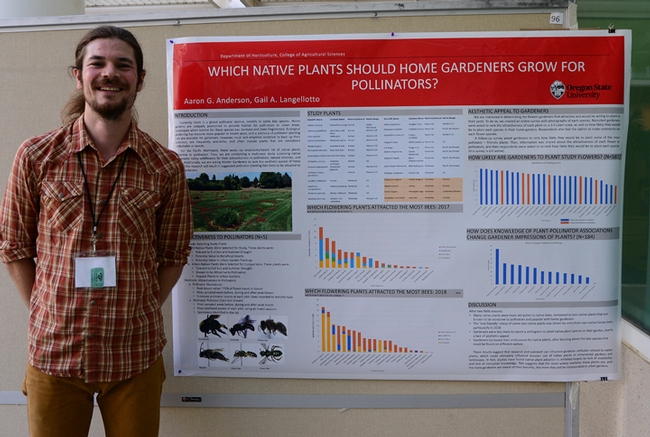 Researcher Aaron Anderson of Oregon State University stands by his poster on "Which Native Plants Should Home Gardeners Grow for Pollinators." Poster sessions are an integral part of the International Pollination Conference. (Photo by Kathy Keatley Garvey) 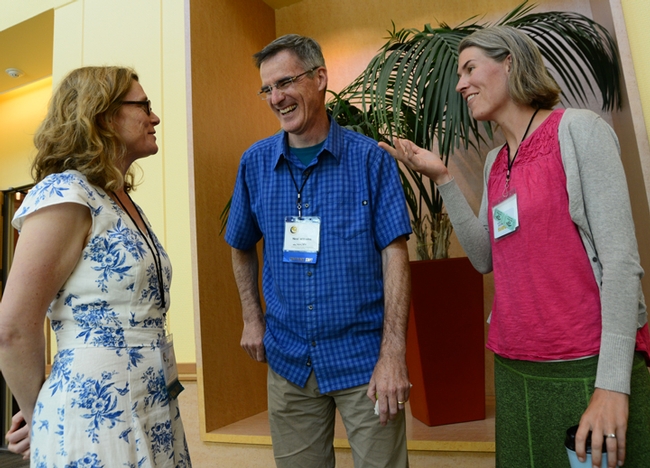