Bug Squad
sitenum=63
Happenings in the insect world
About Those Asian Giant Hornets... Lynn Kimsey, director of the Bohart Museum of Entomology, UC Davis. (Photo by Kathy Keatley Garvey)
The sensationalism. fear-mongering and general panic surrounding those Asian giant hornets, aka "murder hornets," detected last year in British Columbia and Washington state, are enough to curdle both the blood and the brain.

First there were the Africanized honey bees, which sensationalists called "the killer bees."

Now there are the Asian giant hornets (AGH), Vespa mandarinia, which sensationalists have dubbed "murder hornets."

"It's ridiculous to call them murder hornets,” says noted UC Davis wasp expert and researcher Lynn Kimsey, director of the Bohart Museum of Entomology and professor of entomology, UC Davis Department of Entomology and Nematology.

“It's no more likely to sting and kill a human than a honey bee,” said Kimsey, a two-term past president of the International Society of Hymenopterists, an organization that studies bees, wasps, ants, and sawflies.

“Actually it's less likely, as honey bee venom packs quite a punch and it is exclusively designed to defend against vertebrates,” she said. These were the first detections of this species in North America, but there may be more, according to the Washington State Department of Agriculture (WSDA). Beekeepers have reported “observations” (which may or may not be the same species) dating back to October 2019, according to officials in Washington State University's  Department of Entomology and Cooperative Extension. They and the beekeeping organizations want to know what's out there and they want folks to keep a lookout for them.

Said Kimsey: “A decade or more ago there was a colony of another species, Vespa asiatica, reported near the Port of Long Beach but nothing ever came of that either. A European species, Vespa crabro, was introduced into the East Coast perhaps a century ago and it is now fully established in the southeastern U.S.”

Kimsey points out that insects often come in cargo boxes from Asia to U.S. ports, establish colonies, and expand their range.

A soon-to-be-published article in the Entomological Society of America's journal, Insect Systematics and Diversity, promises to shed more light on the genus and the history of introductions in the United States.Kimsey and colleagues Allanmith-Pardo of the USDA and James Carpenter of the America Museum of History, New York, co-authored the review article.

In the abstract, the authors define Vespa as social wasps that are “primarily predators of other insects, and some species are know to attack and feed on honey bees, Apis mellifera, which makes them a serious threat to apiculture.”

“Vespa nests can be physically large, with over 1,000 workers, but usually with hundreds of workers,” they wrote. “Nests can be aerial, attached to tree branches or in shrubs, in crevices, under eaves or underground depending on the species. Depending on the latitude, nests can be either annual, started by a new queen every spring, or perennial, where young queens take over from old ones. Colonies in warm tropical climates tend to be perennial.”

Yes, hornets are huge. They measure about two inches long, and the queens can fly up to 20 miles per day, said Cobey, who examined specimens in Japan last December and shipped some of them to WSU.

The WSU scientists wrote that AGH “is the world's largest species of hornet, native to temperate and tropical Eastern Asia low mountains and forests. The hornet is well adapted to conditions in the Pacific Northwest.”

“The primary purpose of venom is defense against predators by inflicting pain and damage,” they wrote. ”Vespa mandarinia is one of the two most venomous known insects in the world.. The amount of venom each wasp delivers (4.1 μl/ wasp) has designated V. mandarinia as the most venomous insect. In comparison, the honey bee has about 0.6μl/bee. When foraging for food in spring, the AGH is not highly defensive – unless its nest is disturbed. Late summer and fall, with the high demand for protein, they become very aggressive when attacking or occupying a honey bee colony.”

Could we just go back to calling them Asian giant hornets or AGH or Vespa mandarina? 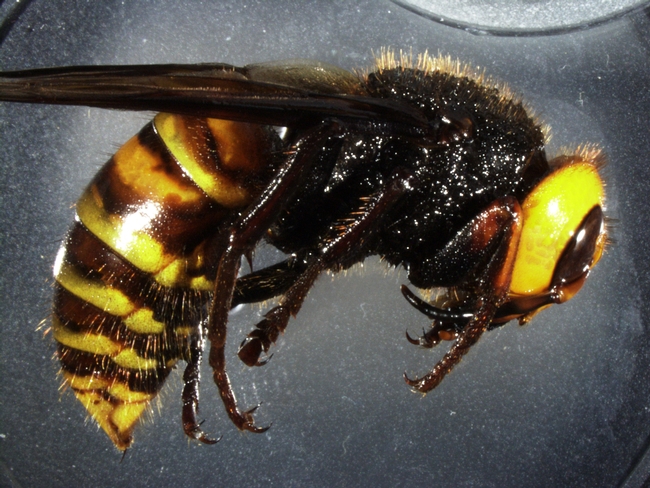