Bug Squad
sitenum=63
Happenings in the insect world
Brother, Can You Spare a Meal?

A freeloader. A moocher. A sponger.

A praying mantis is polishing off the remains of a honey bee. Suddenly a black dot with wings edges closer and closer and grabs a bit of the prey.

So tiny. So persistent. So relentless. That's the freeloader fly.

Look at the freeloader fly. Wait a few seconds and you'll see another.

The scene: a camouflaged praying mantis is tucked beneath some African blue basil leaves and the light is fading fast.  (You could say I took this image "on the fly.")

They are so tiny, Hauser says, that the mantids, spiders and Reduviidae (think assassin bugs) "don't bother chasing them away or even trying to eat them."

Hauser pointed out images of freeloader flies from BugGuide.net: http://bugguide.net/node/view/23319/bgimage

And look at all the freeloaders on this prey: http://bugguide.net/node/view/512989/bgimage

Back in March of 2012, agricultural entomologist Ted C. MacRae who writes a popular blog, Beetles in the Bush,  posted an image of an assassin bug eating a stink bug. Check out all the flies engaging in what he calls kleptoparasitism--stealing food.

Everybody gets fed. Nobody leaves hungry. 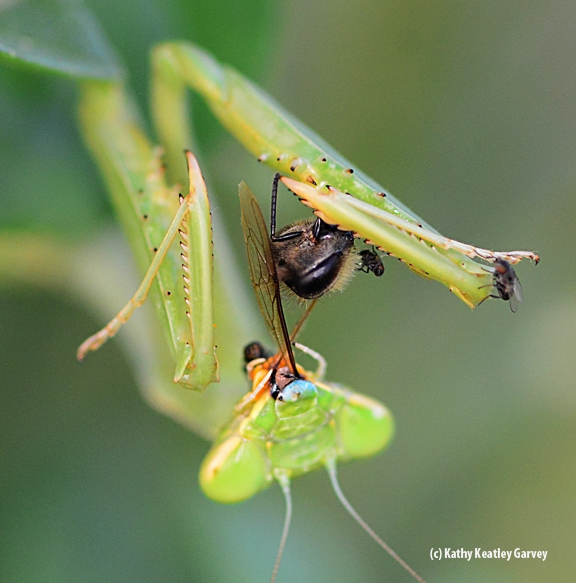 Praying mantis eats a honey bee while a freeloader fly, family Milichilidae, does, too. Another freeloader edges closer. (Photo by Kathy Keatley Garvey) 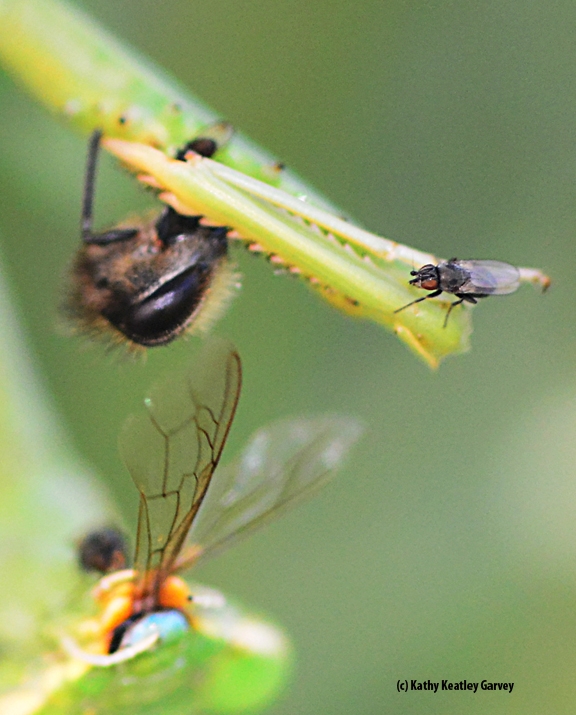