Bug Squad
sitenum=63
Happenings in the insect world
Why Flies Are Pollinators, Too! 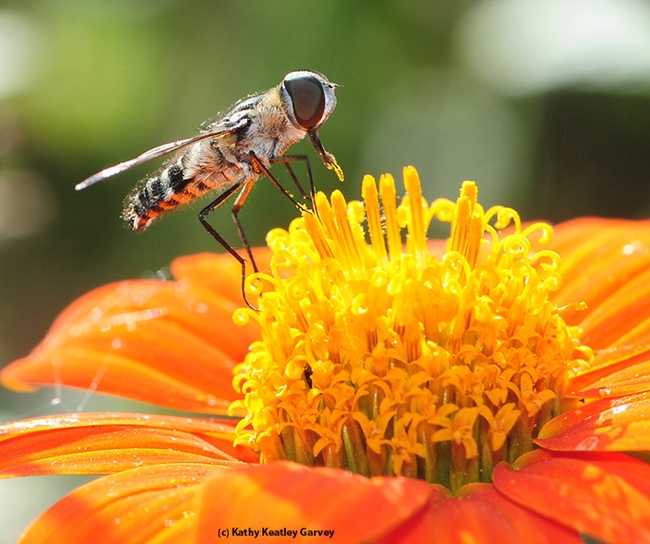 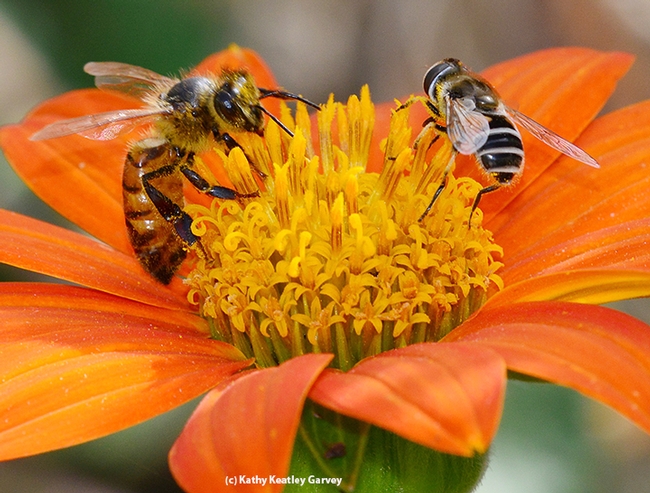 It's a given: Honey bees love lupine.

We watched them buzzing around a flower patch of blue (lupine) and gold (California poppies) today along Hopkins Road, University of California, Davis, west of the central campus.

Those are Aggie colors: blue and gold. And those are Aggie bees, from the nearby Harry H. Laidlaw Jr. Honey Bee Research Facility, operated by the UC Davis Department of Entomology and Nematology, on Bee Biology Road.

Speaking of bees, the Bohart Museum of Entomology is hosting an open house, themed "Pollination Nation," from 1 to 4 p.m., Saturday, March 14 in Room 1124 of the Academic Surge Building, Crocker Lane.

“It will be about bees, bees, bees,” said Lynn Kimsey, director of the Bohart Museum and professor of entomology at UC Davis. The event is free and open to the public. Visitors can converse with bee specialists and view displays of bees from all over the world. Family activities are also planned.

Of the 20,000 bee species identified worldwide, some 4000 are found in the United States, and 1600 in California. The most recognizable, of course, is the honey bee, but it is not a native. European colonists brought it here (Jamestown colony) in 1622. The honey bee didn't arrive in California until 1853.

Bees play a profound role in shaping the world we live in, but many species remain strangers to us, according to native pollinator specialist and Bohart Museum associate Robbin Thorp, distinguished emeritus professor of entomology at UC Davis and a co-author of California Bees and Blooms: A Guide for Gardeners and Naturalists.

Copies of the California Bees and Blooms (Heyday Books) and Bumble Bees of North America: An Identification Guide (Princeton Press), also co-authored by Thorp, will be available in the gift shop.

“Nature has programmed bees to build nests and supply their young with nutritious pollen and nectar, and their unique methods for collecting these resources are fascinating to observe, the authors wrote.  "Their lives are dictated by season, weather and access to preferred flower types and nesting habitat.” 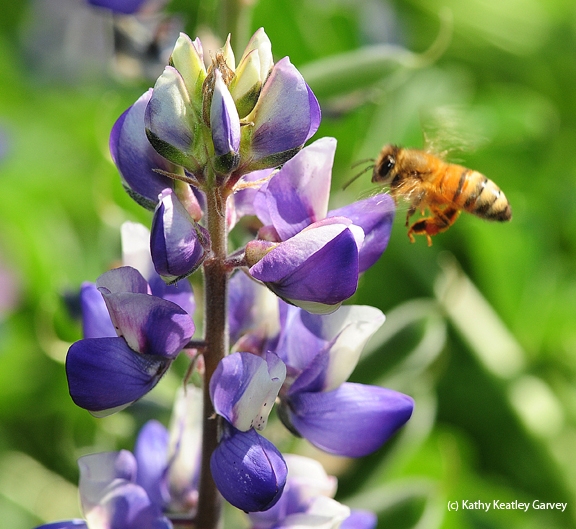 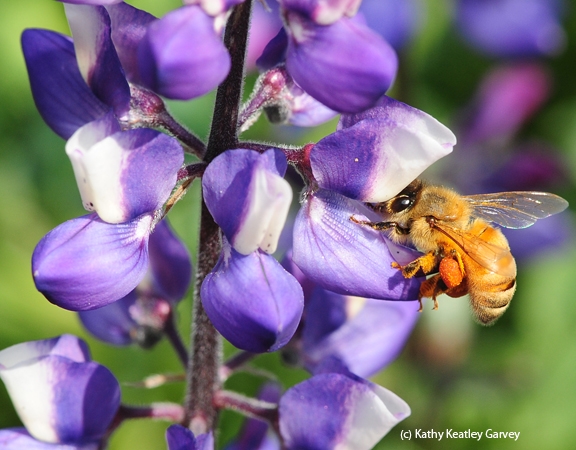 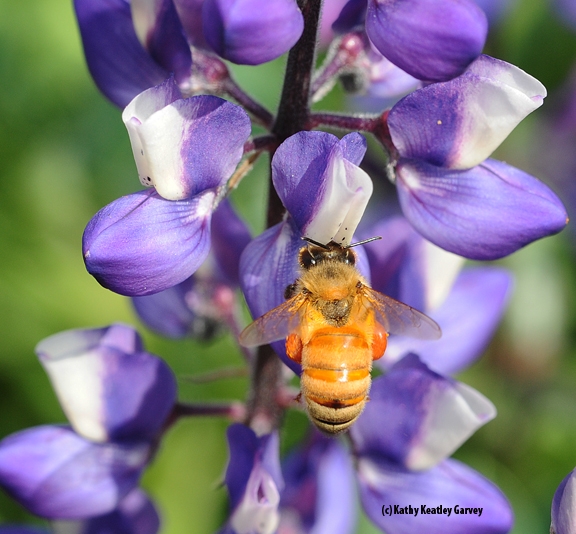 That's the title of a new display at the Bohart Museum of Entomology, University of California, Davis.

It's quite timely and appropriate because of the beleaguered bees.

Lynn Kimsey, director of the Bohart Museum and professor and vice chair of the UC Davis Department of Entomology, has a keen interest in bees, and not just because she's an entomologist and a former beekeeper. She's instrumental in the administrative aspects of the Harry H. Laidlaw Jr. Honey Bee Reseach Facility, including the newly planted Häagen-Dazs Honey Bee Haven, a half-acre bee friendly garden. Plans call for a public open house June 19.

And if you ever want to check out the wide variety of bee specimens (from honey bees to carpenter bees to sweat bees to blue orchard bees, et al), be sure to visit the Bohart. Bees are among the seven million insect specimens housed there.

“Farmers rely heavily upon the managed colonies of the European honey bee (Apis mellifera) to pollinate crops. Not only do honey bees help produce our food but they also provide us honey and wax. Recently honey bee colonies have been dying off and their numbers are declining. Disease and mites may be the root of the problem, but insecticides and habitat loss also pose serious threats.”

Researchers at UC Davis, Kimsey explained, are trying to "understand and solve the problems of declining pollinators, both native and domesticated, by studying their taxonomy, ecology, life history traits, diseases and behaviors."

The Bohart Museum, located in 1124 Academic Surge, was founded in 1946 by the late Richard M. Bohart, former chair of the UC Davis Department of Entomology. Dedicated to teaching, research and service, the insect museum houses the seventh largest insect collection in North America.

More information about the Bohart, visiting hours, and guided tours is available from public outreach coordinator Tabatha Yang at (530) 752-0493 or tabyang@ucdavis.edu. 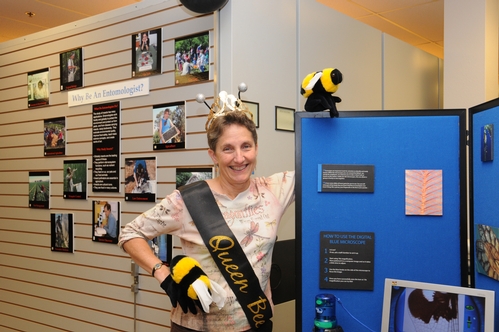 Queen Bee
QUEEN BEE at the Bohart Museum open house was Lynn Kimsey, director of the Bohart and professor and vice chair of the UC Davis Department of Entomology. (Photo by Kathy Keatley Garvey) 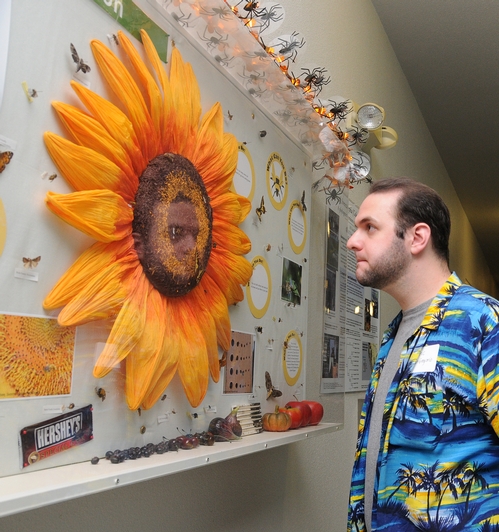