Santa Claus is coming to town. (Photo by Kathy Keatley Garvey)
So, hurry down the chimney, tonight!

So goes a line from "Santa Baby." The songwriters (J. Javits, P. Springer and T. Springer) listed all the good presents they wanted Santa to bring: a sable, a '54 convertible (light blue, please!), a yacht, a duplex and a deed to a platinum mine.

The late Eartha Kitt sang it well, emphasizing: So, hurry down the chimney, tonight!

Odds are that Santa will indeed hurry down the chimney if honey bee colonies occupy the roof. The growing popularity of urban beekeeping means not only more backyard beekeepers but more rooftop beekeepers.

Umm, be careful out there, Santa! You will need some protection: a veil, gloves and smoker. And are you sure you want to wear red? Bees dislike red. It's black to them and bees dislike black.  Intensely. Did I say intensely? intensely.

Another thing, Santa, please note that your reindeer will pause longer on the rooftop if they encounter bees, and this will adversely affect your global delivery schedule.

Up on the housetop, reindeer pause
Out jumps good old Santa Claus
Down through the chimney with lots of toys, all for the little one's Christmas joys.
--Up on the Housetop"

In fact, Santa, your reindeer may turn a "pause" into a "standoff" due to guard bees defending their colony. Aggressively. And they don't much like reindeer hooves (or anything else, for that matter) disturbing their hives.

And take Rudolph the Red-Nosed Reindeer. He's a perfect target and not just because of hooves flailing. It's that bright red nose. Bright. Red. Nose. Ouch!

Answer: Umm, Santa and his reindeer?

And remember Clement C. Moore's "The Night Before Christmas?"

When, what to my wondering eyes should appear,
but a miniature sleigh, and eight tiny reindeer,
with a little old driver, so lively and quick,
I knew in a moment it must be St. Nick.

The key words here are "so lively" and "quick." One sting, and you, Santa, will certainly be both lively and quick. Very. Lively. Very. Quick. Bee cluster. (Photo by Kathy Keatley Garvey)
Which brings to mind the rooftop beekeeping operation on the San Francisco Chronicle roof. When we visited the rooftop several years ago with Queen Turner, head of beekeeping in Botswana's Ministry of Agriculture,  we forgot to ask Chronicle reporter/beekeeper Meredith May about any adverse effects of the pending visit from the jolly ol' gent from the North Pole and his overladen sleigh pulled by eight  reindeer.

The Chronicle, as you may remember, launched rooftop beekeeping back in 2011 in an effort to help save the disappearing honey bees.  Beekeeper May writes "Honeybee Chronicles."

Santa does not read the "Honeybee Chronicles." He is too busy reading lists and questioning whether people are "naughty" or "nice."

These days, however, it is not just about being "naughty" or "nice."

Santa is bound to ask: "Pardon me, but do you keep bees on your roof? How many colonies? Are they European honey bees or Africanized bees? And are these bees accustomed to encountering a red-dressed, bearded fellow driving a not-so-miniature sleigh pulled by not-so-tiny reindeer and led by a reindeer with a big, fat red nose?" 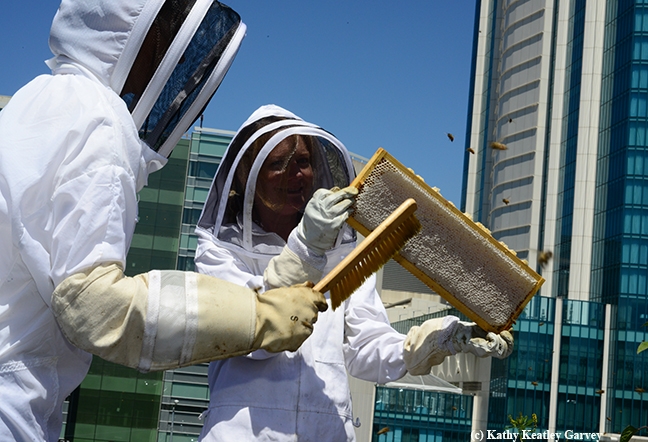 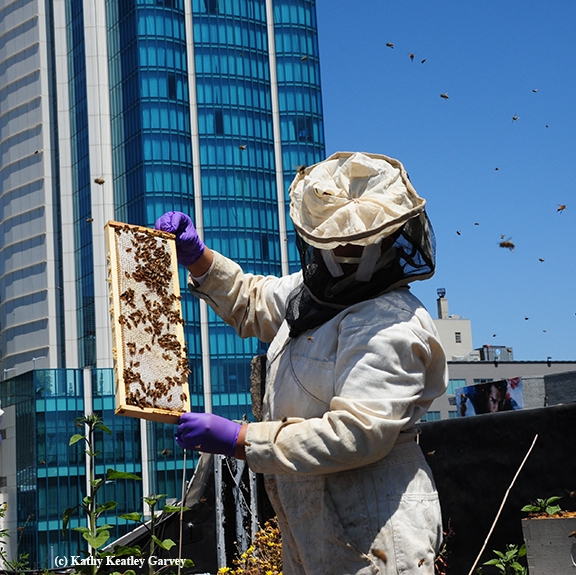 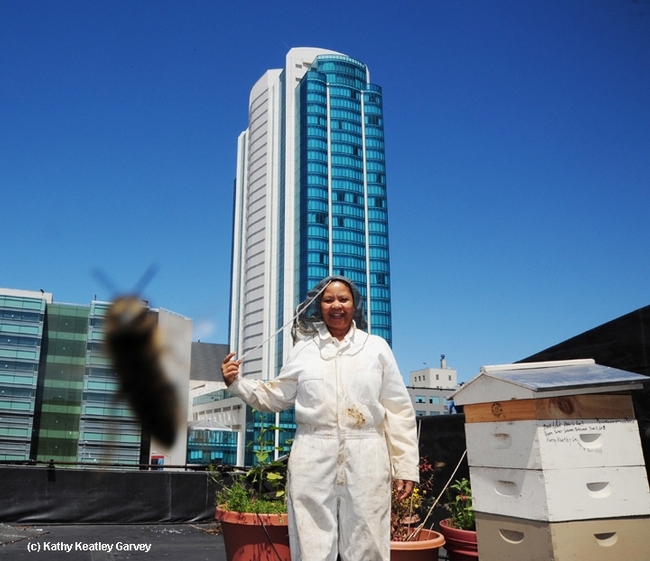 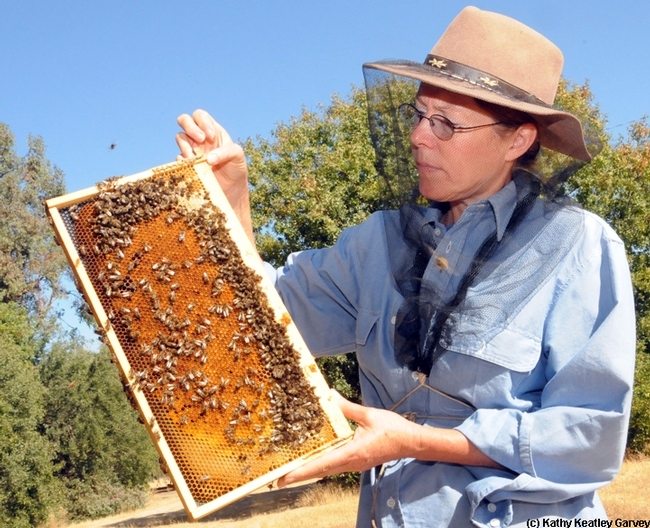 Beekeepers in Bolivia tending their hives. (Photo by Britta L. Hansen)
One is a renowned bee scientist based in Washington state.

One is a noted commercial queen bee breeder in California.

One is the head of the beekeeping section, Ministry of Agriculture, Botswana government.

And two are beekeepers in Bolivia.

They all have at least two things in common: (1) they are women who work with bees and (2) they form part of the UC Davis "Women Feeding the World: Farmers, Mothers and CEOs" online photo gallery.

And meet the two beekeepers in Bolivia through the eyes of former Peace Corps volunteer Britta L. Hansen, now a staff member with Horticulture Collaborative Research Support Program (Horticulture CRSP), one of the sponsors of the project.

How did this all come to "bee"?

Brenda Dawson, communicators coordinator for the Horticulture CRSP, says a number of campus and community organizations came together to sponsor the event and its gallery, including several units from the College of Agricultural and Environmental Sciences: the Blum Center, Horticulture Collaborative Research Support Program, International Programs Office, and Program in International and Community Nutrition. Additional sponsors include the World Food Center, Office of Campus Community Relations, Women's Resources and Research Center, and the off-campus organization Freedom from Hunger.

Of the approximately 80 photos submitted by faculty, staff, students, alumni and community members, 12 were selected for display on the first floor of the Coffee House, UC Davis Memorial Union. One depicts Cobey holding a frame of bees at the Harry H. Laidlaw Jr. Honey Bee Research Facility, UC Davis.  Dawson said the display, which can be viewed until the end of the winter quarter, is part of this year's Campus Community Book Project focusing on "Half the Sky: Turning Oppression Into Opportunity for Women Worldwide," authored by the husband-wife team of Nicholas Kristof and Sheryl WuDunn.

"The photos depict women in a variety of roles related to food—including bean farmers, beekeepers and breastfeeding mothers—in California and around the world."

Susan Cobey. Bee breeder-geneticist Susan Cobey, former manager of the Harry H. Laidlaw Jr. Honey Bee Research Facility at UC Davis, is internationally renowned for her expertise on queen bee-rearing and for her classes on instrumental queen bee insemination. Honey bees are her passion. She studied with Harry H. Laidlaw Jr. at UC Davis. Cobey is now a bee breeder-geneticist at Washington State University but stays involved with California queen bee breeders, the Almond Board of California, and the California State Beekeepers' Association. One third of the American diet is pollinated by bees. Without bees, we'd be reduced to eating grains like wheat (wind-pollinated).

Queen Turner. Queen Turner is head of the beekeeping section, Ministry of Agriculture, Botswana government. As a Humphrey fellow, Queen Turner completed a 10-month stay in the United States, which included studies at UC Davis. She attended many classes and seminars last year and presented a lecture on "Beekeeping in Botswana" to the UC Davis Department of Entomology and Nematology. One of her activities was inspecting the beekeeping operation on the rooftop of the San Francisco Chronicle. After completing her Humphrey fellowship, she returned to Botswana last June.  The word for bee in her native language, Setswana, is "notshi."

Bolivian Beekeepers. Former Peace Corps volunteer Britta L. Hansen, now with the UC Davis Horticulture CRSP, worked with a group of female beekeepers in Bolivia and captured this photo of two beekeepers in 2008. "We received funding to help the women purchase Langstroth style hives that were made in Bolivia," Hansen related. "Sara was the secretary of the group, and she and I drove into the regional capital to pick up the hives and transport them back to our community of Paredones."

Be sure to check out the online photo gallery and the display at the Memorial Union of "Women Feeding the World." Great project! 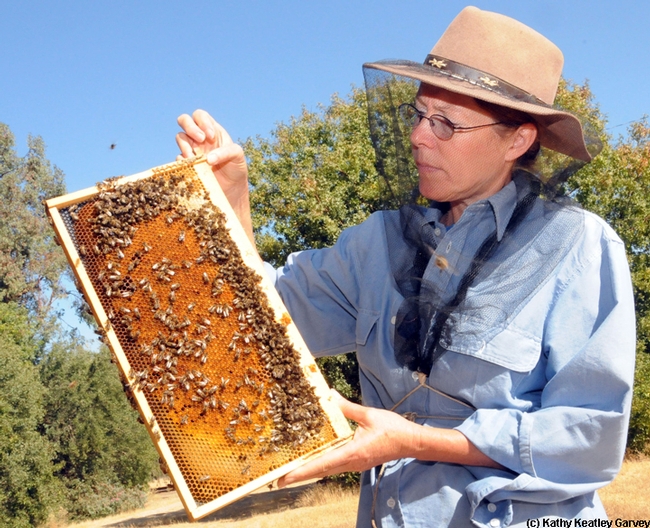 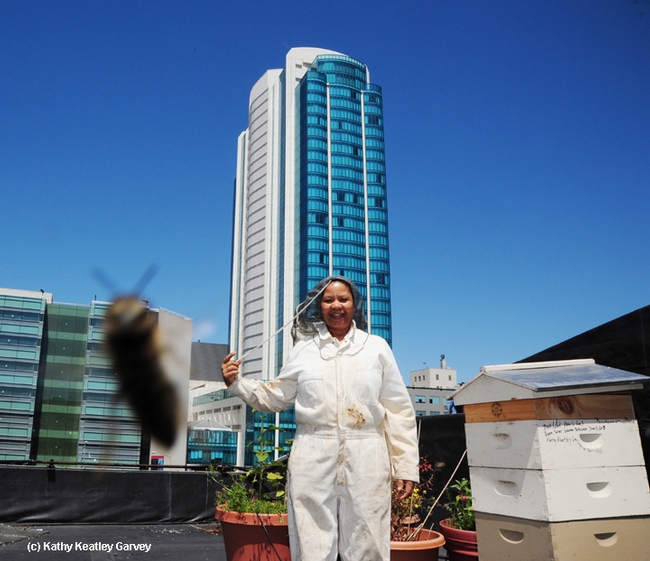 Journalist/beekeeper Deb Wandell (left) of the San Francisco Chronicle smokes a hive on the rooftop. With her is Queen Turner, head of the beekeeping Section, Ministry of Agriculture, Botswana. (Photo by Kathy Keatley Garvey)
Up on the rooftop
Reindeer pause,
Out jumps good ol' Santa Claus...

With all the rooftop beekeeping underway throughout the world, Santa may have some serious issues to consider tonight.

What if Rudolph the Red-Nosed Reindeer trips over a bee hive on a rooftop? Honey bees are rather grumpy this time of year, you know.  The queen bee, clustered inside the warmth of the hive, surrounded by worker bees, is not likely to issue a royal pardon. Guard bees will buzz out to defend their hive.

And they won't be just "pollen" Santa's leg.

Before jolly ol' Saint Nicholas can say "On Dasher, on Dancer, on Prancer, on Vixen, on Comet, on Cupid, on Donner, and on Blitzen," the Big Guy in the Red Suit (not an appropriate color for beekeepers) isn't feeling so good. Neither are the eight reindeer and the Red-Nosed One (now the Red-Nosed-Bulbous-One-That-Got-Stung-by-a-Bee.)

Indeed, this may prompt scientists to issue a white paper on "Santa Claus and the Pitfalls of Rooftop Beekeeping."

So, Santa, it might be a good idea to leave the red outfit at the North Pole tonight and don a professional bee suit with a zippered domed hood and leather gloves.

Might also be a good idea, too, to tuck a smoker in your sleigh. 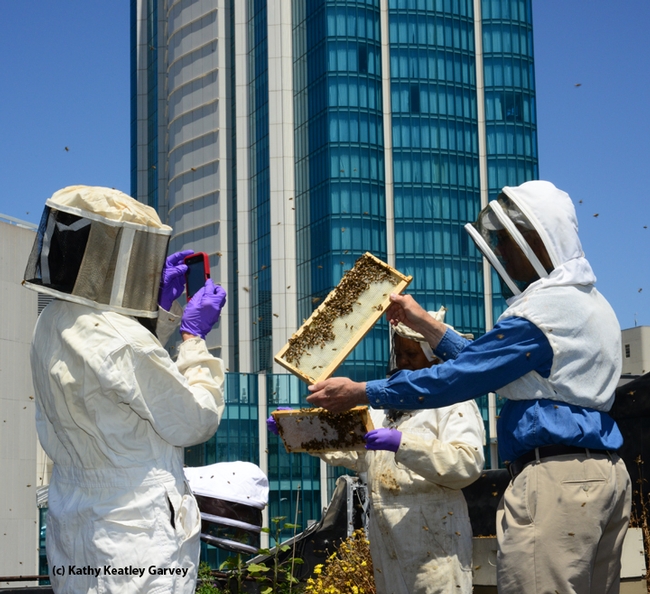 The San Francisco Chronicle engages in rooftop beekeeping and maintains two colonies and a fruit and vegetable garden. Journalists Deb Wandell and Meredith May are the beekeepers. Extension apiculturist Eric Mussen of the UC Davis Department of Entomology and Nematology and Queen Turner, head of the beekeeping Section, Ministry of Agriculture, Botswana, inspected the hives last June. From left are Turner, Wandell and Mussen. (Photo by Kathy Keatley Garvey) 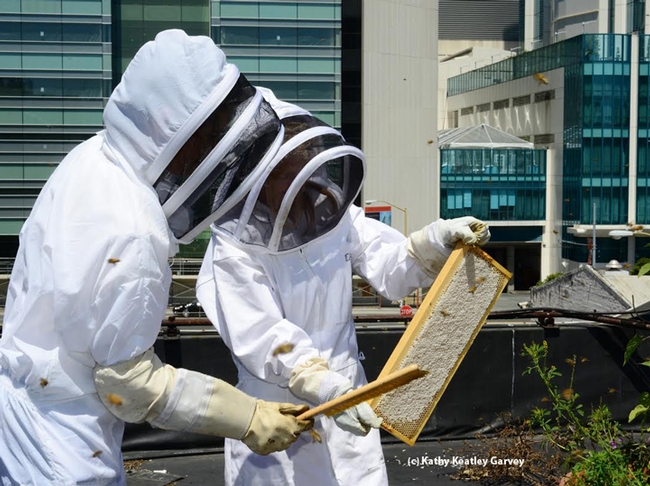