What an amazing photo!

One look at this photo and you will marvel at some v-e-r-y hungry caterpillars. Ravenous, in fact!

Lynn Kimsey, director of the Bohart Museum of Entomology, UC Davis, and professor of entomology, identified the caterpillars as Schizura concinna.  "We always have people finding them outside Academic Surge (Crocker Lane, UC Davis campus) where they're feeding on the redbud and a variety of other things," she said.

Professor Wagner described the image as "stunning given that these are first or second instars. Keep them coming—I am working on a guide to western caterpillars and need people in your part of California (desperately)." So if you see any redhumped caterpillars, he'd love to see them, too.  (Email him at david.wagner@uconn.edu)

"The redhumped caterpillar, Schizura concinna, is found throughout much of California," the UC IPM authors wrote. "Although the climate of the coastal regions usually doesn't favor development of destructive populations, it can be a serious problem in the warm Central Valley. This pest most commonly attacks liquidambar (sweet gum), walnut, and plum trees, but you also can find them on almond, apple, apricot, birch, cherry, cottonwood, pear, prune, redbud, willow, and others, especially where insecticides applied to control other pests have killed their natural enemies.

"The redhumped caterpillar has four stages of development—egg, larva (caterpillar), pupa, and adult (moth)," they pointed out. "Adults lay eggs, which are nearly spherical and pearly white to cream colored, in groups of 25 to 100 on the undersides of younger leaves.

"Caterpillars are 1 to 1-1/2 inches long when fully grown and have a base color of yellow. Longitudinal white, reddish brown, or sometimes black stripes mark the body. The head is usually orange or brick red, as is the fourth body segment, which is distinctly humped and has two prominent, black tubercles (spines). Each body segment also has less distinctive black tubercles. Caterpillars rest with their hind end elevated."

You can read more about redhumped caterpillars on the UC IPM site--and how to control them.

Back in 2010, we spotted several redhumped caterpillars eating the leaves of our newly planted redbud tree. We let them eat their fill. However, they weren't nearly as abundant--or ravenous!--as the caterpillars on Cindy Carmouche's French prune! 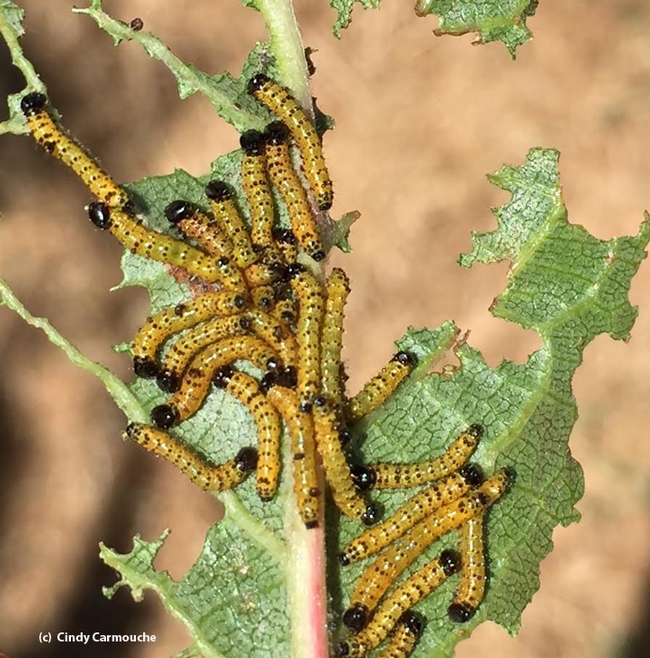 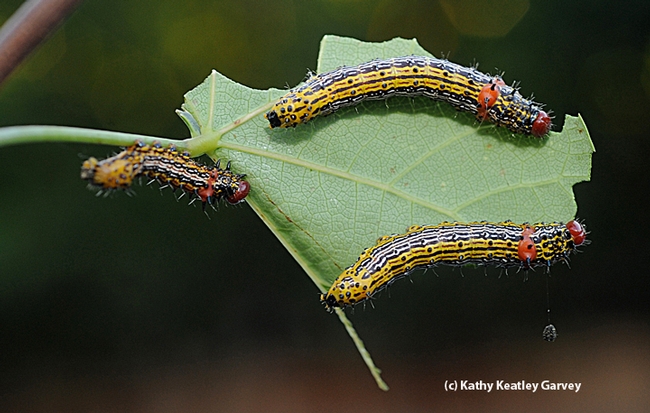 Once upon a time, there was a redhumped caterpillar gorging on the leaves of a redbud tree.

For three days, the hungry caterpillar gobbled the leaves, like an insect version of Pac-Man. It snipped, shredded and skeletonized the leaves and then went for more.

On the fourth day, it lay motionless, entangled in a spider web.

On the fifth day, the lifeless redhumped caterpillar (Schizura concinna) came back to "life," in the form of Argentine ants gorging on its carcass.

Life and death in the garden... 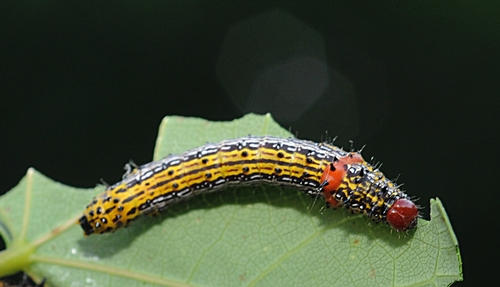 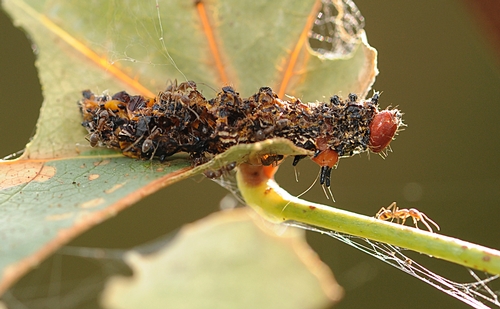 There's a whole lot of crunchin' going on.

The redhumped caterpillar has discovered our redbud tree, which it considers an "all-you-can" buffet.

Now this is a voracious eater on the same scale of a fellow named Joey "Jaws" Chestnut.

Distinguished by a bright red head and an equally bright red hump behind its head (Joey has neither, by the way), the caterpillar is yellow with red and white stripes. It's about an inch and a half long and can defoliate or skeletonize a leaf faster than you can say "The redhumped caterpillar is a Schizura concinna in the family Notodontidae." (Or “Joey Chestnut ate 54 dogs and buns on July 4, 2010 and took home the Mustard Belt.”)

The redhumped caterpillar is quite fond of redbud leaves but it also takes a liking to liquidambar, walnut and plum leaves, to mention a few.

Noted butterfly expert Arthur Shapiro, professor of evolution and ecology at UC Davis and the person behind "Art's Butterfly World," took one look at my trio of happy campers...er...caterpillars and commented:

Shapiro says it also "attacks walnut and a variety of other chemically distinctive trees that other things don't eat, as a rule. The damage is minor, and I strongly advise against spraying; hand-picking can be used if control is deemed necessary, but they feed so late in the season that there is no actual harm to the tree."

No, no harm. Just some skeletonized leaves and leaf stubs.

"The moth is very nondescript," he says. "It holds its wings wrapped around the body cylindrically and looks remarkably like a cigarette butt, though it is probably 'imitating' a broken-off twig. Despite authoritative commentary to the contrary, they have two broods a year here but are usually seen in fall. The species is native on both coasts and oddly absent in most of the mid-continent."

It will be awhile before we see the adults, which are grayish-brownish.

Shapiro says the insects "pupate in litter or slightly below the soil surface and won't hatch until June or so, if true to form."

Meanwhile, it's OTL, followed by OTD and OTB (out-to-lunch, dinner and breakfast).

It's already won the Redbud Belt. 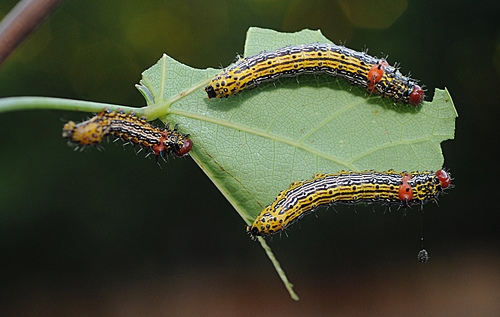 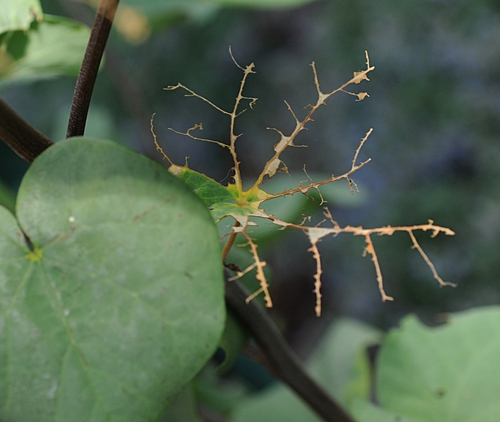