It’s triple-digit hot and you’re relaxing in a swimming pool when suddenly you realize you have company.

In this case (see photo below), it's a female cuckoo sweat bee from the genus Sphecodes, according to native pollinator specialist Robbin Thorp, emeritus professor of entomology at UC Davis.

Sweat bees are attracted to perspiring skin and often drop into swimming pools where they greet you with a brief but sharp sting.

Sphecodes are cuckoo or parasitic bees. They don’t collect pollen or provide for their young because they don’t need to. They lay their eggs in the nests of other bees. When the larvae hatch, they turn villainous and eat the young of the host bee. They also steal the provisions.

These bees, from the family Halictidae, are really tiny, about 0.2 to 0.6 inches. You’ll see them from late spring until early fall

It’s a large genus, with about 80 known species in the United States and Canada, says entomologist Mace Vaughan of the Xerces Society.

In most species, females are dark red with a shiny abdomen, Vaughan says, while males have a partially or entirely black abdomen.

You'll see red for just a little while. 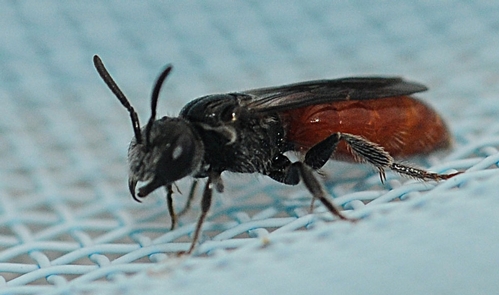