These triple-digit temperatures make us all thirst for water.

If you see them taking a sip from your birdbath or taking a dip in your pool, the "sip" means they're collecting water for their hive, and the "dip" could mean they're dying, says retired Extension apiculturist Eric Mussen of the UC Davis Department of Entomology and Nematology.

"Like most other animals, the bodies of honey bees are mostly water," he points out. "Thus, they need to drink water routinely as we do.  Additionally, water (or sometimes nectar) is critical for diluting the gelatinous food secreted from the head glands of nurse bees, so that the queen, developing larvae, drones, and worker bees can swallow the food.  They use water to keep the brood nest area at the proper relative humidity, especially when it gets hot and dry outside the hive.  Water droplets, placed within the brood nest area, are evaporated by fanning worker bees and that cools (air conditions) the brood nest area to keep the eggs and developing brood at the critical 94 degrees Fahrenheit required for proper development."

On extremely dry, hot days, all bee foraging except for water will cease, Mussen says. "Under those conditions it has been estimated that the bees may be bringing back nearly a gallon of water a day."

Unlike us, honey bees cannot simply turn on a faucet. "They will fly up to nearly five miles to find a suitable watering source," Mussen says. "Suitable to honey bees might not be suitable to us, but if it is moist, it may be visited.  Suitable to the neighbors is a separate question.  Honey bees can become quite a nuisance if they visit drippy irrigation lines or hose connections, birdbaths, pet water dishes, swimming pools, fountains, or wet laundry and the like. The water foragers become habituated to those sites.  If you try to dissuade the bees by drying up the source for a while, it becomes evident that the bees will visit the site every so often so they'll be around quickly after the water is returned."What to do? "People have tried to use repellents in the water, but the bees are likely to use the odor as an attractant when attempting to relocate the water source," Mussen points out.  "Some people have had success keeping bees and wasps out of their swimming pools with very lightweight oils or monomolecular films--their purpose is to prevent mosquitoes from being able to breathe.  But, if the water is splashed very much, you'll require a new layer."

And all those bees struggling in your swimming pool? "Not all moribund honey bees in a swimming pool are there because they were trying to get a drink. Every day, approximately 1,000 old honey bees from each colony die naturally.  This normally occurs during foraging, and the bees just flutter down to the ground, sidewalk, driveway, parking lot, or whatever they were passing over.  Some flutter into swimming pools.  They are not dead, yet, so they can and do inflict stings on people who bump into them on the surface of the water. "

Beekeepers should make sure there's a watering source on their property so the bees won't hunt for water elsewhere, Musssen says. It should be available all year around. "Once the bees are habituated to the site, most of them will use that source."

One good thing to know: Bees don't like to get their feet wet. In the Garvey birdbath, we have floating wine corks just for the bees. They can land on a cork to sip water or simply sip from the edge of the birdbath. Besides wine corks, you can also use a stone, a twig or a flat chunk of cork. The Melissa Garden, a privately owned garden in Healdsburg that was designed by internationally distinguished bee garden designer Kate Frey of Hopland, includes a flat floating cork in a fountain. On any given day, you'll see bees claiming it as their own.

Honey bees find water where they can. (Photo by Kathy Keatley Garvey) 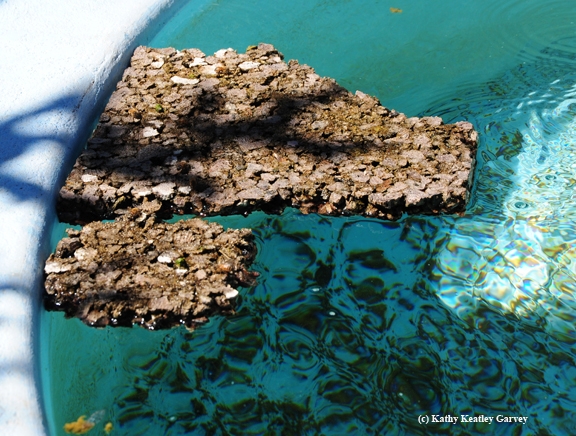