We've all heard of the cuckoo clock.

And most of us have heard of the  cuckoo bird (Cuculus canorus), which lays its eggs in the nest of birds of other species.

But the cuckoo bee?

Yes, there is a cuckoo bee. The female lays her eggs in the nests of other solitary nesting bees.

They resemble wasps.  You can see these slender-waisted bees hovering low to the ground, sneakily searching for burrows of other solitary nesting bees.

Like an identity thief, they try to avoid detection. They slip into a  a burrow and lay their eggs in the host's nest.  The hatched larvae then eat the host's food and parasitize (kill and eat) the host's larvae.

Some cuckoo bees are more abrupt and don't smuggle their eggs into a nest.  In Insects  of the World, Walter Linsenmaier writes how a few species of Sphecodes, invade the nests of mining bees (Halictus), and "with naked force when necessary" slaughter "everything that opposes them."

Then the cuckoo bee flings the opposition out the entrance. Did anybody say "cruel world?"

Cuckoo bees are not nice and they're not ready to make nice. If this is a world of The Givers and The Takers, then they're the takers.

I captured this image of a cuckoo bee last week. Said Robbin Thorp, emeritus professor of entomology at UC Davis:  "It's a cuckoo bee, probably the genus Triepeolus (maybe Epeolus) and probably a male." 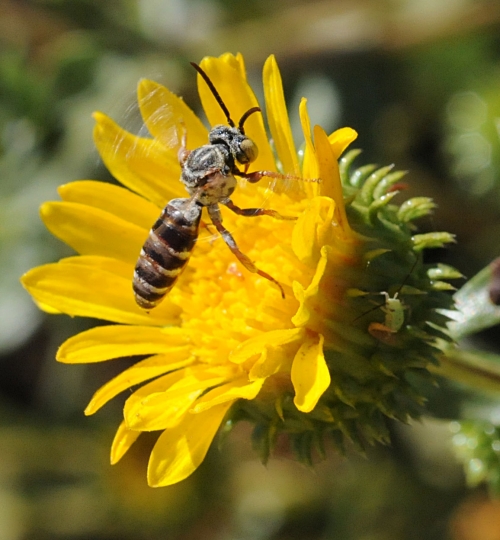