Thanks to the generosity of his family, his work is continuing through memorial research grants to outstanding graduate students at the University of California, Davis.

He was an ardent supporter of the judicious use of public health pesticides to protect public health, remembers Bruce Eldridge, emeritus professor of entomology at UC Davis and former director of the (now folded) statewide UC Mosquito Research Program. Eldridge eulogized him at the 2005 annual meeting of the American Mosquito Control Association (AMCA) as "a man who made a difference." The AMCA journal published his eulogy in its 2006 edition.  (See http://entomology.ucdavis.edu/files/154217.pdf)

"Bill was a medical entomologist who had a varied career in the field of mosquito biology and control, but he will forever be remembered as a man who fought in the trenches of the pesticide controversy from 1960 until the end of his life, and who made the safe and efficient use of pesticides in public health a personal crusade," Eldridge said.

In his memory, his three sons--Craig Hazeltine of Scottsdale, Ariz., Lee Hazeltine of Lincoln, formerly of Woodland, and the late Jeff Hazeltine (1958-2013)—established the UC Davis Bill Hazeltine Graduate Student Research Awards in 1997. Each year they travel to Davis to honor the recipients at a luncheon, timed with their attendance at a scholarship and fellowship celebration, hosted by Dean Helene Dillard, UC Davis College of Agricultural and Environmental Science.

Winokur is also the newly announced 2018 recipient of $3,094 to investigate Aedes aegypti immune response to Zika virus.  (Portilla expects to receive her doctorate in six to 12 months.) This is the yellow fever mosquito, Aedes aegypti, that UC Davis doctoral student Olivia Winokur studies. (CDC Photo)
Olivia Winokur received her bachelor's degree in 2015 from Cornell University, majoring in Interdisciplinary Studies and focusing on the environmental effects on human health. She enrolled in the UC Davis graduate program in 2016 as a Ph.D entomology student with a designated emphasis in the biology of vector-borne diseases. Earlier this year, Winokur received a three-year National Science Foundation Graduate Research Fellowship.

“Aedes aegypti and Aedes albopictus are mosquitoes capable of transmitting dengue, chikungunya, yellow fever, and Zika viruses,” Olivia Winokur explained in her 2017 application. “These species are invasive and present in California and continue to spread, increasing the likelihood of local transmission of these devastating viruses. Additionally, Aedes notoscriptus, an Australian mosquito whose vector competence for many viruses is unknown, has been detected in Los Angeles and is likely to spread in the state.  Aedesmosquitoes are readily detected using ovitraps, a cheap and effective sampling method to detect the presence of gravid females. Ovitraps are especially useful when mosquito populations are low as traps for adult Aedes are unreliable. Once collected, the eggs cannot be differentiated using a stereomicroscope. Traditionally, identifying Aedes eggs collected in ovitraps requires hatching and rearing to adult for visual identification, which is time consuming and leads to a time lag for control, potentially allowing invasive species to spread without intervention.”

“Currently, I am developing a non-destructive, low-cost method to rapidly identify Aedes eggs,” Winokur wrote. “I have shown that species-specific surface morphologies of the exochorion can be used to differentiate species using electron microscopy. This method is expensive and therefore not a realistic surveillance technique. We can, however, exploit these species-specific surface morphologies in another way to identify Aedeseggs. Slight changes in morphological characteristics can be captured with high spatial resolution proximal sensing imaging, termed hyperspectral imaging.”

Winokur is testing “the use of  hyperspectral imaging to differentiate between eggs collected from lab colonies of native and invasive Aedes mosquitoes in California. Preliminary data indicate this method shows promise for identifying species and warrants further testing.  Once I have created species-specific reflectance profiles and validated my identification method using colony eggs, I will collect field eggs and validate the identification method using these field eggs.” She is working with  hyperspectral imaging expert Christian Nansen, agricultural entomologist and assistant professor, UC Davis Department of Entomology and Nematology, on the project.

Winokur describes hyperspectral imaging as “a powerful tool that recognizes slight changes; therefore, we need to ensure that all samples are collected and conditioned the same way before testing. Samples must be imaged directly on the oviposition paper because exochorion cells are damaged by the ‘glue' the female uses to attach her eggs to the substrate; imaging removed eggs leads to inconsistent reflectance profiles. This method for rapidly identifying Aedes eggs will allow for quick response to the detection of invasive Aedes mosquitoes.”

After finishing her Ph.D., Winokur plans to remain in academia, but “I'm unsure exactly what that will look like! I really enjoy research, teaching, and mentoring so I'd like to have a career where I can do all of these. I also plan to have a career where I can conduct translational research with broad global health implications, engage non-scientists, create tools to help decision makers mitigate vector-borne disease burden worldwide, and encourage interest and diversity in STEM (science, technology, engineering and mathematics).” This is the Culex mosquito that UC Davis doctoral candidate Maribel "Mimi" Portilla studies. (Photo by Kathy Keatley Garvey)
Mimi Portilla, who joined the UC Davis Entomology Graduate Program in the fall of 2012,  holds a master's degree in public health from UC Berkeley, where “I was able to study health and disease within a larger context, and learned to consider the biological and the social determinants of disease.” Her area of expertise incorporates her love for biology and her strong interest in social issues.

“At UC Berkeley School of Public Health, I was able to study health and disease within a larger context, and learned to consider the biological and the social determinants of disease. As I completed my degree, I realized I really missed the research experiences I had as an undergraduate. So, I looked for a way to bridge my new-found passion for public health and basic science research. This led me to UC Davis, where I learned about One Health and am now pursuing a Ph.D in medical entomology. Medical entomology is a perfect example of a One Health field, where I can seek out how interactions between humans and animals impact health. I am particularly interested in researching how disease risk may change as people manipulate the environment."

Her academic life revolves around writing her dissertation; teaching UC Davis classes (she's taught entomology, general biology and One Health classes); research; and public outreach. Since 2012, she has mentored some 30 undergraduate students on developing and executing their research experiments. She praised the “the diversity of my interns; they each brought such important and unique perspectives to the project.”

What are her career plans?

“Due to my diverse interests and skill set, I am very open about my career choices," Portilla said. "I have extensive teaching experience, and would love to be a professor with both teaching and research opportunities. However, there are many opportunities beyond academia. My research is introducing me to many other ways in which my work and research can help keep people safe and healthy. I hope to develop a strong research skill set while at UC Davis, and find a career path which takes advantage of my diverse abilities and love for One Health and Public Health."

Portilla mentioned pursuing a career as a teacher in a small liberal arts school to teach public health, general biology and global diseases classes, as well as do outreach and research. “I'm more of a scientist than an entomologist,” she said.

She may also pursue a career working in vector-control health education at the county, district or state level. “I'm open at this point,” Portilla said. Overall, she is geared toward improving public health outcomes through healthier environments. “I care about how outcomes affect the larger population,” she said.

Meanwhile, it's good to see that William Emery Hazeltine's passion for medical entomology lives on, and to see UC Davis graduate students benefit, all thanks to the generosity and thoughtfulness of the Hazeltine family. The "family" of 42 recipients since 1997 includes Christopher Barker, Winokur's major professor, who received a Hazeltine research award in 2006. 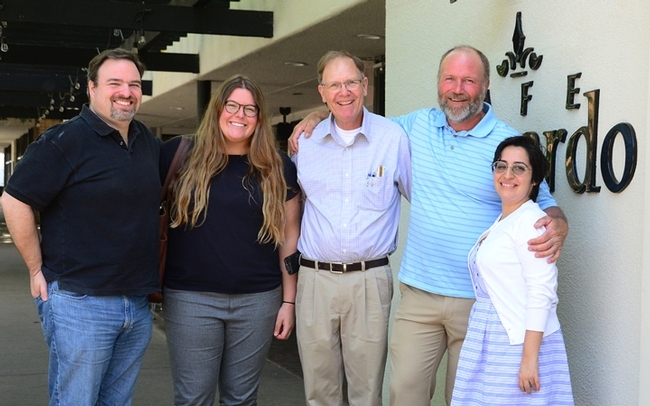