Bug Squad
sitenum=63
Happenings in the insect world
How to 'Bee My Valentine': Let's Help Out the UC Davis Biodiversity Museum Day What is the UC Davis Biodiversity Museum Day?

It's a free, open-to-the-public, science-based day that annually takes place the Saturday of Presidents' Day weekend and showcases nearly a dozen museums or collections.  It's an opportunity for campus visitors to see exhibits and displays at various points on campus and converse with the scientists.

This year is the 11th annual. However, due to COVID-19 pandemic restrictions and UC Davis policies, the 2022  Biodiversity Museum Day will be held at one site--the UC Davis Conference Center, 550 Alumni Lane--and will be from 11 a.m. to 3 p.m., Sunday, March 6. What's also different? It's geared for undergraduates and other members of the UC Davis community instead of the general public from surrounding counties. (The general public can look forward to the UC Davis Picnic Day on April 23, 2022 when many of the same museums and collections are scheduled to be featured.)

But back to "bee my valentine."

Honey bees are an integral to at least three of the museums/collections:

How can you help the bees as well as other fauna and the flora associated with UC Davis Biodiversity Museum Day?

A UC Davis Crowdfunding Project is underway until 11:59 p.m., Feb. 28. Contributions from $5 on up are welcome, said project managers Tabatha Yang, education and public outreach coordinator for the Bohart Museum of Entomology, and Rachel Davis, a GATEways horticulturist and museum scientist at the UC Davis Arboretum and Public Garden.

"Donations will not only help us sustain the free, in-person event, it will enable our student interns to take science outreach to a whole new level," they said. "The goal of our event is to connect people from all walks of life to science and the biodiversity surrounding them.  All donors will be recognized on the Biodiversity Museum Day social media accounts with a shout-out post."

Any amount is appreciated: $5 will get you into the Fantastic Yeasts category; $10, the Sprout (Valley Oaks) category; $25, the Bumble Bee category; and $50, the Jeweled Spider Fly category. Other categories include Atlati, California Condor, and Smilodon. The goal: $5000.

To donate, access https://bit.ly/3HPhSaA. You can be anonymous in name or contribution, or you can have your name listed on the donor wall in honor of someone, or in memory of someone.

Or you can just say "Bee my Valentine." 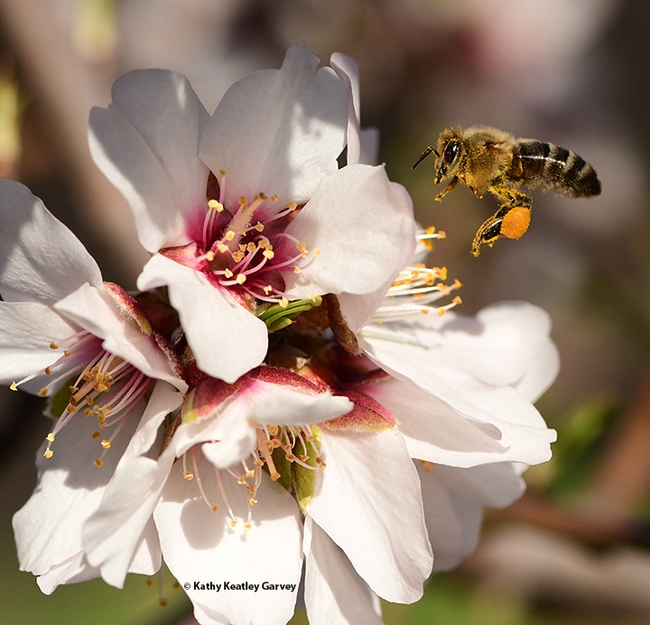 A honey bee, packing a load of orange pollen, heads for another almond blossom on Feb. 7, 2022 in Vacaville, Calif. Honey Bees are an integral part of the UC Davis Biodiversity Museum Day. (Photo by Kathy Keatley Garvey) 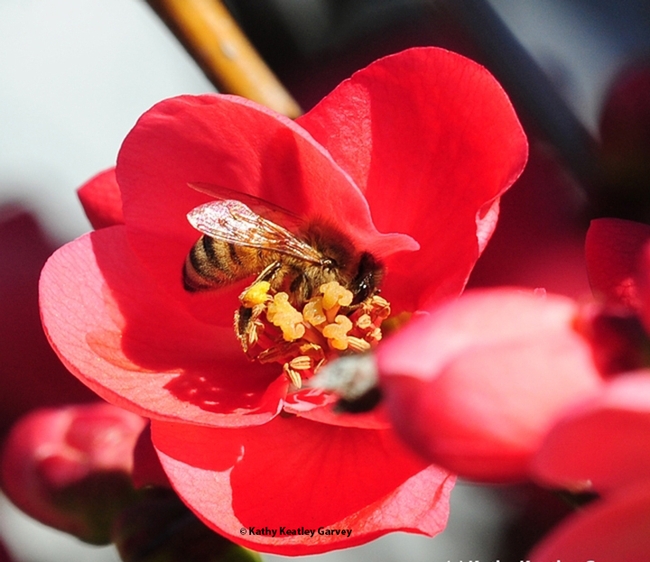 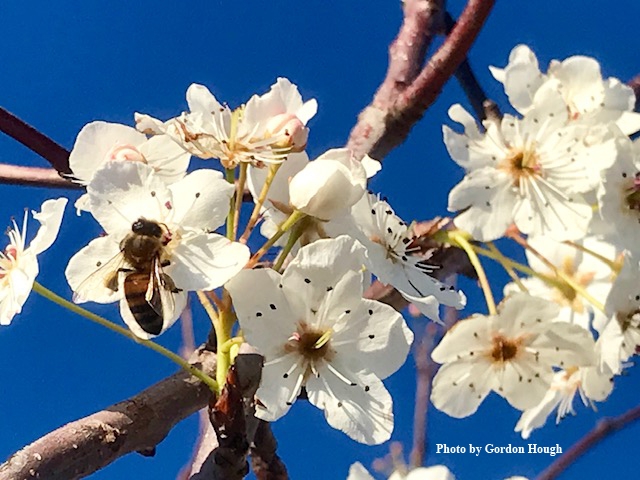 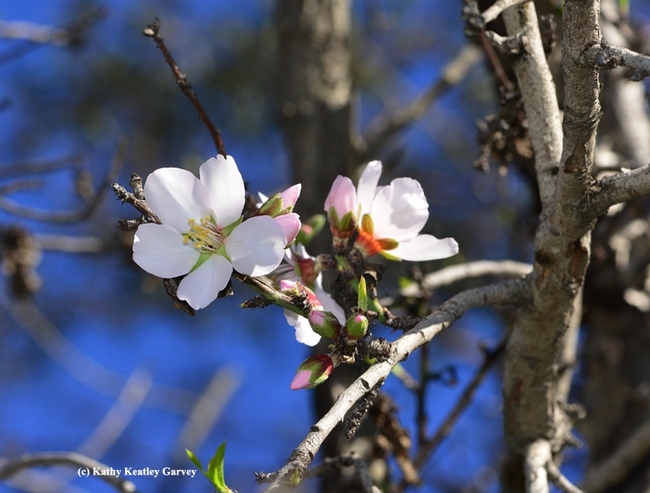 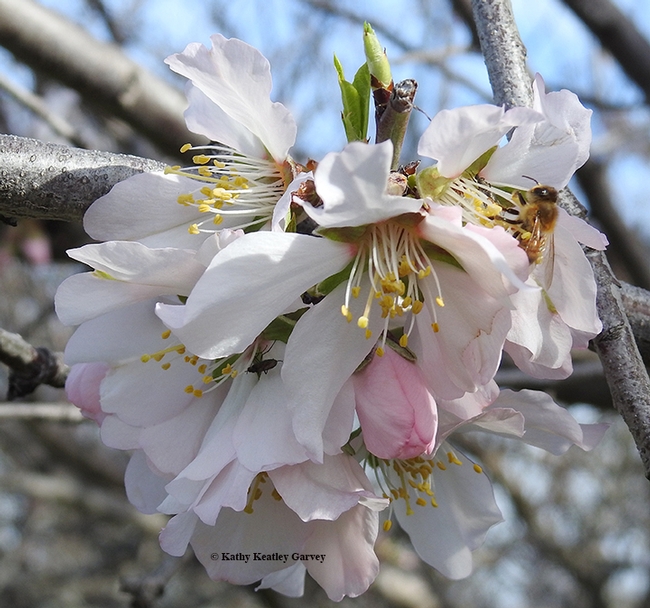 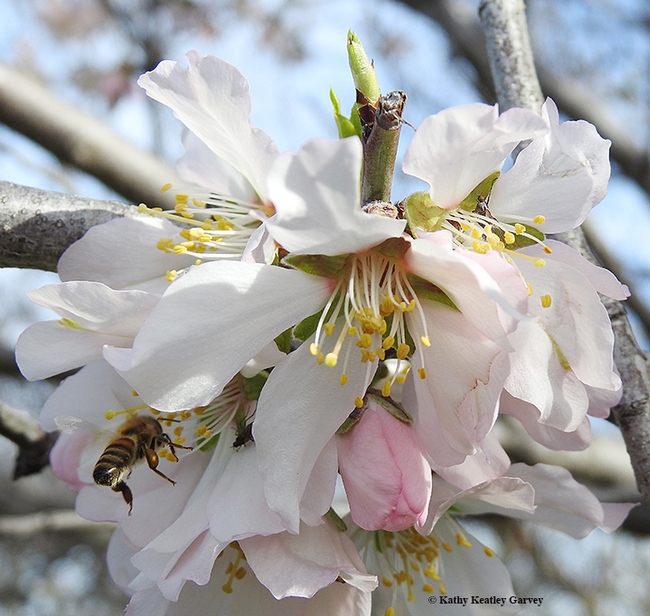 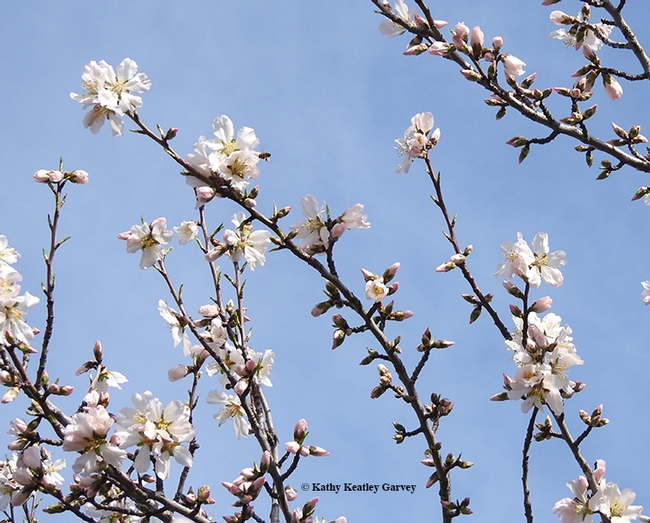 You're in luck. Two almond field days-- one set Thursday, March 10 in Lost Hills, Kern County, and the other on Tuesday, March 15 in Zamora, Yolo County--are scheduled and you're invited. They're free to all interested persons and no reservations are required, says coordinator Katharina Ullmann, crop pollination specialist for the Xerces Society for Invertebrate Conservation who holds a doctorate in entomology (Neal Williams lab) from UC Davis.

UC Davis pollination ecologists and other experts will be among those speaking.

For the March 10th event, titled “Almond Field Day: Integrated Crop Pollination,” participants will meet from 9 to 11 a.m. in an orchard east of Highway 33, about 5.8 miles north of the intersection between Highway 37 and Highway 36, Ullmann said. Signs will guide the way.

“This field day will provide an overview of integrated crop pollination for almonds,” Ullmann said. Topics will include almond pollination, minimizing risks to pollinators during bloom, and research updates on blue orchard bees and wildflower plantings for almond pollination in Kern County. The field day will include a tour of an orchard integrating honey bees, blue orchard bees, and wildflower plantings.

The speakers at the March 10th field day:

For the March 15th event, titled “Almond Pollination and Orchard Pollinator Planters,” all interested persons will gather from 9 a.m. to 11 a.m. at 8304 County Road 91B, Zamora.

“This field day will provide an overview of integrated crop pollination and on-farm wildflower plantings for almonds in the Sacramento Valley,” Ullmann said. “We will hear the latest research from a UC Davis lab studying almond pollination and wildflower plantings, learn about almond pollinators and how to support those pollinators using wildflowers. We will also discuss establishment and maintenance practices for planting habitat on field crop edges and provide an overview of plant species appropriate for plantings in the Sacramento Valley and beyond. Two growers will share their perspectives.

Continuing Education Credit (CEC) will be given. Participants at the almond field days are asked to bring a hat, sunscreen and good walking shoes. For more information contact Katharina Ullmann at katharina@xerces.org or at (530) 302-5504. 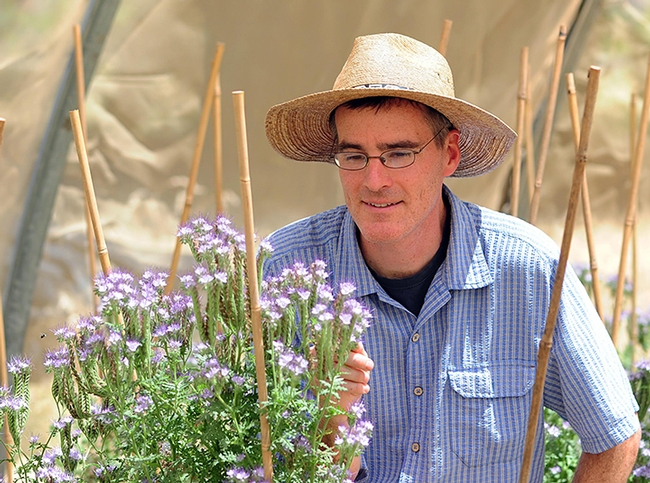 She's the beekeeper/graduate student at Harvard's Graduate School of Design who traveled through almond orchards in California's Sacramento and San Joaquin valleys in May 2014 to illustrate and pen a book about the spatial relationship between honey bees and almonds.

We wrote about her in a Feb. 11th Bug Squad blog.

The book, "Almond and the Bee," is now a reality. See http://blur.by/1CmYr3h. She's offering the book at cost ($9) and donating about $2 from the sale of each book to benefit the bees. The benefactor will be either the Xerces Society or Project Apis m.

Stephanie, a master of landscape architecture candidate who keeps bees on the rooftop of her school building, shared her marvelous 46-page digital story, http://almondandbee.com, with us earlier this year.

"I was inspired to create socially engaging and ecological performative places and hope to bring my passion for enhancing natural systems to the urban environment," she told us. "As a designer, I developed an interest in pollination during my second semester at the Harvard Graduate School of Design--I used the idea of pollination to attract people and pollinators to a park redesign, and developed a planting palette and a promenade that would do so."

Stephanie received a grant to finance her project.  She spent a week in "almond country," meeting with experts at UC Berkeley and UC Davis, the Almond Board, the Blue Diamond Cooperative, beekeepers, almond growers, and almond growers/beekeepers.

Pollination ecologist Neal Williams, associate professor, UC Davis Department of Entomology and Nematology, was among those who sat down with her and talked almonds and bees. He filled her on his research and offered tips on people to meet and places to see.

"The shape of the project developed during my fall 2014 semester," she related. "I thought an illustrated story would allow me to combine my photographs, maps, and drawings, with found historical images in an engaging and accessible form...The story is about how that came to be, but it's also an argument for holistic thinking in agriculture that could be both cultural and economically significant."

Two key sentences on the first page of http://almondandbee.com beckon the reader:  "The almond and the bee. The spatial relationship of the orchard, bee, and dwelling through time."

Almonds and bees need each other, she points out. California has more than 900,000 acres of almonds, and each acre requires two colonies for pollination.  And every year some 1.6 million colonies, or approximately 60 percent of the nation's colonies, are trucked to California.

"The relationship between almond growers and migratory beekeepers are in many ways analogous to that of the fruit tree and the bee—one is sedentary and one is mobile, but both depend on one another," Stephanie writes.

In her book, she traces the modern history of the honey bee, touches on traditional beekeeping methods, mentions the invention of the Langsroth hive in 1851, and takes a peek at the future of beekeeping and almond orchards. 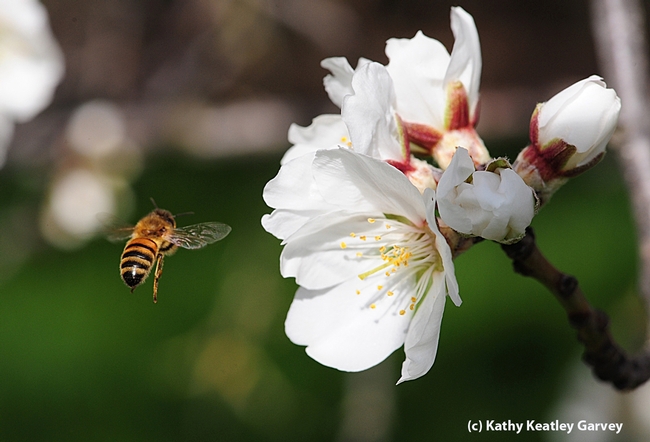