Published by Wicwas Press of Kalamazoo, Mich., it doubles as a university textbook and a "how-to" resource for beekeepers. It's also a great book for those interested in learning more about honey bees and their biology and behavior.

We first met Caron and Connor at a Western Apicultural Society meeting in 2009 in Healdburg, Calif. Caron holds a Ph.D. from Cornell University, and Connor received his doctorate in entomology from Michigan State University. At the time Caron was a professor/Extension entomologist with the University of Delaware. He is now retired and living in Oregon.

Connor's credentials include Extension entomologist at The Ohio State University, president of Genetic Systems, Inc. in Labelle Fla., a bee breeding firm; and owner/operator of Beekeeping Education Service and Wicwas Press. A prolific author, he's published many books and articles.

Both are on the "bee speakers' circuit," so to speak. They know bees!

Yes, the book touches on bee stings. (As an aside, isn't it a shame that when many people think of "honey bees," they think first of "stings," rather than pollination,  bee products and amazing superorganism? For beekeepers, stings just come with the territory.)

"Beekeepers often become complacent about bee stings; they are a normal occurrence of keeping bee colonies," Caron/Connor write. "With an increase in the number of stings, beekeepers become less reactive to the stings. They are a fact of life; something to tolerate as a beekeeper." This photo of a bee sting, with its abdominal tissue trailing, is published in the Caron/Connor book. (Photo by Kathy Keatley Garvey)
What to do when a bee stings you? As Extension apiculturist Eric Mussen of the UC Davis Department of Entomology and Nematology, tells his audiences--take your fingernail and scrape off the sting immediately. If you don't, the venom will keep pumping. The sting is like a barbed hook. It's a good idea to smoke the site to mask the smell, as the banana-like scent of the sting pheromone will alert the bee's sisters, and they, too, will spring into (sting) action.

Caron/Conner not only recommend that you grab the smoker and puff smoke on the sting site but  "Withdraw from the open colony and rub or wash the site with water to remove the chemical odor."

How to relive the pain? Personally, I use a meat tenderizer. Write Caron/Connor: "Apply an over-the counter sting relief remedy or a cool compress, ice, mud, or meat tenderizer to provide some relief."

The bee sting photo (taken by yours truly and published in the Caron/Conner book) shows a Carniolan bee owned by bee breeder-geneticist Susan Cobey, stinging Eric Mussen. What you see is the bee's abdominal tissue as it tries to pull away. At the time, we were walking through the apiary at the Harry H. Laidlaw Jr. Honey Bee Research Facility at UC Davis, and the bee became defensive.  "Kathy, get your camera, ready," Mussen said. "The bee's going to sting me."

Usually a bee sting is a clean break.

Speaking of breaks, bee scientists and beekeepers are gearing up for the next Western Apicultural Society meeting, to be held Oct. 16-19 in Santa Fe, N.M.

Mussen, a founder and five-time president of the organization, says the organization was "designed specifically to meet the educational needs of beekeepers from the states of Alaska, Arizona, California, Colorado, Hawaii, Idaho, Montana, Nevada, New Mexico, Oregon, Utah, Washington, and Wyoming; the provinces of Alberta, British Columbia, Saskatchewan, and the Yukon; and the states of northern Mexico."

Membership, however, is open to all interested persons--beekeepers and non-beekeepers alike. 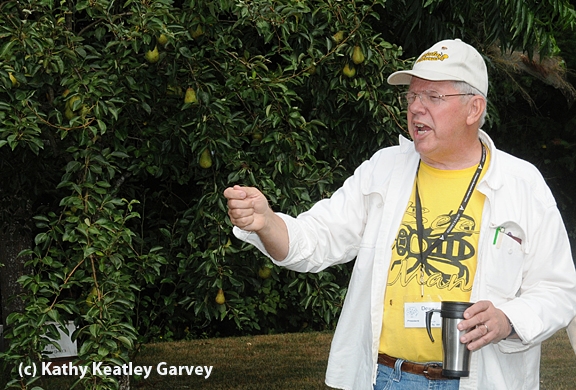