A praying mantis, Mantis religiosa, peers at the camera. (Photo by Kathy Keatley Garvey)
You never know where a praying mantis will deposit its egg case, the ootheca.

In and around Vacaville, we've seen them on olive trees, honeysuckle vines, passionflower vines, and wooden stakes. On the UC Davis campus, we've seen them on a 10-foot-tall Mexican grass tree (Dasylirion longissimum) in the Storer Garden, UC Davis Arboretum and Public Garden.

Then last week we spotted an ootheca on our decades-old weathered barn birdhouse.

It appears that a predator, probably a bird, ravaged it, though.

But those oothecas are tough.

As Wikpedia tells us: "Oothecae are made up of structural proteins and tanning agents that cause the protein to harden around the eggs, providing protection and stability. The production of ootheca convergently evolved across numerous insect species due to a selection for protection from parasites and other forms of predation, as the complex structure of the shell casing provides an evolutionary reproductive advantage (although the fitness and lifespan also depend on other factors such as the temperature of the incubating ootheca."

"The ootheca protects the eggs from microorganisms, parasitoids, predators, and weather; the ootheca maintains a stable water balance through variation in its surface, as it is porous in dry climates to protect against desiccation, and smooth in wet climates to protect against oversaturation," according to Wikipedia. "Its composition and appearance vary depending on species and environment."

We've always liked old barns. On our family farm, we spent many a glorious moment jumping around in the haymow before, after or during our chores. Fun times! Yes, we heard all the barn-related comments then and now:

Well, that praying mantis that graced us with the ootheca? Odds are that the offspring weren't born in a barn. Neither did they eclose. 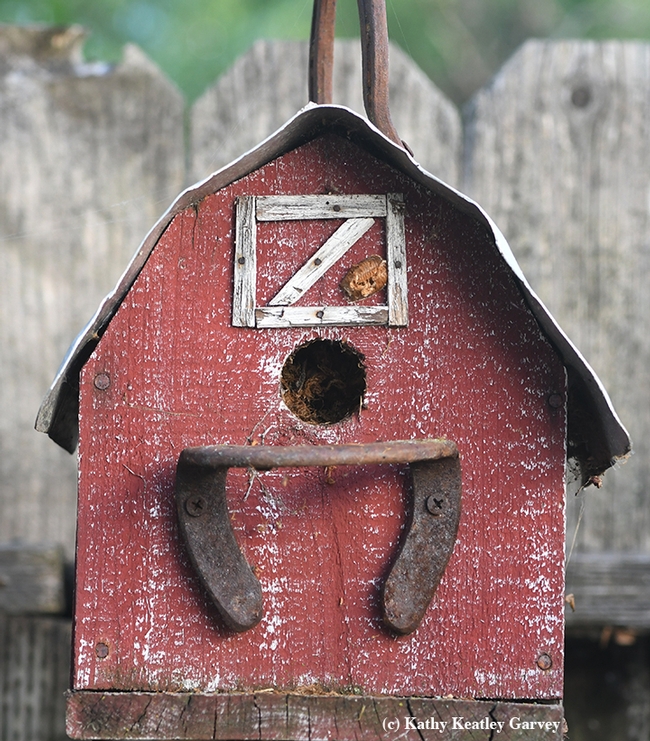 Find the ootheca! It's on this barn-themed birdhouse. (Photo by Kathy Keatley Garvey) 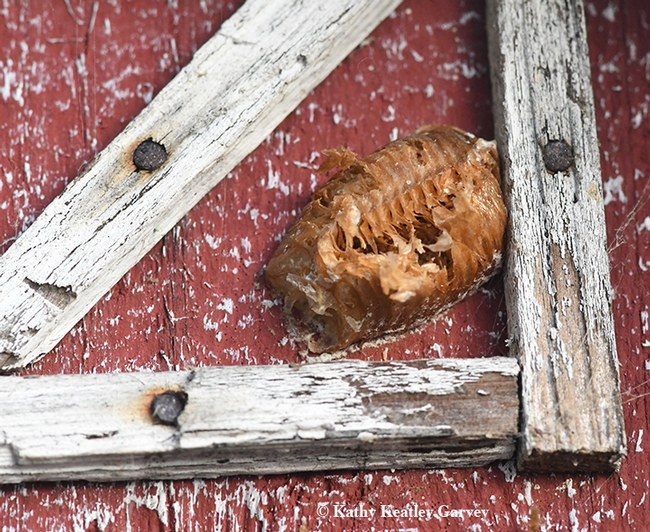 Some folks dislike photos of praying mantids snagging, killing and eating their prey. Well, often the "eating" part comes before the "killing" part.

Still, they have to kill to live. We all do.

Or someone does it for us.

We've been seeing lots of praying mantids in our bee garden, especially among the lavender (Lavandula), Mexican sunflowers (Tithonia) and passionflower vine (Passiflora). Most of them are lying in wait. Others, with spiked forelegs gripping their prey, are eating.

They have to kill to live.

We encountered this one (below) camouflaged in the lavender patch. Lynn Kimsey, director of the Bohart Museum of Entomology and professor of entomology at the University of California, Davis, thinks it may be a native species; it looks like some she's seen by the Yolo Causeway.

Praying mantids, of course, are insects and belong to the class Insecta, and the order Mantodea.

BugGuide.Net describes them as "Relatively large, elongate insects up to several inches long. Typical features include triangular heads with large compound eyes set on either side and usually three ocelli in between; very flexible articulation between the head and prothorax providing great mobility and allowing a mantid to 'look over its shoulder''; raptorial forelegs used to capture prey." California has some 20 species in 12 genera.

The word, mantis, is Greek for "soothsayer, prophet." (Maybe it should be "sure slayer.")

And yes, they can be highly cannibalistic. When they emerge from an ootheca or egg case, they show their brotherly love and sisterly love by eating one another.

BugGuide.Net says that the larger mantids can prey on small birds, lizards, and amphibians. Indeed, they can. YouTube displays videos of mantids attacking and eating hummingbirds.

We spotted an ootheca last winter on our barnlike bird house. Birds don't inhabit it. It's easy to see why. 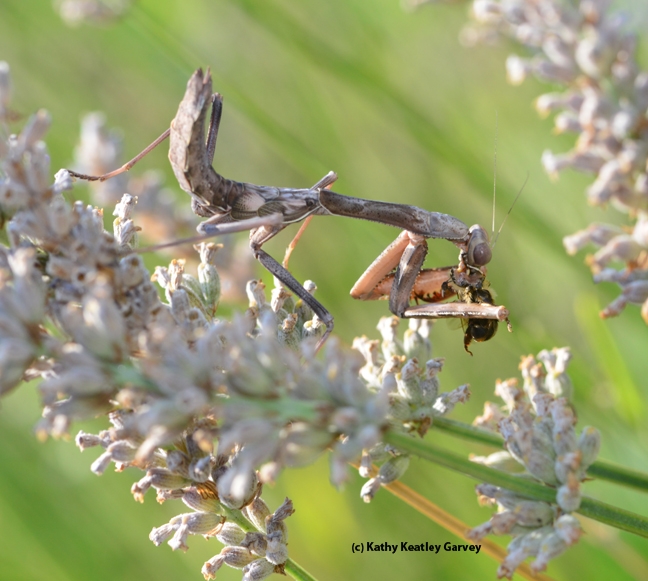 A camouflaged praying mantis dining on a bee. (Photo by Kathy Keatley Garvey) 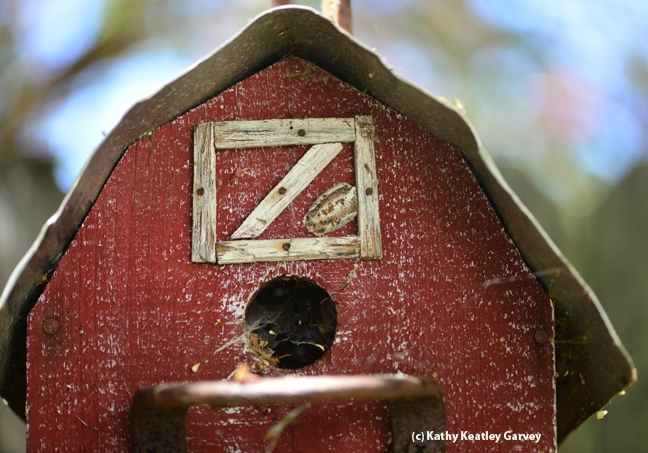