"Black Friday" means different things to each of us, but when I think of "Black Friday," I think of black bumble bees nectaring on blackberry blossoms in Berkeley.

Bumble bees on blackberry blossoms in Berkeley. Talk about alliteration!

Specifically, I think of the yellow-faced bumble bee, Bombus vosnesenskii, the bee I photographed on a Friday last spring in Berkeley.

Bombus vosnesenskii is among the bees featured in the University of California-authored book, California Bees and Blooms: A Guide for Gardeners and Naturalists, (Heyday Press). It's the work of entomologists Gordon Frankie of UC Berkeley and Robbin Thorp of UC Davis, entomologist/photographer Rollin Coville and plant scientist Barbara Ertter of UC Berkeley. Thorp, a UC Davis distinguished emeritus professor, also co-authoredBumble Bees of North America: An Identification Guide (Princeton University).

Bumble bees are in trouble. Many populations are declining, threatened or endangered. Take the case of critically endangered--or maybe extinct--Franklin's bumble bee (Bombus franklini), which has probably the most restricted or narrowest range of any bumble bee in the world, according to Thorp, who has been monitoring its population--or trying to--since the 1990s. Its habitat is--or was--a small area of southern Oregon (Douglas, Jackson and Josephine counties) and northern California (Siskiyou and Trinity counties). It frequents California poppies, lupines, vetch, wild roses, blackberries, clover, sweet peas, horsemint and mountain penny royal during its flight season, from mid-May through September.

In a UC Davis interview in July 2010, Thorp told us: “People often ask the value of Franklin's bumble bee. In terms of a direct contribution to the grand scale of human economies, perhaps not much, but no one has measured its contribution in those terms. However, in the grand scheme of our planet and its environmental values, I would say it is priceless."

"Loss of a species, especially a pollinator, diminishes our global environment,” Thorp said. “Bumble bees provide an important ecological service--pollination. This service is critical to reproduction of a huge diversity of plants that in turn provide shelter, food (seeds, fruits) to diverse wildlife. The potential cascade of effects from the removal of even one localized pollinator may affect us directly and indirectly.”

Many factors, including loss of habitat, are involved. Pesticides must share some of the blame. Interesting that researchers at Worchester (Mass.) Polytechnic Institute recently found that bumble bee exposure to neonicotinoids may be contributing to their decline across America.  Even small doses, the researchers discovered, reduce the survival of queen and male bees, which are critical to the survival of wild population. (See Worchester Polytechnic Institute news story.)

Bottom line: if bumble bees disappeared, it would not only be a Black Friday, but a Black Monday, Tuesday, Wednesday, Thursday, Saturday and Sunday. 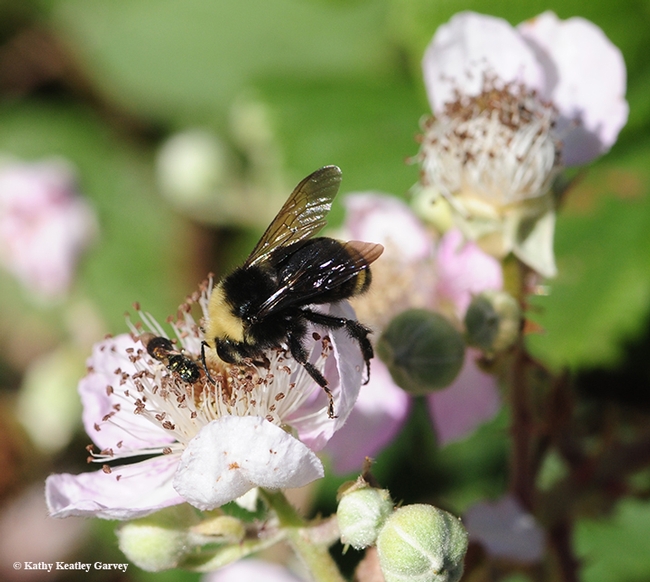 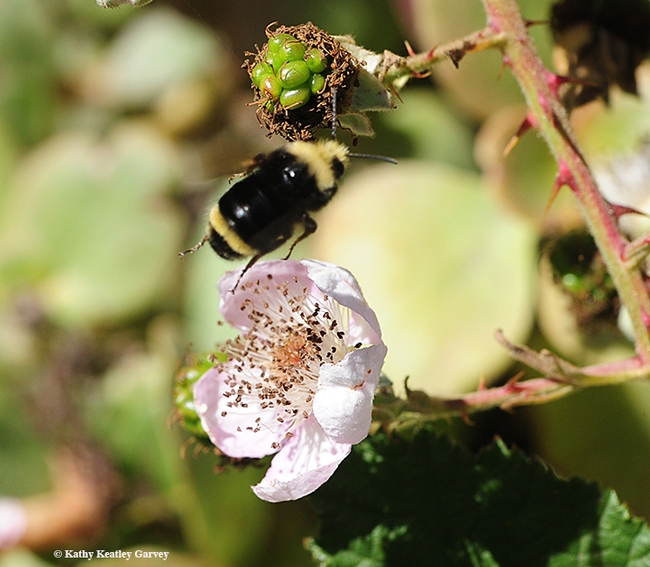