It's an invasive plant originating from the Cape Province in South Africa (Here's what the California Invasive Council says about it:

"Capeweed (Arctotheca calendula) is an annual or perennial evergreen herb that, when young, forms a low-growing rosette of heavily pinnately lobed leaves, with undersides covered by woolly down. With age, it forms an extensive, dense, mat-like groundcover by proliferation of rooting stems (stolons) from rosettes. Leaves are pinnately lobed; fine, dense hairs cause stems and leaves to appear silvery. Flowers are approximately two inches in diameter, lemon yellow, and daisy-like with yellow centers. The plant is conspicuous in late spring and early summer due to its increase in size and the profusion of large yellow daisies. Plants are seldom solitary, and they spread vigorously by creeping stems (Lasca Leaves 1968)."

Capeweed may have arrived in California in a shipment of grass seed from Australia, where it is a common weed, according to the California Department of Food and Agriculture.  The invasive species compendium (CABI) listed it as a noxious weed in 2010 in California.

However, it's cultivated as an ornamental ground cover and has both "fertile" and "sterile" forms.

We've seen lawnmowers run over the the weed in City of Benicia parks (yes, it grows back), we've seen it thriving in a gold carpet along coastal California, and we've seen bees foraging on it.

It's a pollinator paradise, of sorts, but it's also invasive. 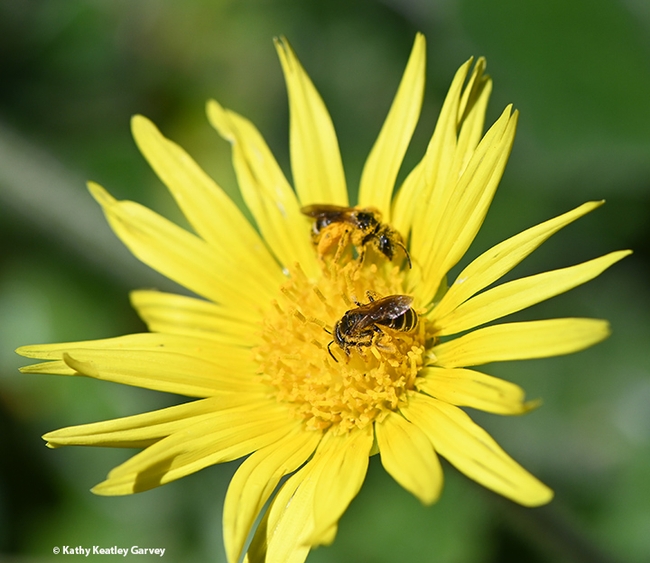