Proof of life: The male cabbage white butterfly that Art Shapiro caught on Jan 2, 2016, is shown here "reading" the New York Times. (Photo by Adrienne Austin-Shapiro)
What's the status of the "Beer for a Butterfly" Contest? Do we have a winner?

The good news: Art Shapiro found and collected a cabbage white butterfly (Pieris rapae) on Jan. 2, the day after New Year's Day, in a mustard patch along the railroad tracks in West Sacramento, Yolo County. The bad news: it's a 2015 butterfly, not a 2016 one. In other words, it's a fall brood spillover, and the contest is still underway.

Shapiro, distinguished professor of evolution and ecology at the University of California, Davis, sponsors the annual contest as part of his four-decade study of climate and butterfly seasonality.

The contest works like this: The first person finding a cabbage white butterfly within the three-county area of Sacramento, Solano and Yolo--and verified by Shapiro as the first of 2016--will receive a pitcher of beer or its equivalent.

"The cabbage white is typically one of the first butterflies to emerge in late winter," says Shapiro, who launched the contest in 1972. "Since 1972, the first flight has varied from Jan. 1 to Feb. 22, averaging about Jan. 20.”

Although the first flight of the cabbage white has been as late as Feb. 22, Shapiro says it is emerging earlier and earlier as the regional climate has warmed. “There have been only two occasions in the 21st century in which it has come out this late: Jan 26, 2006 and Jan 31, 2011.”

Shapiro, who has monitored the butterfly populations of Central California since 1971, has one of the two largest butterfly databases in the world.  He maintains a research website  at http://butterfly.ucdavis.edu.

The professor usually wins his own contest because he knows where to look. The  butterfly inhabits vacant lots, fields, and gardens where its host plants, weedy mustards, grow.

The cabbage white is regarded as a pest of cole crops (cabbage, kale, Brussels sprouts, cauliflower, radish, horseradish, arugula, canola, mustard, etc.)  "It is generally the commonest butterfly in and around urban and suburban areas, and routinely visits gardens," he says.

As for his catch on New Year's Day, Shapiro opted to look for it in West Sacramento (south side of the railroad embankment) where he had seen two cabbage whites on Dec. 22. "There had been two rapae there on the 22nd and at that time I had forecast a potential fall brood spillover into January, as happened in 1990  and 2013 and possibly 2012--there was a long lag time after the last December 2011 record."

New Year's Day, 2016, was overcast. "By 1:20 I had about given up and there were only brief sunny intervals. Then I noticed the triangular white form of a dorsal-basking rapae among dead annual litter! Once I convinced myself that's what it was--not a piece of paper--I caught it. It never took flight and it may have been too cold to do so."

The live catch is now in his Storer Hall lab. "It's an old male, definitely frazzled, the hindwing undersides faded, unambiguously autumn-phenotype and a 2015, not a 2016 bug. So the record goes in the book--first for 2016--but the contest remains open, as in prior spillover years."

Shapiro does not expect the first cabbage white of 2016 "very soon" due to lack of vegetation and inclement weather.

"The vegetation looks terrible," he explained. "There has been very little germination of Crucifers (mustard family) since November. Most of the non-grass seedlings are yellow star thistle and milk thistle; even Conium (carrot famiy) is scarce. There are areas, mainly under standing litter, where nothing has germinated at all."

Rain is forecast for much of the week and next week. "Although it's a sort-of El Nino pattern (lasting maybe through Saturday) and there is a chance of measurable rain every day next week (except Sunday), amounts will not be huge," Shapiro predicts. 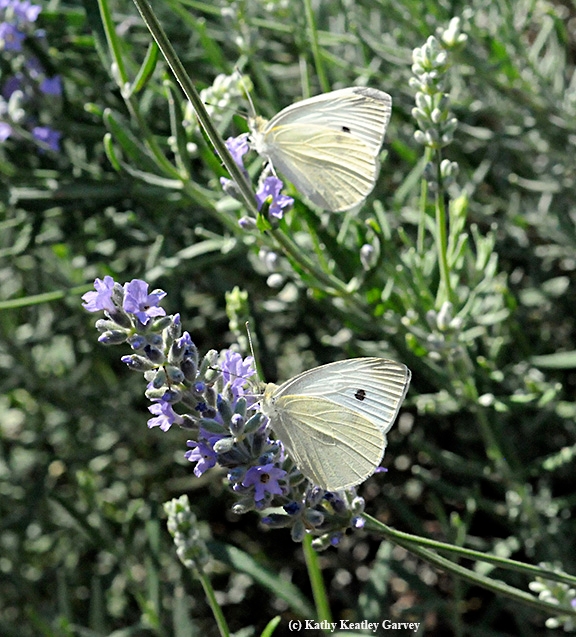