Flameskimmer with a bee breakfast. (Photo by Kathy Keatley Garvey)
You don't want to "get the red out" when a flameskimmer dragonfly visits your garden.

You want to let Big Red to stay in.

This male flameskimmer hung out in our pollinator garden in Vacaville on July 3 for a little over five hours. He perched on a bamboo stake, periodically circled to grab a few bees, and then returned to his post to eat them.

Flameskimmers, Libellula saturata, are a joy to watch as they circle, curve and dip to snatch their prey in flight. When they perch, they sometimes look like a biplane.

If you love dragonflies, note that the Bohart Museum of Entomology created an educational poster, "Dragonflies of California," the work of then doctoral candidate Fran Keller (now a professor at Folsom Lake College) and naturalist/photographer Greg Kareofelas of Davis. It focuses on 18 dragonflies commonly found in the Golden State. Keller is now a professor at Folsom Lake College. The Bohart Museum, home of nearly eight million insect specimens, is temporarily closed to the public due to COVID-19 pandemic precautions but the gift shop is online.

After an afternoon sunning and dining in our garden, Big Red left for parts unknown.

He was back today to stake out his claim and snatch a few more bees (in this case, Melissodes agilis and Svastra obliqua expurgata). Table for one? He needs no reservations, no menu and no wait staff. 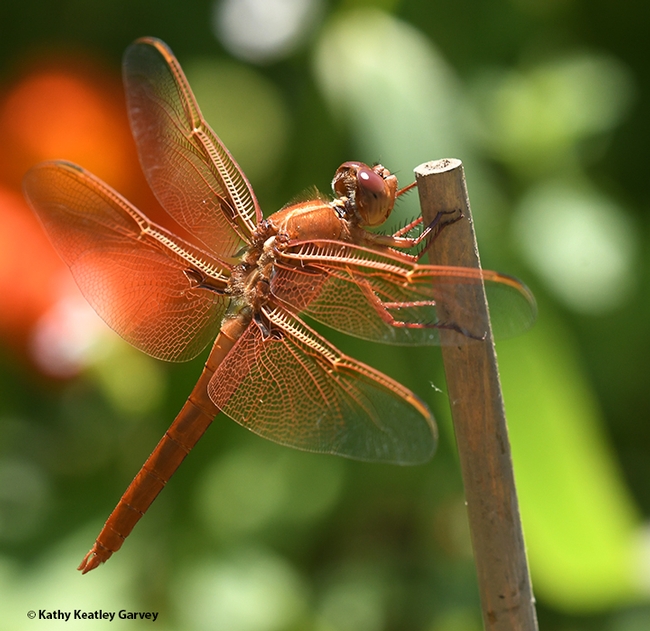 A male flameskimmer, Libellula saturata, perches on a bamboo stake in a Vacaville garden. In back is a Mexican sunflower, Tithonia rotundifola. (Photo by Kathy Keatley Garvey) 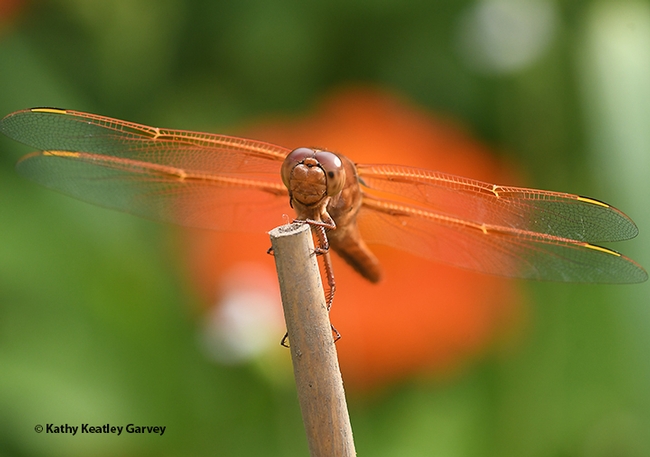 I usually can't get within 25 yards of a dragonfly.

Not so in our back yard.

A flame skimmer or firecracker skimmer (Libellula saturata) has apparently decided that this is where he wants to be.

Last Saturday, for nine hours, he perched on a six-foot-high bamboo stake, leaving only for a few seconds at a time to snag a flying insect before returning to eat his prey.

The flame skimmer, about a 2.5-inch Odonata, looks prehistoric. In fact, according to a UC Berkeley website, "The oldest recognizable fossils of the group (Odonata) belong to the Protodonata, an ancestral group that is now extinct. The earliest fossils so far discovered come from Upper Carboniferous (Pennsylvanian) sediments in Europe formed about 325 million years ago. Like modern-day dragonflies, the Protodonata were fast-flying with spiny legs that may have assisted in capturing prey; their wingspan was up to 75 centimeters (30 inches). The group went extinct in the Triassic, about the time that dinosaurs began to appear."

Meanwhile, back in our yard (325 million years into the future), Big Red kept snagging insects and flying back to his six-foot-high perch to eat them. Then occasionally he'd claim a five-foot-high bamboo stake. Too much high rise? A little acrophobia?

At first I kept my distance, hoping I wouldn't frighten him. However, he just looked at me as if I were part of the permanent landscape. Camera movement didn't faze him. After capturing multiple images from every angle possible, I thrust the macro lens about an inch away from his head. He did not move.

Am I a dragonfly whisperer or just lucky?

The flame skimmer prefers a habitat of warm water ponds, slow streams or hot springs. We have a fish pond, a pool and a birdbath in our yard, so I guess that's why he hangs out here.

And we have the perfect perches--bamboo stakes. They're meant to stake our tomato plants but now they're "dragonfly sticks."

We suspect Big Red won't last long. A Mama scrub jay is nesting in our shrubbery and when her babies chirp for food, off she flies in search of a tasty morsel. Mama Bird chased a bright orange gulf fritillary butterfly (missed!) and now, I expect, she'll go after Big Red. 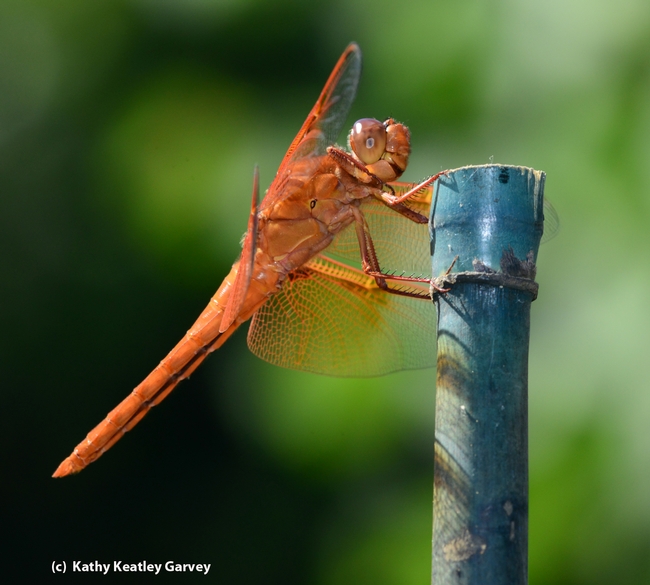 A flame skimmer perches on a bamboo stake. (Photo by Kathy Keatley Garvey) 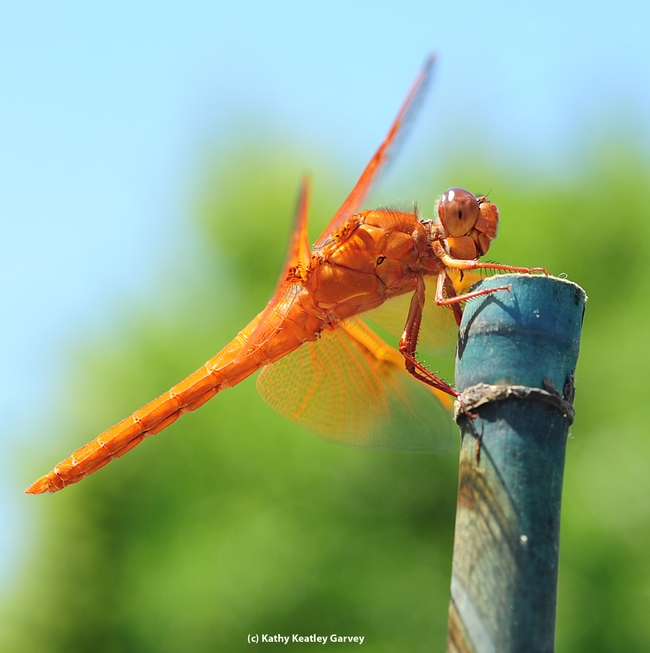 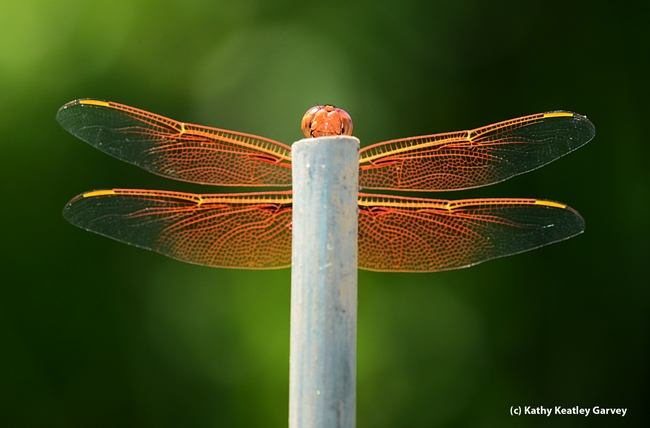 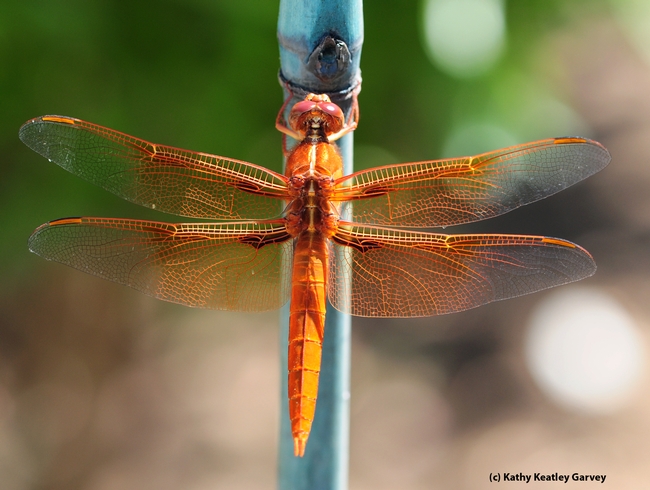 From the back, the flame skimmer is equally gorgeous. (Photo by Kathy Keatley Garvey) 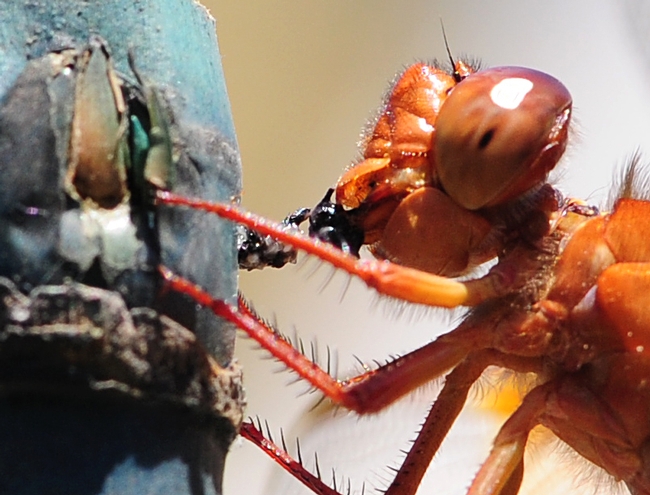