Francis Ratnieks in field of borage, Plumpton College, Plumpton, East Sussex, England.
How can we help honey bees through research?

That's the topic that Francis Ratnieks, professor of apiculture, University of Sussex, United Kingdom, will cover when he presents a seminar on Wednesday, Dec. 7 at the University of California, Davis.

He'll deliver the seminar,  "How Can We Help Bees Via Research? The Sussex Plan for Honey Bee Health and Well Being"  from 4:10 to 5 p.m.,  in 122 Briggs Hall.  He is a leading researcher on kin selection and social evolution. Ratnieks will be introduced by assistant professor Brian Johnson, who studies the behavior, evolution, and genetics of honey bees.

Ratnieks focuses his research on honey bees and social insects and addresses both basic and applied questions. One current area of research is aimed at helping bees by carrying out research with practical benefits to bees and beekeepers:

The seminar, open to all interested persons, will be recorded for later viewing on UCTV.  Here's where to access the Department of Entomology and Nematology's recorded seminars. 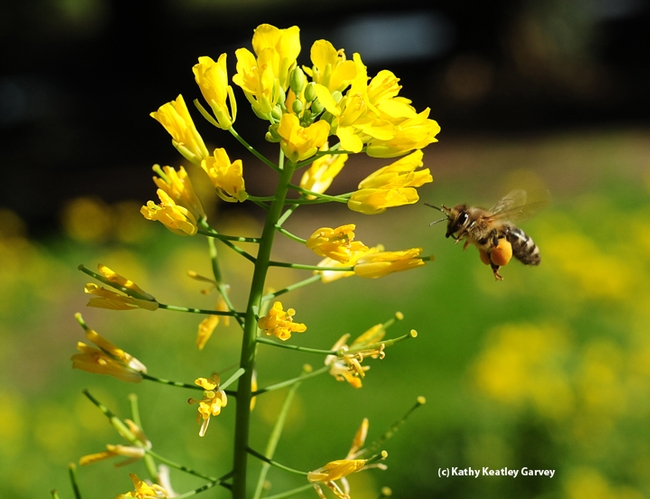 With all the talk about honey bee nutrition lately, just how much food does a honey bee colony need and how far can the workers fly to find find it?

"A healthy honey bee colony requires approximately 50 pounds of pollens and 100 pounds of honey to survive for 12 months," says Extension apiculturist Eric Mussen of the UC Davis Department of Entomology and Nematology, who will speak at both the Western Apicultural Society Conference and the California State Beekeepers' Conference this fall.

"Honey production exceeding 100 pounds may be harvested as a honey crop," he says. "From spring until late fall the adult honey bee population turns over at a rate varying from an initial high of around 2000 bees a day to 1000 in the summer, and to 0 in areas with real winter."

During the peak season, a queen bee can lay 2000 eggs a day. That's a lot of mouths for the nurse bees to feed. They need food, and lots of it.

"In order to meet the nectar and pollen demands to feed all that brood (immature bees) each colony has to have an acre-equivalent of honey bee-attractive bloom within foraging flight range," Mussen says. That's up to four miles from the hive and covers a 50-square mile area.

The foraging field force of a honey bee colony, he says, usually consists of one-third of the total population.  Some 40,000 to 50,000 bees comprise a colony during the peak season. The foraging population is subdivided into groups of bees specializing in collecting water, nectar or honeydew, pollen, or propolis (plant resin).

That's a lot of work for the foragers.

Here's how the numbers roll.

"Our best estimate is that California beekeepers maintain 500,000 colonies of resident honey bees, the number of colonies in California swells to around 1.6 million during almond pollination."

There's plenty of food for the bees during almond pollination season, as California almond acreage totals more than 800,000. Later, though, beekeepers are looking for temporary places to put their bees.

If bees were placed on prime locations, "they would require flight access to between 1 to 1.6 million acres, or approaching a maximum of 1.6 percent of California's landmass," Mussen points out.

"The demand for honey bee forage exceeds the floral quantities in areas readily available to beekeepers. To negate the need for having to feed the colonies supplemental, artificial feed, beekeepers hope to gain access to more areas that appear to contain adequate food. Besides being expensive, artificial feed does not contain all the required nutrient or the necessary microbial complex to meet the needs of honey bees."

That's why there's a concerted drive, Mussen says, for growers to provide "more bee forage along their field edges, interplanted as cover crops, or on fallow ground that they control."

Residents can do their part, too, by providing bee friendly plants. 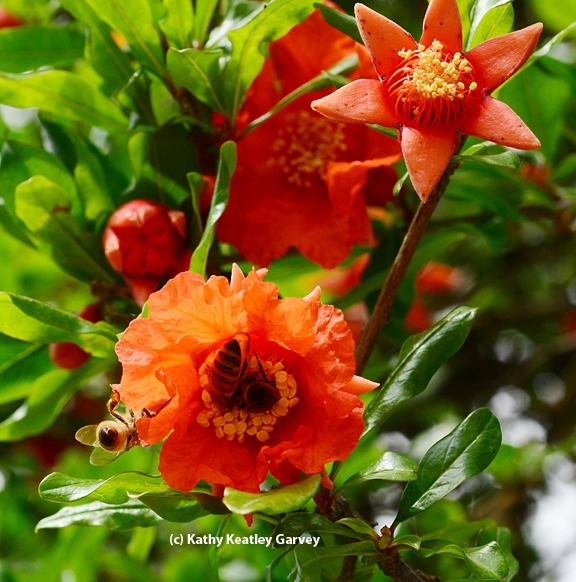 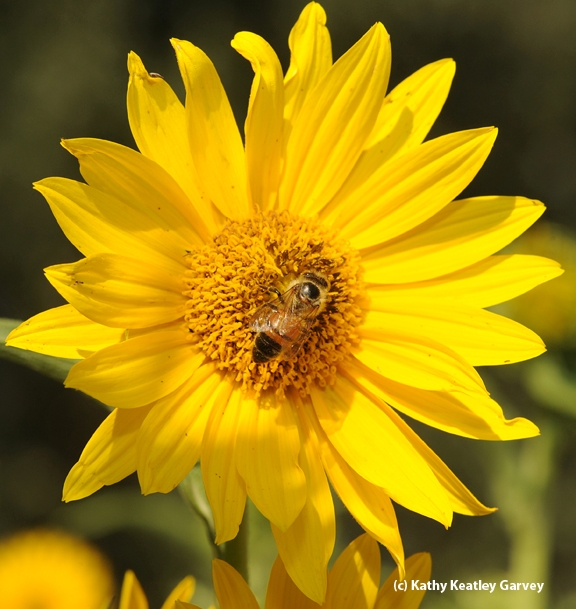 A single honey bee on a sunflower. (Photo by Kathy Keatley Garvey) 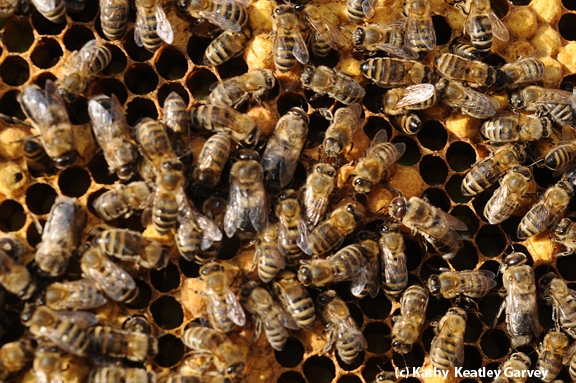 "Where do foraging bees go to die?"

That question was asked this week of honey bee guru Eric Mussen of the UC Davis Department of Entomology, who serves as the statewide Extension apiculturist.

"Do they return to the hive? Do they retire and live out their last days inside?" he was asked.

We've all seen worker bees in the throes of death. After all, they live only four to six weeks in the busy season. But the queen bee, which can lay some 2000 eggs a day, quickly replaces them.

"Since we do not know exactly where they go, we say that they fly off in the final moments of life, lose altitude and land on whatever is beneath them, moribund," Mussen says. "They are still able to sting for quite a few minutes, as can be attested to by neighbors who find moribund bees in their lawns or swimming pools, but they die relatively soon.  Bees have enzyme systems that deal with flight and when the enzymes give out, so does flight."

When those bodies lose some moisture, the "undertaker bees" carry away the lighter-weight bodies and drop them 150 feet or more away from the hive, studies show. "Most of the rest just drop, somewhere, when they no longer can forage or stay in the air," Mussen says. "Bees do fly up to four miles from the hive in any compass direction, so they drop out there in that 50-square mile area." 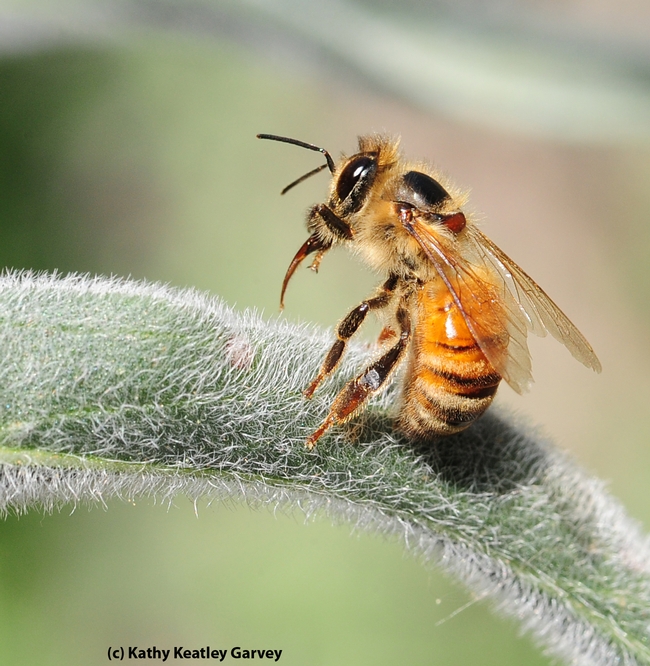 A worker bee staggers and extends her tongue. (Photo by Kathy Keatley Garvey) 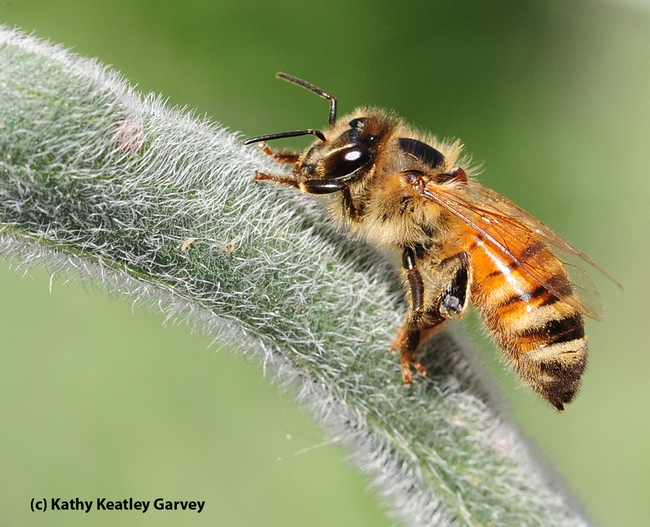