Forest entomologist Jackson Audley, lead author
A scientific research project may initially be deemed a failure, but failure can lead to success.

It did recently at the University of California, Davis.

The late Steve Seybold (1959-2019), a UC Davis-affiliated entomologist and global authority on the insect, fungus and disease, accidentally discovered an insect repellent when he was setting pheromone traps in Davis nearly two decades ago to assess the beetle's seasonal flight patterns. When he ran out of the adhesive, Stickem Special, he substituted Tree Tanglefoot.

Seybold, who specialized in the chemical ecology of forest insects, observed that every single beetle avoided Tree Tanglefoot, which contains the semiochemical limonene. Was Tree Tanglefoot a potential repellent? Maybe a very potent repellent?

Seybold, who died Nov. 15, 2019, never got to continue the research, but his mentee, Jackson Audley did and is the lead author of newly published research, “Trapping Failure Leads to Discovery of Potent Semiochemical Repellent for the Walnut Twig Beetle,“ in the Journal of Economic Entomology. Seybold is listed as a co-author. Chemical ecologist Steve Seybold, 1959-2019
“He was quite proud of it and excited about the discovery,” said Audley, who received his doctorate in entomology from UC Davis in 2019.  “This was actually something Steve and his lab first stumbled upon a few years ago, prior to me coming to UC Davis. This discovery ultimately paved the way for my PhD, in fact.”

While at UC Davis, Audley investigated behavioral chemicals that repel the walnut twig beetle from landing on English walnut trees. Audley is now a postdoctoral fellow funded by the Oak Ridge Laboratories and based at the USDA's Davis headquarters.

The repellent effect of limonene may be valuable in the development of a semiochemical-based tool for management of P. juglandis and thousand cankers disease, Audley points out.

“The trapping failure with the new adhesive occurred from May to September 2011,” Audley said.  “The chemical analyses and all of the subsequent testing of limonene occurred following that year. Most of the subsequent repellent trapping studies were conducted at the Wolfskill Experimental Orchards in Winters.”

“Limonene having a repellent effect on the walnut twig beetle was not particularly surprising,” Audley pointed out, “and repellency has been shown in other scolytines. It was more the manner in which this repellent semiochemical was found that was a little bit surprising. Limonene happened to be an additive in the formula for a secondary brand of adhesive used for sticky card traps that the lab used early on in walnut twig beetle trapping. The next step was to test limonene plus a few other repellent compounds in combinations (see Audley et al. 2020 https://doi.org/10.1007/s10886-020-01228-9) and then finally to test the most successful combination at reducing trap catches on individual trees to see if the combination conifers protection from colonization of the whole tree.” The final paper (testing the combination on walnut trees in an orchard) was submitted to the Journal of Economic Entomology  and “is under current review.”

Entomology Today, a publication of the Entomological Society of America, picked up the story and headlined it: "Scientists Stumble Upon Promising Repellent for Beetle Pest."  Audley told science writer Paige Embry, that "Oftentimes, the game for finding repellents, especially within bark beetle systems, is almost like a fishing expedition—of throwing a whole bunch out there and then slowly whittling down.”

Wrote Embry: “The next step is to figure out whether, and how, limonene can be used to protect individual trees and orchards—presumably something short of covering trees from top to bottom in Tanglefoot.”

"The walnut twig beetle, Pityophthorus juglandis Blackman, and its associated fungal pathogen that causes thousand cankers disease, currently threaten the viability of walnut trees across much of North America. During a 2011 assessment of seasonal flight patterns of P. juglandis with yellow sticky traps baited with the male-produced aggregation pheromone component, 3-methyl-2-buten-1-ol, dramatically reduced catches were recorded when Tree Tanglefoot adhesive was used to coat the traps. In summer 2011, two trap adhesives were tested for potential repellency against P. juglandis in a field trapping bioassay. SuperQ extracts of volatiles from the most repellent adhesive were analyzed by gas chromatography–mass spectrometry, and limonene and α-pinene were identified as predominant components. In field-based, trapping experiments both enantiomers of limonene at a release rate of ~700 mg/d conferred 91–99% reduction in trap catches of P. juglandis to pheromone-baited traps. (+)- and (‒)-α-Pinene reduced trap catch by 40 and 53%, respectively, at the highest release rate tested. While a combination of R-(+)-limonene and (+)-α-pinene resulted in a 97% reduction in the number of P. juglandis caught, the combination did not consistently result in greater flight trap catch reduction than individual limonene enantiomers. The repellent effect of limonene may be valuable in the development of a semiochemical-based tool for management of P. juglandis and thousand cankers disease." 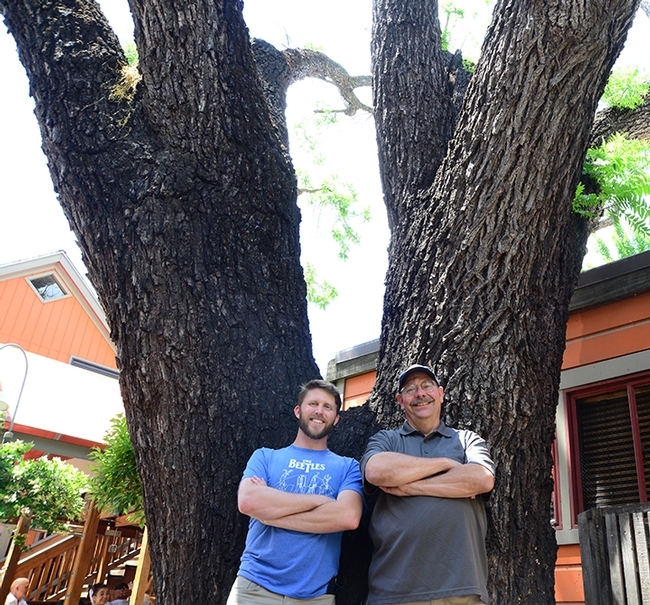 Forest entomologists Jackson Audley (left) and the late Steve Seybold next to a black walnut tree, the victim of thousand cankers disease, in downtown Davis. (Photo by Kathy Keatley Garvey) 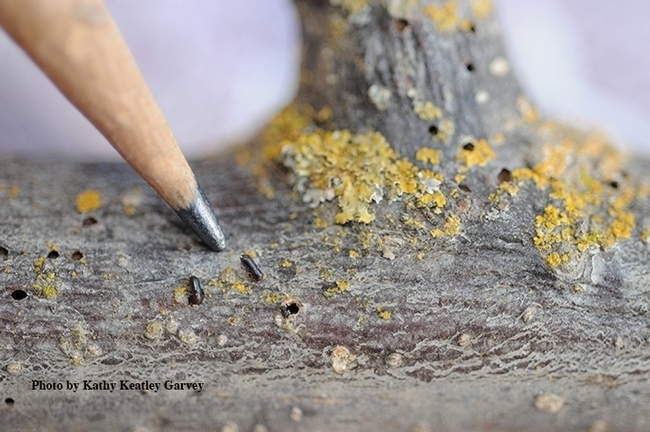