Bug Squad
sitenum=63
Happenings in the insect world
A WSU-Tagged Monarch: What a Traveler! What a traveler! From Ashland, Ore. to Vacaville, Calif. That's a straight-line distance of 285 miles, according to WSU entomologist David James. (Photo by Kathy Keatley Garvey)
What are the odds? What are the odds?

A monarch—the most special monarch ever--fluttered over our pollinator garden in Vacaville, Calif. on Monday afternoon, Sept. 5 and touched down on a Mexican sunflower (Tithonia).

As it sipped nectar, I glimpsed something white, round, and lettered, something I've never seen before in the wild. This one was tagged.

Shouldering my camera with a macro lens as long as a military tactical flashlight, I slowly edged around the garden, nearly hugging my new best friend, a cherry laurel hedge, as I tried not to look like a predator seeking prey.

Please, please, don't fly away. Stay still for a few minutes so I can read your tag. Please. Please. I want to know where you're from, how far you've traveled to get here.

As if on cue, Danaus plexippus stayed still and I shot away on the continuous mode setting with my camera, a Nikon D700 equipped with a 70-180 macro lens. It's a handy lens for fluttering monarchs and skittish insects that move in and out of your viewfinder.

But when I read the little round white tag, my eyes widened and I think I did a happy dance or a somersault or a pirouette. The tag, with a serial number, read “Monarch@wsu.edu A6093.” Oh, wow! This monarch is from my alma mater, Washington State University.

Where have you been, monarch@wsu.edu? I've been looking all over for you since Oct. 17, 2014 when I also encouraged others to look for you.

That's when I wrote a Bug Squad blog on WSU entomologist David James and his exciting monarch project.

The next time you see a monarch butterfly heading your way--or settled in at an overwintering site in coastal California or in central Mexico--check to see if it's tagged.

To put it frankly, A6093 and I became quite close. True-blue friends. Well, he's orange and black, actually. Still, it was a five-hour friendship. I first saw him at 1 p.m., and he hung around our pollinator garden for five hours. How did I know the gender? When he spread his wings, I saw the familiar black dots.

But here's what's really exciting. We emailed entomologist David James of WSU and learned that the monarch was tagged by Steven Johnson of Ashland, Ore. and released on Sunday, Aug. 28. “Information is slowly trickling in,” he wrote back today. “I think it likely that Steven reared it from an egg laid on his property."

"So, assuming it didn't travel much on the day you saw it, it flew 285 miles in 7 days or about 40.7 miles per day.  Pretty amazing. So, I doubt he broke his journey for much more than the five hours you watched him--he could be 100 miles further south by now."

"Clearly this male is on his way to an overwintering colony and it's possible we may sight him again during the winter in Santa Cruz or Pacific Grove!”

Maybe we'll get more tagged monarchs? "You could well find another tag in your yard!" James said. "We believe they do take defined routes (valleys, rivers) so you may well be on a 'route.'"

So apparently our yard was a fueling stop or an "oasis," as James put it. "The tagged male--had you been able to look inside its body--would have been full of 'fat body' and a very reduced reproductive tract..so his interest in the opposite sex is currently minimal..and it'll stay that way until Feb 2017!"

(Editor's note: If you see a WSU-tagged monarch, take a photo and let WSU know. Contact monarch@wsu.edu or the Facebook page. For more information about the project, see WSU's monarch butterfly news story about inmates' tagging project, and a news story on monarch decline.) 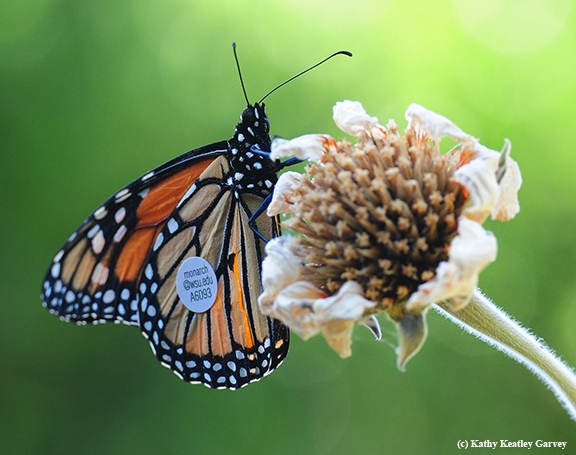 Where am I? A tagged male monarch butterfly, released from Ashland, Ore., perches on the head of a Mexican sunflower (Tithonia) in Vacaville, Calif., on Sept. 5, 2016. (Photo by Kathy Keatley Garvey) 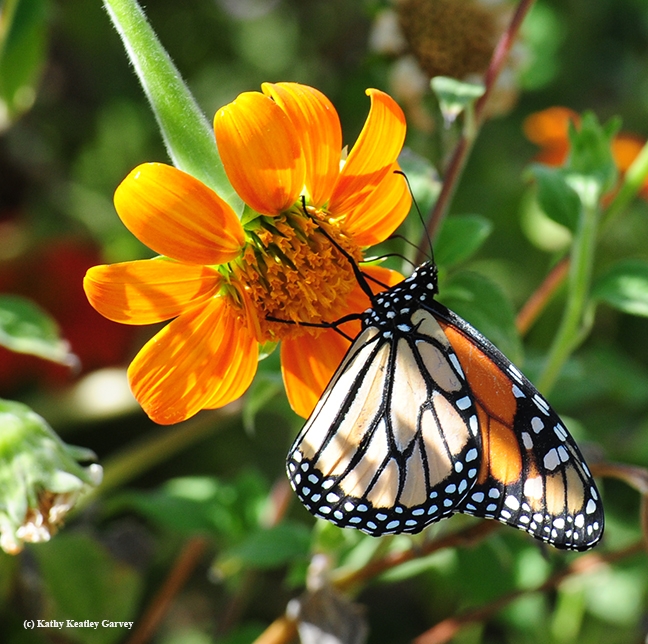 WSU-tagged male monarch from Ashland, Ore., sipping nectar on Mexican sunflower, Tithonia, in Vacaville, Calif. Tag, invisible in this photo, is on the other side.(Photo by Kathy Keatley Garvey) 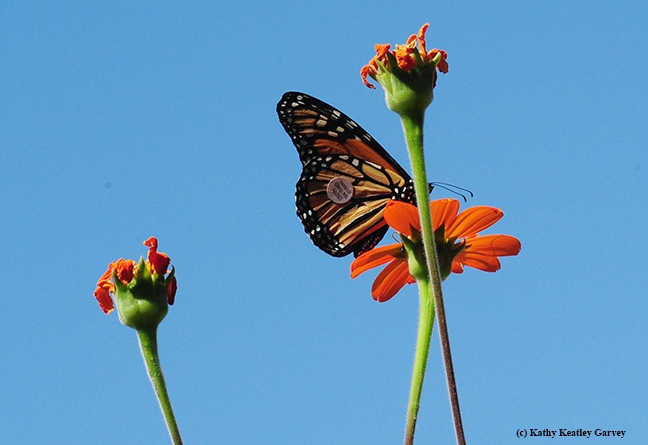 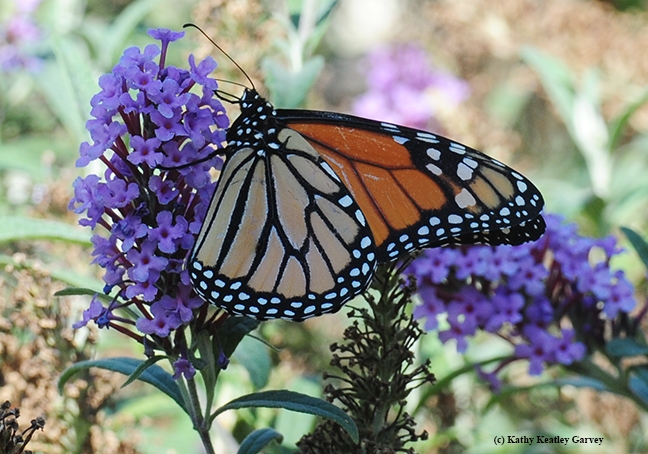