Look at the Xylocopa on the Xanthorrhoeaceae.

If that sounds like a mouthful, think of the mountain or foothill carpenter bees, Xylocopa tabaniformis orpifex, on bulbine from the genus Bulbine in the family Xanthorrhoeaceae.

Carpenter bees and honey bees are among bees attracted to the yellowish-orange flower with bearded stamens. A native of South Africa, it's also known as yellow bulbine, snake flower and cat's tail.

The carpenter bee below is a male nectaring on Bulbine frutescens.

The garden, owned and operated by the UC Davis Department of Entomology and Nematology, is open from dawn to dusk for self-guided tours. Admission is free. The art that graces the garden is the work of the UC Davis Art/Science Fusion Program.

The garden's mission: to provide a year-around food source for the bees at the Laidlaw facility and other pollinators; to draw attention to the plight of the bees; and to give visitors an idea of what they can plant in their own gardens. 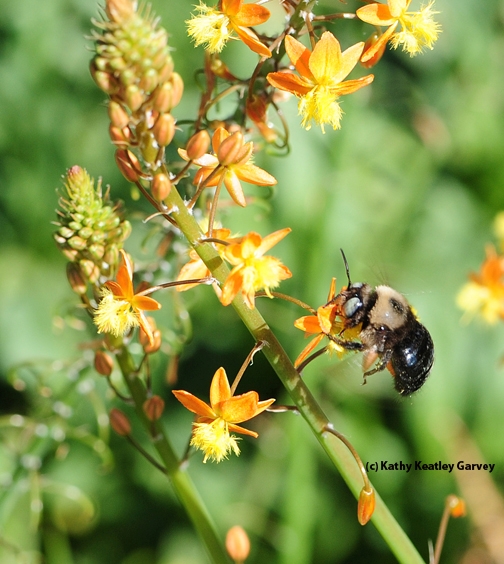 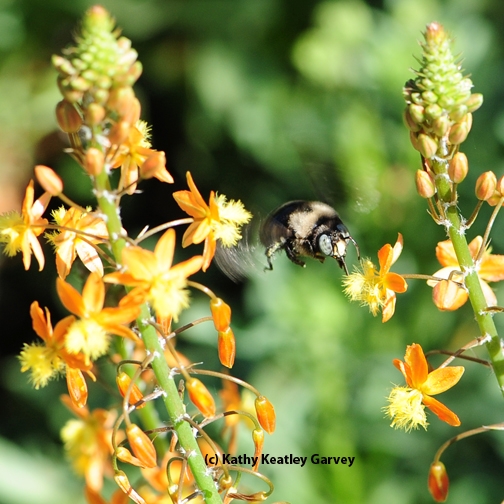 This one (below) is a male carpenter bee, Xylocopa tabaniformis orpifex, as identified by native pollinator specialist Robbin Thorp, emeritus professor of entomology at the University of California, Davis.

It's also called a "mountain" or "foothill" carpenter bee.

When it slits the corolla of the flower--in this case, salvia--and bypasses the pollination process--this is called "nectar robbing."

The male of the Valley carpenter bee is a green-eyed blond and often referred to as a "teddy bear." The female of that species is solid black. And huge!

The California carpenter bee or Xylocopa californica is known for its distinctive distinctive bluish metallic reflections on the body, Thorp says. The females have dark smokey brown wings.

The one photographed below, Xylocopa tabaniformis orpifex, is common in the center of the Central Valley, "probably due primarily to increased nest sites such as redwood arbors and fences," Thorp says. Although considered a pollinator instead of a pest, "it can be a pest when it gets into untreated redwood used for water tanks or structural timbers," Thorp points out. "The females are black with light smokey-colored wings.  The male has bright yellow marks on the lower part of its face and some yellow hairs on the top front of its thorax."

You can see the yellow hair on the thorax.

And how big is the smallest of the three carpenter bees? "Much larger than a honey bee, but about half the size of the other two carpenter bees," Thorp says. 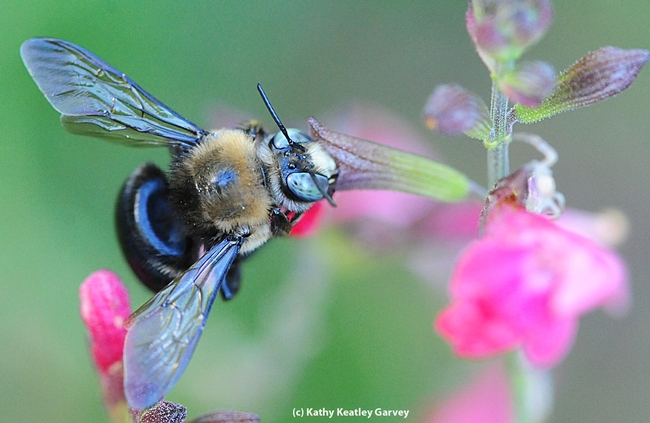 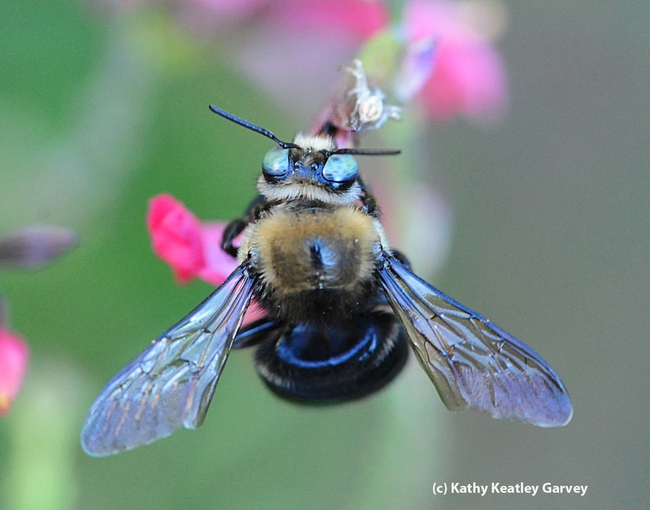