The search party is almost ready to start. If you're lucky, you'll net the prize before Art Shapiro does.

Art Shapiro, distinguished professor of evolution and ecology at the University of California, Davis, has announced his annual “Butterfly for a Beer" contest: the person who collects the first cabbage butterfly (Pieris rapae) of the year in one of three counties—Sacramento, Yolo and Solano—will receive a pitcher of beer or its equivalent. The butterfly must be collected outdoors and delivered live to the Department of Evolution and Ecology, Room 2320 of Storer Hall. (See rules)

As you may remember, Shapiro launched the contest in 1972 as part of his scientific research. Since 1972, the first flight of the cabbage white butterfly has varied from Jan. 1 to Feb. 22, averaging about Jan. 20. He predicts that the first butterfly of 2018 may be collected as soon as Jan. 5 or 6, “depending on the weather.”

He's usually the winner; he's been defeated only four times, and then by UC Davis graduate students.

And yes, he's had some humorous moments.

Some folks contact him way way way after it's all over and done (like in the spring!) with a collected specimen and ask him if they've won.

We thought about declaring ourselves the winner to the good professor after photographing dozens of them all spring and into summer and late fall and encountering hundreds more.

Meanwhile, starting Jan. 1, the cabbage white will be the most sought-after insect in the three-county area of Sacramento, Yolo and Solano.

They're not easy to find in January.  Neither are they always easy to photograph seasonally. They seem to flutter out of your viewfinder just as you're about to focus on them.  Wait, wait, come back! I'm not through yet!

Other times, they photobomb your long-awaited image, like last summer when I was zeroing in on a solo bee on a bluebeard (Caryopteris x clandonensis).

Webster defines photobombing this way: "to spoil a photograph of by unexpectedly appearing in the camera's field of view as the picture is taken, typically as a prank or practical joke."

In this case, they both wanted the same nectar. The photo amounted to a "two-fer"--two insects for the price (prize?) of one.

And then the determined cabbage white butterfly circled the hapless honey bee for another photobomb opportunity.  Aren't you done, yet? 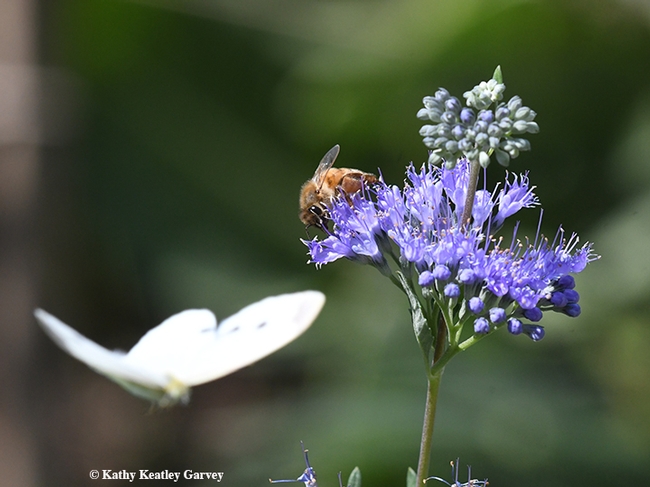 A cabbage white butterfly photobombs a honey bee on a bluebeard (Caryopteris x clandonensis). This image was taken in Vacaville, Calif. (Photo by Kathy Keatley Garvey) 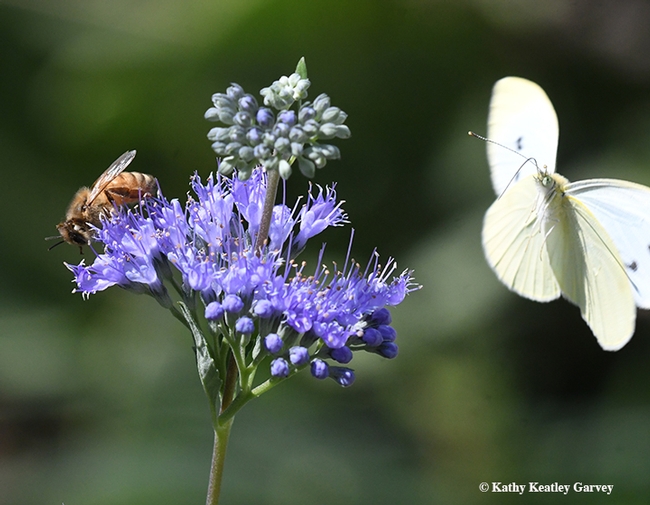