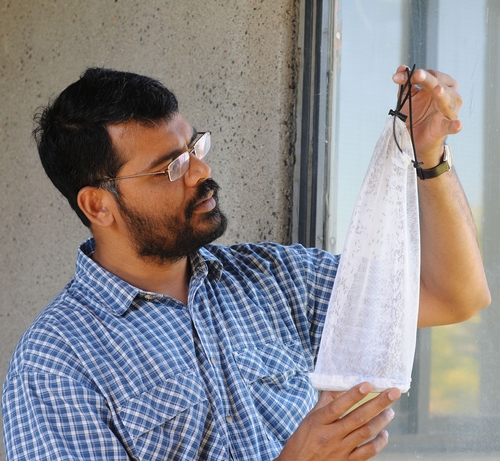 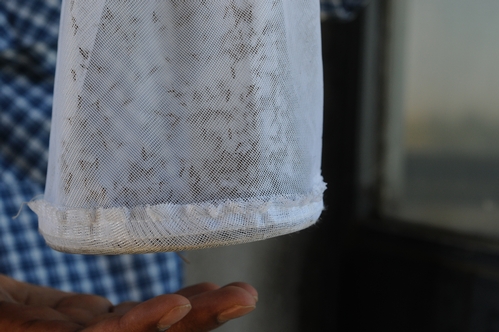 Close-Up
CLOSE-UP photo of a mesh bag of 2000 Culex mosquitoes shows them drawn to his hand below. He trapped the 2000 all in one night at the Yolo Causeway and has trapped as many as 3000 there in a single night. (Photo by Kathy Keatley Garvey)
Tags: Culex (3), mosquitoes (24), rice fields (1), Walter Leal (74), Yolo basin (1), Zain Syed (7)
Comments: 0
Last story >>
Viewing -3--3 of 1
Recent Posts
Highly Successful UC Davis COVID-19 Symposium Is Now Online
January 14, 2021
A Delight to See in January: A Bombus in Benicia
January 13, 2021
On Making a Mountain Out of an Ant Hill
January 12, 2021
Recent Comments
Joel Gerwein: Dec 25, 2020: I just saw some of...
Dive Travel World: Such an amazing article. Keep...
Nippon Energy: Thank you so much to share this...
Charanjeet Singh: I am a beekeeper and I am from...
Top Tags
• Bohart Museum of Entomology • UC Davis Department of Entomology and Nematology • honey bees • Lynn Kimsey • Robbin Thorp • Eric Mussen • Art Shapiro • honey bee • UC Davis • Harry H. Laidlaw Jr. Honey Bee Research Facility • praying mantis • Tabatha Yang • UC Davis Department of Entomology • Entomological Society of America • Haagen-Dazs Honey Bee Haven
/ RSS / Podcast