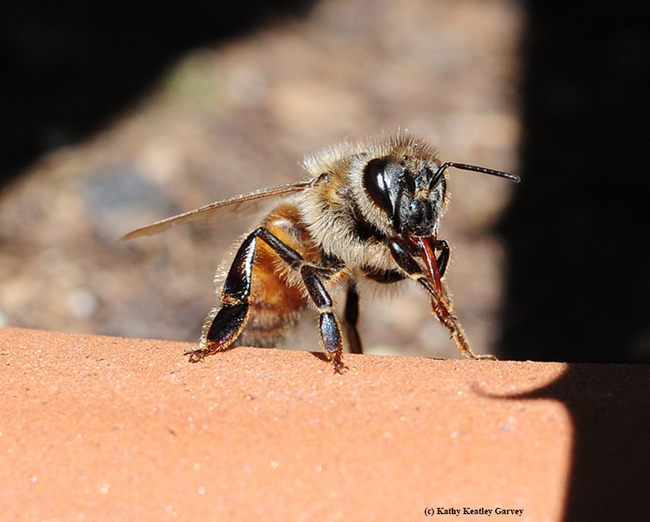 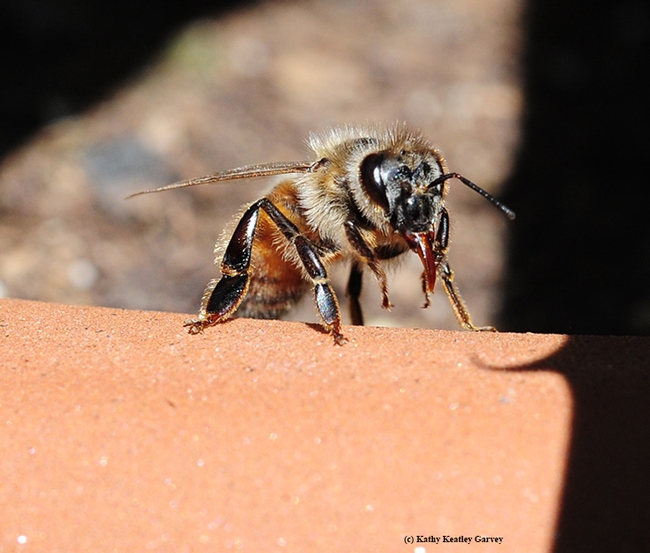 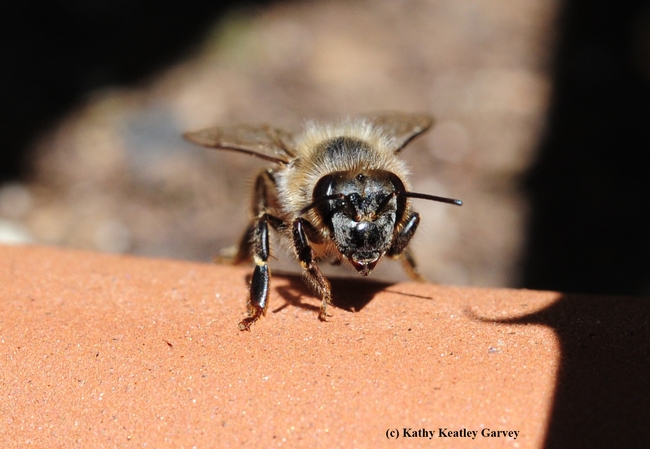 Blue merle mini-Australian shepherds have one.

So do honey bees.

For a puppy, the tongue can symbolize pure happiness. For a worker honey bee: a solid work ethic.

It's easy to take a photo of a happy puppy with her tongue hanging out, but not so easy to capture an image of a honey bee nectaring a flower--unless you have a macro lens,  a quick trigger finger and a state of endurance called patience.

To be technically correct, entomologists refer to the honey bee "tongue" as "mouthparts." That would be the tubelike organ that enables them to nectar flowers and serve as nursemaids and undertakers and the like.

If you want technicality, be sure to read the excellent textbook The Insects, an Outline of Entomology, written by UC Davis entomologists Penny Gullan and Peter Cranston.

"The mouthparts of bees are of a chewing and lapping type," they write. 'Lapping is a mode of feeding in which liquid or semi-liquid food adhering to a protrusible organ, or 'tongue,' is transferred from substrate to mouth. in the honey bee, Apis mellifera (Hymenoptera Apidae), the elongate and fused labial glossae form a hairy tongue, which is surrounded by the maxillary galeae and the labial palps to form a tubular proboscis containing a food canal. In feeding, the tongue is dipped into the nectar or honey, which adheres to the hairs, and then is retracted so that adhering liquid is carried into the space between the galeae and labial palps.  This back-and-forth glossal movement occurs repeatedly. Movement of liquid to the mouth apparently results from the action of the cibarial pump, facilitated by each retraction of the tongue pushing liquid up the food canal."

"The maxillary laciniae and palps are rudimentary and the paraglossae embrace the base of the tongue, directing salvia from the dorsal salivary orifice around into a ventral channel from whence it is transported to the flabellum, a small lobe at the glossal tip; saliva may dissolve solid or semi-solid sugar. The sclerotized, spoon-shaped mandibles lie at the base of the proboscis and have a variety of functions, including the manipulation of wax and plant resins for nest construction, the feeding of larvae and the queen, grooming, fighting and the removal of nest debris including dead bees.

And you thought the mouthparts of a bee were simple? Not at all.

Be sure to read this again. There will be a test tomorrow. 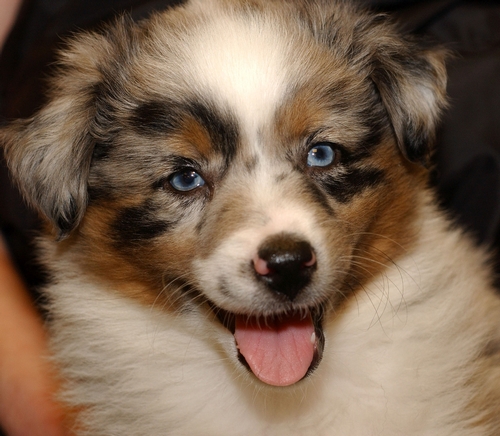 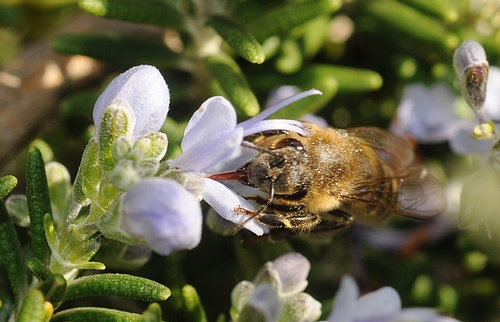