The economy is tanked. The cuts keep coming. The smiles fade.

Bruce? That would be Bruce Hammock, distinguished professor of entomology at the University of California, Davis, and a longtime member of the National Academy of Sciences. He and fellow researchers, faculty, staff and students will leave their offices and labs at 1:30 p.m. to fill up 2500 water balloons, and then exactly at 3:45 they will...ahem... throw them at each other on the north lawn of Briggs Hall.

Fact is, they work hard and they play hard. The annual balloon battle is how they spell R-E-L-I-E-F.

Hammock's research and daily schedule would overwhelm most scientists. He holds a joint appointment in cancer research with the UC Davis Medical Center. He  directs the National Institute of Environmental Health Sciences (NIEHS)  Superfund Program on the UC Davis campus, as well as the National Institutes of Health (NIH) Training Program in Biotechnology and the NIEHS Combined Analytical Laboratory. His discovery of an enzyme inhibitor that holds promise to control human diseases (such as hypertension, diabetes, asthma and cystic fibrosis) is now a first-in-class drug in human clinical trials.

But this noted entomologist who switched his research from pest control to human pain control, also excels at water balloon battles--so much so that nobody, but nobody can beat Bruce Hammock.

The best part is when the water warriors deplete their water supply and chase each other with tubs and buckets of water.

Aftter the 2006 battle, we asked Jason Graham, a forensic entomology researcher who works with blow flies and maggots, if he planned to compete the following year. "I'd like to participate next year," he said, "but I don’t think they’d appreciate what we have to throw.” 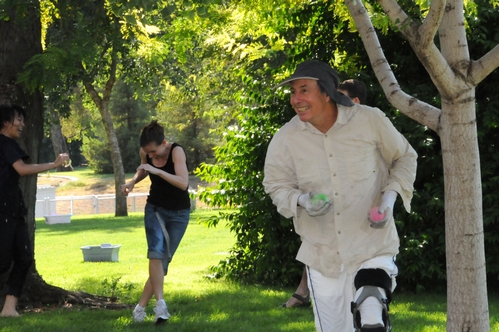 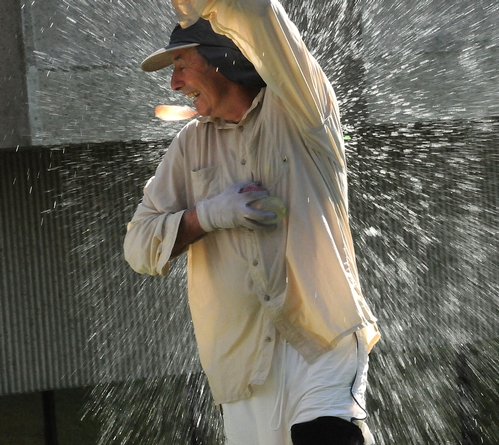