Close-up of water mites on a damselfly. (Photo by Kathy Keatley Garvey)
If you've ever been "up close and personal" to a damselfly, you might have seen the water mites.

Naturalist Greg Karofelas of Davis, an associate of the Bohart Museum of Entomology, has not only seen them, he has photographed them. See his truly spectacular photo below.

The mites look like a cross between pomegranate kernels and salmon eggs. They are hitchhikers!

It's a good case of phoresy, or the symbiotic relationship in which one organism transports another organism of a different species.

Scenario: Say a damselfly is laying her eggs in a fish pond or the wetlands. Say some mites are waiting for her. They seek free meals and a free ride to the next pond to find mates and reproduce.

The damselfly dips down. They jump up.

As for the image of the water mites that Greg Kareofelas captured, he suspects they may be Arrenurus mitoensis. 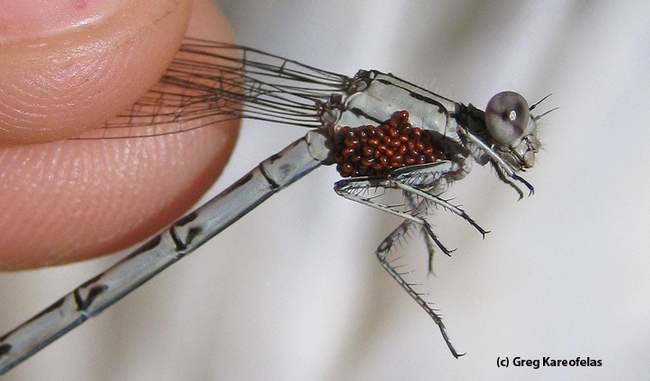 Water mites on a damselfly. (Photo by Greg Kareofelas, taken with a Canon Elph) 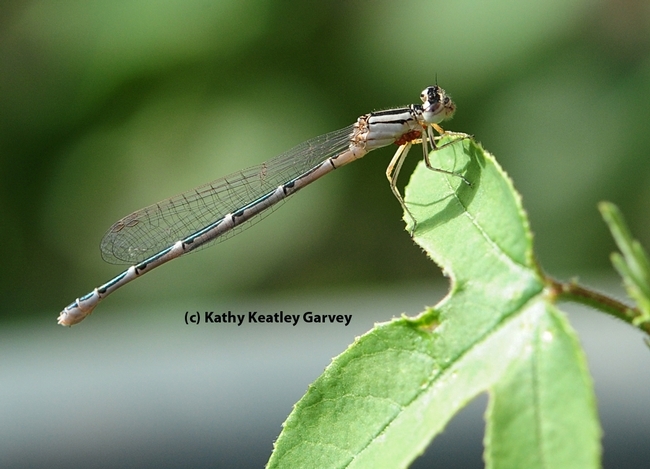 Close-up of water mites on damselfly. (Photo by Kathy Keatley Garvey)
It pays to have a pond.

A pond attracts dragonflies and damselflies.

Last weekend, though, we spotted a damselfly a good 65 feet away from our pond. It touched down on our passion flower vine (Passiflora). Lights, camera, action...

The enlarged photo revealed a surprise: a cluster of something reddish-orange  beneath the thorax.

Now that's something you don't see every day!

"Phoresy," said entomology graduate student Lesle Saul-Gershenz, and professor Sharon Lawler, both of the UC Davis Department of Entomology and Nematology. Phoresy is a symbiotic relationship in which one organism transports another organism of a different species. Bottom line: these bright red mites, from the tick family, are hitchhikers that feed on body fluids. They jump off when the host drops down over a new pond or wetland.

What's the effect of water mites on damselflies? Surely, that parasitic load of arachnid hitchhikers must be cumbersome.

Scientists Jose Andres and Adolfo Cordero of the Universidade de Vigo, Pontevedra, Spain,  took a close look at parasitism in their research “Effect of Water Mites on the Damselfly, Ceriagrion tenellum,”  published in a 2002 edition of Ecological Entomology.

1. "Water mite parasitism is expected to have an important effect on damselfly survivorship and reproductive success, because mites drain considerable amounts of body fluids from their hosts," they wrote in their abstract. "This study tests the effect of water mite parasitism in a marked population of the damselfly Ceriagrion tenellum during 1995 (individuals marked as mature adults) and 1996 (individuals marked as tenerals)."

2. "Almost all teneral individuals were parasitized (98%) and mites were aggregated strongly on some individuals. Parasite load increased during the season."

3. "Parasites had no effect on the probability of recapture of hosts as mature adults. The average daily survival rate of lightly- and heavily-parasitized individuals, estimated with Jolly's stochastic method, did not differ significantly."

In conclusion, they found that "water mite parasitism does not reduce damselfly survivorship, but it could reduce male mating success in some circumstances. Further long-term studies are needed, especially in populations with a lower incidence of parasitism."

As for our little damselfly, it lumbered away with its distinctive load of little red hitchhikers clinging to its thorax... 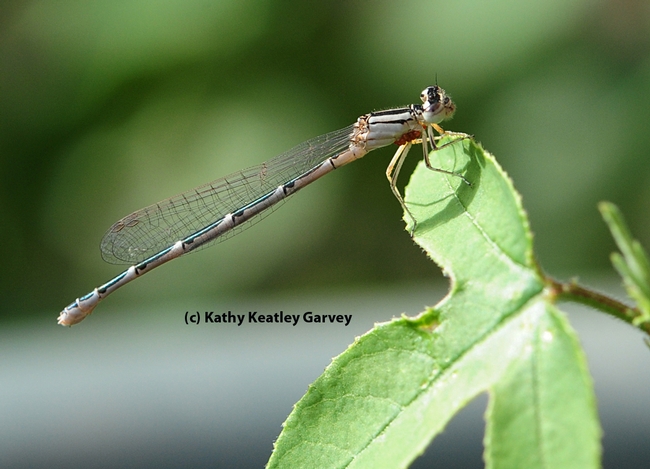