Reisen was nominated by the Contra Costa Mosquito and Vector Control District for "his special and significant contributions to the field of mosquito and vector control."

"Dr. Reisen's career spans over forty years during which he has published over 260 peer-reviewed publications and book chapters in the field of medical entomology," wrote nominator Craig Downs, general manager of the Contra Costa MVCAC District.

"Throughout his career, Bill has directed projects studying the vector competence of mosquitoes for newly introduced viruses, established new surveillance testing paradigms, and initiated complex interactive networks, sharing surveillance data with mosquito control agencies and public health officials to speed mosquito control response times and to minimize disease risk to humans. Several examples of his continual scientific contributions include: the effects of climate variation on arthropod-borne pathogen transmission, modeling efforts for predicting arbovirus risk, the application of insecticides for reducing the disease burden of West Nile virus in California, the use of liquid suspension array technologies for the identification of mosquito blood meals and his keen observation of the role of stagnant swimming pools as breeding sites for Culex spp. vectors in Sacramento County.” Medical entomologist William Reisen water-testing mosquito habitats near Lahore, Pakistan in 1976.
Downs said Reisen "has assisted MVCAC and its members in numerous other ways, from his work as director of CVEC, serving on committees, and working directly with districts on specific research projects. He has also guided the careers of a number of MS and PhD students and post-doctoral fellows, many that have gone on to careers that have advanced MVCAC's mission. We cannot think of any individual who would qualify more as having made an outstanding contribution to the field of mosquito and vector control."

Internationally known for his mosquito research and publications spanning more than four decades, Reisen is now a professor emeritus with the Department of Pathology, Microbiology and Immunology (PMI), School of Veterinary Medicine. He is the former director of the Center for Vectorborne Diseases (CVEC). He serves as the editor of the Journal of Medical Entomology, and has advised many graduate students affiliated with the UC Davis Department of Entomology and Nematology, PMI or CVEC.  He is currently assisting in the completion of four doctorate and one master thesis.

Read more about Reisen's career on the UC Davis Department of Entomology and Nematology website.

Meritorious service awards may be conferred on MVCAC members or non-members "who have made special and significant contributions to the field of mosquito or vector control in the State of California," according to the award criteria.

Reisen is one of only three UC recipients of this statewide award since 1981. William C. Reeves (1916-2004), UC Berkeley emeritus professor of epidemiology, and Bruce Eldridge, former director of the statewide UC Mosquito Research Program, based at UC Davis, and now professor emeritus of entomology, earlier received the award. 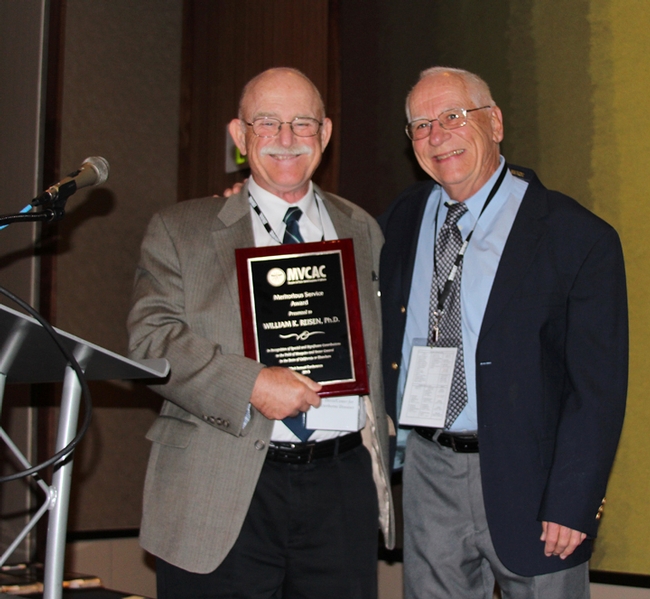 He managed the Butte County Mosquito Abatement District, Oroville, from 1966 to 1992. He was an ardent supporter of the judicious use of public health pesticides to protect public health.

Bruce Eldridge, emeritus professor of entomology at UC Davis, eulogized him at the 2005 annual meeting of the American Mosquito Control Association (April 4) as "a man who made a difference." His talk, illustrated with photos, was published in the 2006 edition of the Journal of the American Mosquito Control Association.  (See PDF)
"He was a medical entomologist who had a varied career in the field of mosquito biology and control, but he will forever be remembered as a man who fought in the trenches of the pesticide controversy from 1960 until the end of his life, and who made the safe and efficient use of pesticides in public health a personal crusade," Eldridge said.

Eldridge noted that Hazeltine "was an advocate for the use of mosquito control to protect people from mosquitoes and the disease agents they transmit, and he believed chemical control to be a necessary part of the means to accomplish this. He also considered himself an environmentalist, and billed himself as such on his business cards and on his signature block. He had a vast knowledge of pesticides and pesticide legislation, and a strong belief in the scientific basis for public policy issues related to the safe and effective use of pesticides. Because the federal Endangered Species Act influenced mosquito control, he became an authority on this as well." William Hazeltine in U.S. Navy, 1944.
Eldridge described Bill as "an effective manager and leader at Butte County. Those who took the trouble to get to know him developed a strong allegiance to him. Most appreciated his absolute honesty and fairness. Not only was Bill honest to a fault, he expected it of people who work for him as well."

Hazeltine's message about pesticides never strayed, Eldridge sad. His positions on pesticide use and regulation included:

1. Decisions on pesticide use should be made by competent people and based on good data

2. Biological contorls are good, and must be used, but chemicals are also necessary for an effective program.

3. When you discuss pesticides, do not stipulate to something just to get acceptance.

4. There is a real need for continuing educaiotn, which is a mark of professionalism.

In closing, Eldridge said that much of AMCA's current involvement with federal legislation affecting mosquito control stems from Hazeltine's work.

Hazeltine, born Sept. 4, 1926 in San Jose, was the youngest of six children born to Karl Snyder Hazeltine and Rachel Josephine Crawford Hazeltine. Karl, a graduate of the University of California, served on the faculty of San Jose State University, where he taught agricultural and natural science. Rachel, a graduate of San Jose State, was a teacher.

William Hazeltine's son, Craig, of Scottsdale, Ariz: commented: "Three recollections: Dad grew and changed over the years. The reports may cast him as a constant iconoclast, but he learned to love and be loved. When I became a Christian in college, I felt compelled to tell my Dad 'I love you' often and to back it up with a hug. He was like a stiff board at first, but later on was almost a menace with his wonder hugs.

"Dad was not so gruff as he was 'occupied.' I figured out early on that the best way to spend time with him was to help him with his projects--and there was always something in the works. He was always reading, studying, and trying new things.

"Dad was extremely well-documented. After a debate at Chico State in the late 60s, we talked about having references at the ready to refute bad arguments. This led to a couple of very full boxes that traveled in the trunk of his car with copies of published works that backed up his positions. And that in addition to the famous stacks of re-prints in his home office."