The award will be presented at the college's Celebration of Advising Reception, set from 4:30 to 6 p.m., Tuesday, May 2 in the Robert Mondavi Institute Sensory Theater, Old Davis Road. Also honored will be student advisor Emma Martinez of the Student Affairs Officer, Animal Science.

The committee was especially impressed with Yang's focus on student diversity, his efforts in helping students link their academic studies to research and other career goals, and his innovative programs working with high school students and connecting these students with undergraduate and graduate student mentors, said Sue Ebeler, the CA&ES associate dean of Undergraduate Academic Programs.

“His tremendous contributions in advising students seeking to expand their research experience, and programmatic development to enhance such opportunities have helped change the face of undergraduate education in our department,” wrote nominator Steve Nadler, professor and chair of the UC Davis Department of Entomology and Nematology. Nadler described him as a gifted teacher, mentor and scientist who has been instrumental in influencing the lives of many undergraduates.

Yang, who holds a bachelor's degree (ecology and evolution) from Cornell University, 1999, received his doctorate from UC Davis in 2006, and joined the UC Davis faculty in 2009. He is one of the co-founders of the campuswide Research Scholars in Insect Biology (RSPIB)  with professors Jay Rosenheim and Joanna Chiu. The program's goal is to provide academically strong and highly motivated undergraduates with a multi-year research experience that cultivates skills that will prepare them for a career in biological research.

In addition to his RSPIB mentoring, Yang mentors many undergraduates in his lab. He has welcomed and mentored students from UC Davis and from around the country with the National Science Foundation Research Experiences for Undergraduates Program (Natalie Gonzalez and Jacob Penner) and the UC Davis-Howard University Historically Black Colleges and Universities (HBCU) Ecology & Evolution Graduate Admissions Pathways (EEGAP) program (Kabian Ritter).

In the past year, Yang mentored 15 undergrads in his lab. The studies involved:

“The goal of the MMMILC Project is to better understand the ecology of milkweeds and monarch butterflies,” Yang explains on his website. “We are particularly focused on understanding the role of seasonal timing (phenology) on the interactions between milkweeds and monarchs…While this project is centered around milkweed-monarch interactions, we are really interested in all of the creatures that interact with milkweed. The ecological community of surrounding milkweeds includes lots of fascinating species interactions, and we are interested in understanding how those interactions are connected over time.”

Yang strongly supports student diversity, under-represented groups, and graduate education. Two of his undergrads were supported by a supplemental Research Experiences for Undergraduates (REU), including one Latina. He has mentored grad students from the Entomology Grad Group, the Grad Group in Ecology and the Pop Bio Grad Group. He serves on many guidance, exam and advising committees. He also has participated in mentoring workshops at the Center for Population Biology.

Also noted for his teaching and research, Yang was nominated by the Associated Students of UC Davis in 2012 for an Excellence in Education Award. He received a prestigious National Science Foundation Faculty Early Career Development Award of $600,000 in 2013. 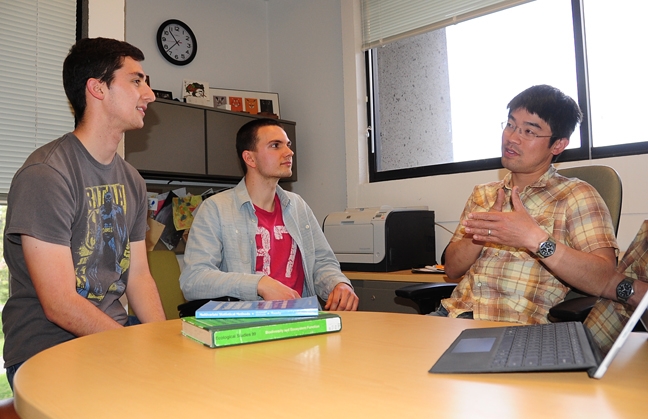