Entomology & Nematology News
sitenum=270
UC News about Entomology and Nematology.
Insects: The Food of the Future
Published on: November 6, 2014 The protein-rich delicacies drew mixed reactions at the “Bugs and Beer” event hosted recently in the Robert Mondavi Institute for Wine and Food Science's Silverado Vineyards Sensory Theatre at the University of California, Davis.

Gordon, from Seattle, joined “The Pope of Foam” Charlie Bamforth--the Anheuser-Busch Endowed Professor of Malting and Brewing Sciences in the UC Davis Department of Food Science and Technology--to pair six bug dishes with six different beers.  The theme: “Bugs and Beer—Why Crickets and Kölsch Might Be Matches Made in Heaven."

Their quips and puns punctuated the four-hour event. Coordinator Elizabeth Luu, a UC Davis student-employee at RMI who originated the idea of the beer-bug fest, praised the humorous duo as “a match made in heaven.”

Clare Hasler-Lewis, RMI executive director, welcomed the capacity crowd.  “Who's going to want to eat bugs--and drink beer with them? I did eat a cricket this morning—without beer—and it was good.” UC Davis student Ursula Selby eating a Cambodian cricket.
Luu, who said she occasionally practices entomopaghy, told her fellow bug eaters:  "The more disgusting the bug, the more I want to eat it." She recalled the day she approached Bamforth in his classroom and asked “What do you think about this, pairing beer with bugs?” He deadpanned: “I think I should kick you out of the room today."

As it turned out, the beer-bug fest was a kick: “one of the best-ever events we've had at RMI,” said Hasler-Lewis, who said "Let's do this again!" Some participants asked that it be an annual event. "This event was a fun way to introduce a sustainable food supply that is as common in other areas of the world as our hamburger," Wishon said. "While I don't expect the 'cricket burger' to replace hamburger anytime soon, it is important that we start opening our food horizons now before it is no longer a choice. I spent all my time in the kitchen--which is laughable for anyone who knows me--but if anything could make that happen it would be by putting insects in the kitchen with me. This was an experience I will not soon forget! Strangely, my friends and family have declined to let me practice my new cooking skill to make them dinner."

Anne Schellman, manager of the UC Davis California Center for Urban Horticulture who attended with friend Javier Miramontes, a community education specialist for UC Agriculture and Natural Resources in Fresno, said her favorites were the European house crickets andgrasshopper kebobs.  “They were both chewy but crunchy and had good flavor,” she said.

She wasn't so sure about the Cambodian crickets.  “I ate the head and part of the body--after I pulled off the legs and played with the wings,” Schellman said. “It was just too darned big and intimidating to eat it (all).”

“It had an interesting flavor, and the ‘meat' inside actually kind of looked like an artichoke heart in coloring and also texture. Javier ate the cricket whole--I didn't even see him do it he was so fast. A piece of leg got stuck in his throat, and he was trying to keep from gagging, poor guy!” Mealworms are the delicacy in this dish.
Ursula Selby, a UC Davis junior majoring in neurobiology, physiology and behavior, attended with her husband Ian Gamble. “I've always wanted to eat sago worms ever since I saw the movie, 'The Lion King,'" she said. “The movie made the sago worms look delicious.”

And they were, Selby confirmed.

Sago worms are the immature larvae of the red palm weevil. “Sago worms eat palm trees, and we can't import sago worms,” Gordon said. “If they got loose in Los Angeles, they would change the identity of the city.”

RMI program representative Evan White, who does design and communications, said he especially loved two dishes: the pear-spinach-ant salad “with the crunchy weaver ants” and  the dessert, the chocolate-dipped chapuline grasshoppers. “But then anything with chocolate is delicious,” White said.

White did not eat the Cambodian crickets, which he described as “as big as a small mouse,” and which Bamforth characterized as “a full-flavored meat dish.” Grasshopper kebobs, anyone?
The beer won.

In his talk on "Adventures in Entomophagy: “Waiter, There's No Fly in My Soup!” Gordon said that 80 percent of the world's culture eat bugs and two-thirds of all animal species are insects. "Bug-eating is good for the planet. Bugs are nutritious, delicious, cheap and plentiful.”

“John the Baptist was the most famous bug eater,” Gordon said. “The Bible tells us he ate locusts and honey. Angelina Jolie is the second most famous bug-eater. And I'm third, the godfather of insect cuisine.”

“Whether a country eats bugs has a lot to do with dependence on agriculture,” Gordon said. “Insects are in direct competition with humans for food. But as the human population grows, we can't feed them all (what Americans are accustomed to eating). People are eating hamburgers when they should be eating bugs.” Master beekeeper and writer Mea McNeil of San Anselmo downs a bug.
Raising cows, pigs and sheep is a “tremendous waste of the planet's resources, but bug ranching is pretty benign,” Gordon  said. With cows, “it takes the equivalent of 16 pounds of grain and 2000 gallons of water to get one pound of steak." And the resulting greenhouse gases are not good for the planet, either, he pointed out.

“In our culture, bugs are often considered a novelty food, such as tequila-flavored lollipops,” the chef told the crowd.  However, cricket energy bars "have gone mainstream," and cookies made with cricket flour are becoming more and more popular.

“Insects are the food of the future,” Gordon declared.

He cautioned that all bugs should be cooked, as cooking kills any parasites.  Bug chefs must also take special precautions in preparing stinging arthropods.

He paused.  “How many of you take calcium pills? If your fingernails keep breaking, eat more crickets. They're rich in calcium. And how many of you are anemic? Termites are rich in iron.”

Food choice is just a matter of what we're accustomed to eating,” Gordon said.  He asked how many eat sushi (raw fish), pickled pig's feet, chicken eggs and lobster. “Lobster used to be served to inmates in prison on the East Coast. And talk about the all-time weird food--the chicken egg comes from the butt of a chicken."

You shouldn't eat  just any bug, Gordon said “You don't want to eat that cockroach that crawled under your refrigerator or a bug in the field sprayed with pesticides.” He advocates that “you raise your own insects under hygienic conditions or order bugs from supply companies.”

Gordon said it's only right—and it's justice--that we humans eat the pests that eat our food in our garden. Tomato hornworms, for one.  One of his recipes calls for tomato green hornworms, with olive oil, green tomatoes, pepper, white cornmeal and basil. Gordon said it's important to be environmentally friendly and not to use pesticides, especially if you're going to eat the pests.

Gordon said the key ingredients in his signature dish, “Orthopteran Orzo” (orzo is a rice-shaped pasta) are three-week old cricket nymphs. Gordon recalled serving the dish at one event and a young boy, a pre-teen, kept returning for more. “Don't they ever feed you at home?” Gordon asked him after the fourth helping. “But this is way better than anything my mom makes,” the boy said.

In his talk titled "Bugs Are No Strangers to Brewers," Bamforth discussed the intricacies of  beer brewing and why he paired certain beers with certain bug dishes. He also touched on beer preference:  what some people love, others may loathe. Bamforth likened some beers (not served at the event) as reminding him of “cat's breath, newly filled baby diapers, and wet horse blanket with mouse pee.” At one beer tasting, a beer reminded him of “a wet dog urinating in a telephone booth.”

Bamforth said bugs and beer go together in another way, but not a good way. A beer's key ingredient is a grain, and insects may contaminate them. For example, hop aphids may contaminate hops and the saw-toothed beetles, the rice. Grain contamination can also involve such organisms as bacteria, powdery mildew virus and fungi

Some of the entomophagists at the bug-beer fest jokingly inquired if the bugs displayed by the Bohart Museum of Entomology were for eating, as well as for viewing. Arachnids included  Tanzanian Giant Whipspider, Costa Rican Red Tarantula and Salmon Pink Bird-Eating Tarantula.

“No, they're not for eating,” said White, holding a millipede as people milled around him talking about Gordon's recipes, including “Superworm Tempura With Plum Dipping Sauce,” “Pest-O,” “Larval Latkes,” “Curried Termite Stew,”  “Cream of Katydid Soup,“ and "Ant Jemina's Buckwheat-Bug Griddlecakes.”

In fact, Gordon said millipedes are poisonous and should not be substituted for centipedes in recipes. He writes in his cookbook: "These animals (millipedes) secrete a foul-smelling fluid that, in some species, may contain traces of hydrogen cyanide--not good, unless you're from the Borgia household." 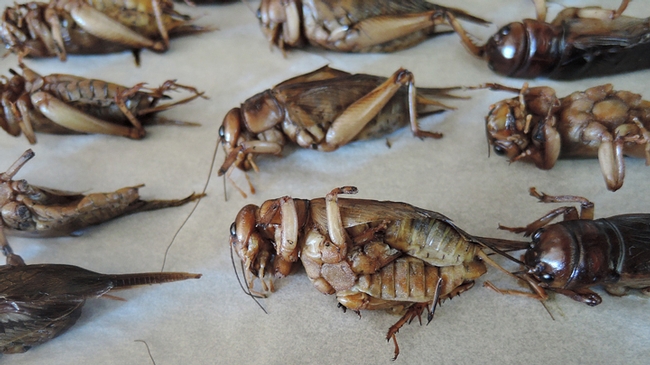 These Cambodiam crickets were described as a "fully flavored meat dish" the size of a small mouse. (Photos by Kathy Keatley Garvey) 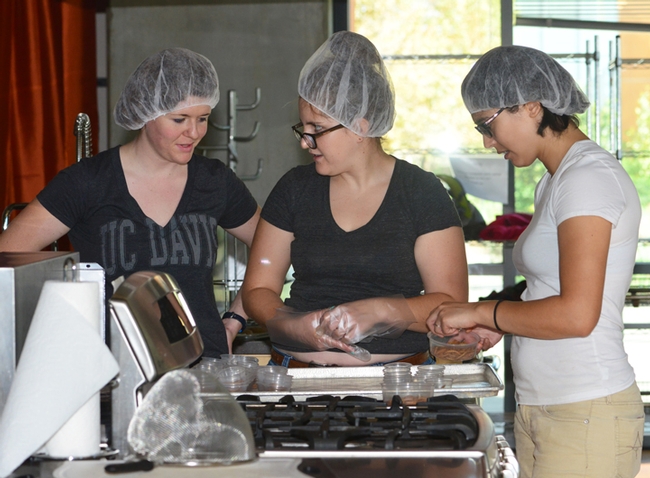 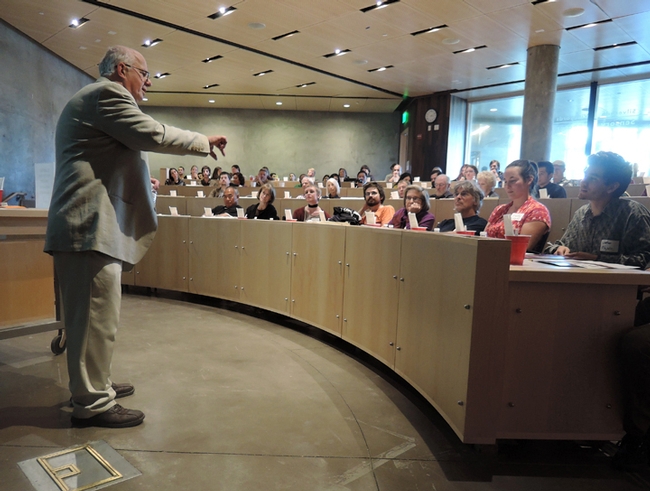 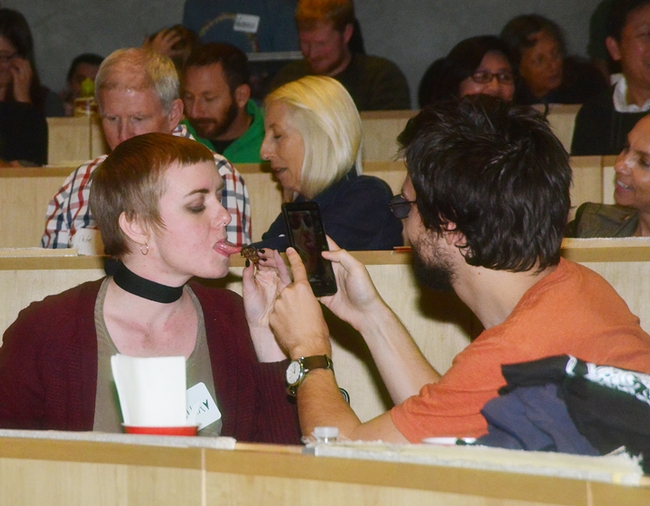 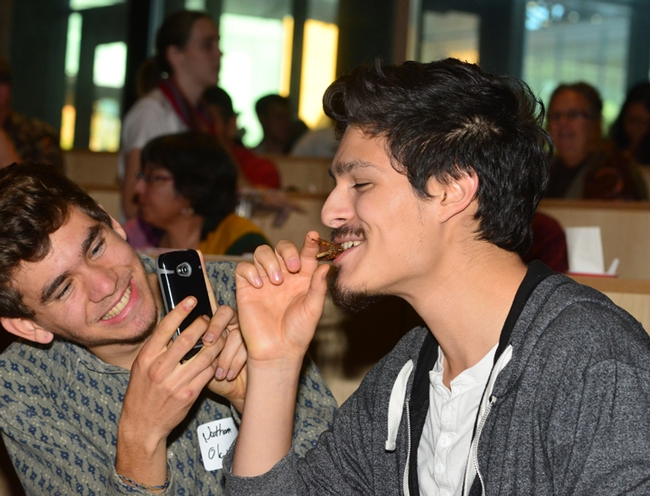 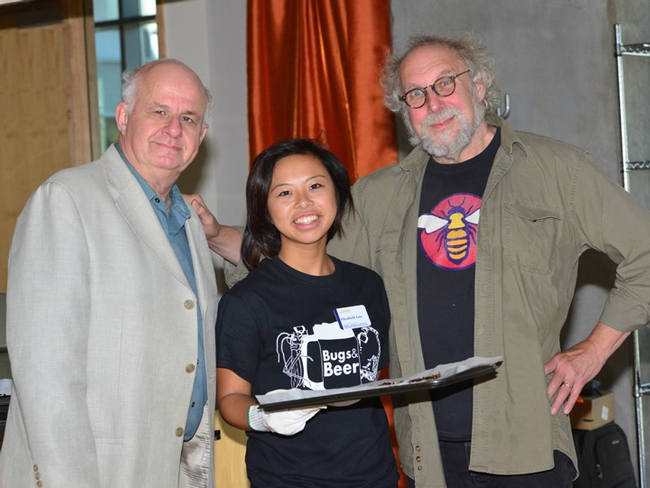 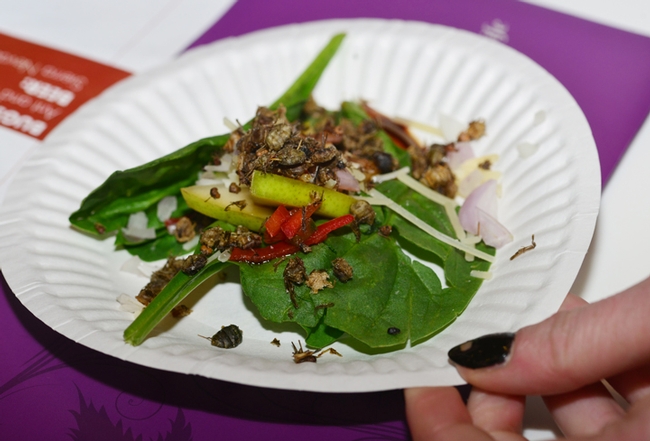