“My art is inspired by the harmony between nature and insects,” said Rice, a junior specialist in the Larry Godfrey lab, UC Davis Department of Entomology and Nematology. She studies the bagrada bug with postdoctoral fellow Ian Grettenberger.

“I am truly humbled by the complexity and beauty of many of them!” Rice said. “I'm captivated by insects' structural biology, ability to evolve over time and the intricate ways in which they communicate.”

The stag beetle t-shirt design not only incorporates her love for stag beetles (family Lucanidae) but illustrates the “geometric patterns that are hidden in the deciduous forests they dwell in,” said Rice, who enjoys fuses art with science..

Stag beetles are so named because of the males' unique mandibles, often compared to deer antlers. The beetles are ground-dwellers but also can fly. Some males measure 7 centimeters in length or just under three inches, while the adult females are about 5 centimeters long.

A native of Roseville, Rice received her bachelor's degree in biological sciences with a minor in medical-veterinary entomology in March 2015. Her career goal, to become a professional research entomologist, stems from her childhood interest in the biological sciences.

“This is a continuation of my experience as a researcher, teachers assistant, and mentor,” she said. “With the support of Dr. Larry Godfrey (Extension entomology, UC Davis Department of Entomology and Nematology), I have been motivated to pursue my Ph.D. I'm grateful for his commitment to fostering my intellectual growth, and dedication to mentoring a young woman scientist in a field where women are frequently underrepresented.”

“I'm particularly interested in integrated pest management practices that could have real world impact,” Rice said. “By understanding the biology and behaviors of pest insects, as well as their interaction with other organisms, the reliance on heavy pesticide use in agriculture may become minimized and more targeted. “

“Dr. Grettenberger has taught me how to manage time and stay organized in order to execute an effective research plan,” Rice said, “and I am inspired by his enthusiasm to solve problems.”\

Rice hopes to start graduate school in autumn of 2017. Meanwhile, she continues to share her fascination for insects with friends, family and the Davis community.

For several years, Rice was an active member of the UC Davis Entomology Club, advised by forensic entomologist Robert Kimsey of the UC Davis Department of Entomology and Nematology faculty. “I consider Bob Kimsey as my mentor and friend. Along with the various projects of the entomology club, he has instilled in me a deep curiosity of the natural world and a strong desire to give back to the community as an entomologist.”

Rice's award-winning t-shirt went on sale at the Entomological Society of America/International Congress of Entomology meeting, held in early November in Orlando, Fla.

Cindy Preto of the Frank Zalom lab is coordinating the sale of the t-shirts. All proceeds benefit EGSA. 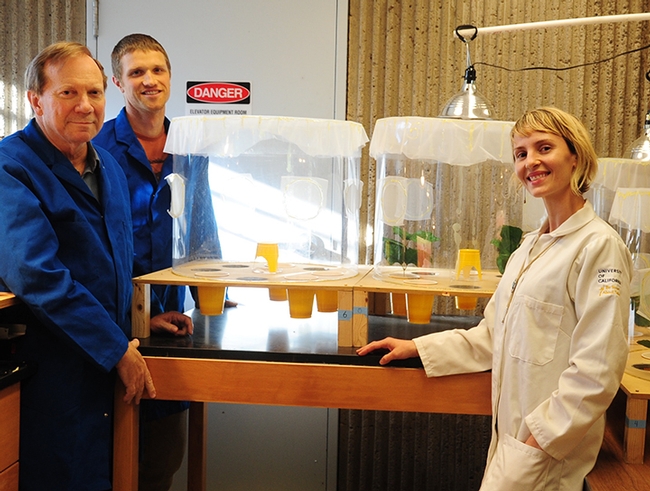