Entomology & Nematology News
sitenum=270
UC News about Entomology and Nematology.
Defensive Bees Are All the Buzz: UC Davis Experts Weigh In
Published on: May 19, 2016

(Editor's Note: An update: The results of the CDFA analysis have been announced.  The maternal lineage of the problematic colony in Concord was European. "Therefore, if that queen's daughters were acting in a very Africanized manner, it might have been because she mated with Africanized drones in the area," said Extension apiculturist emeritus Eric Mussen, "or because there are a number of drones from European cantankerous colonies around the area.  The paternity tests were not run.")

The three-day incident began Friday, May 13, and primarily ended on Sunday, when many of the bees were destroyed. What happened: A beekeeper on Hitchcock Road was moving his two hives to make way for landscaping in his yard. He moved the first hive successfully, but the bees in the second hive turned defensive, killing two dogs, attacking a mail carrier, and targeting numerous passersby.

DNA tests are underway to see if the bees are Africanized. “Their behavior is very suggestive that they could be Africanized,” Mussen said.

Niño, who joined the UC Davis Department of Entomology and Nematology in September 2014, replacing Mussen, was interviewed by the Associated Press, San Francisco and Kathy Park of KXTV Channel 10 and Tom Jensen of KCRA Channel 3. More interviews are pending.

Mussen, who completed a 38-year career in 2014 and now serves as emeritus, was quoted in the San Francisco Chronicle and in other news media.

Niño told KCRA "Africanized honey bees tend to be more defensive, they amount a stronger defensive response. First of all, we don't like to call them killer bees. That's definitely not what they're there for. They're not coming at you for no reason."

Mussen told the San Francisco Chronicle that attempts to avoid the bees may have actually made things worse. Waving arms and swatting motions can provoke bees to sting — and then the stings themselves act as markers for other bees to target, he said.

Africanized bees are a hybrid of African honey bees and European/Western honey bees. In the 1950s, Brazilian scientists exported bees from South Africa to improve breeding stock and increase honey production. However the bees escaped quarantine and began mating with European honey bees. Since they they have spread throughout South and Central America and arrived in North America in 1985. Africanized bees expanded into southern California in 1994.

In appearance, Africanized bees and European honey bees look alike and cannot be distinguished except through DNA tests, Niño and Mussen said.

Mussen says that we have three ways to try to differentiate between Africanized honey bees (AHBs) and European honey bees (EHBs):

“Yes, EHB colonies can behave in that nasty manner, but I think it is more likely that AHBs are involved,” Mussen says.  He recalled that twice in the 1980s, swarms of bees from South America accompanied shipments of raw sugar cane into the C&H sugar refinery in Crockett (Contra Costa County). We know the first one got away.  They think they got the second one, but could not find the queen in either case.    Since that time, there have been increasing complaints of 'hot' bees from that area, south to Castro Valley (Alameda County).”

Assistant professor Brian Johnson of the UC Davis Department of Entomology and Nematology, is doing research on  genetic dispersion of AHBs around the state. He is collecting and freezing samples. 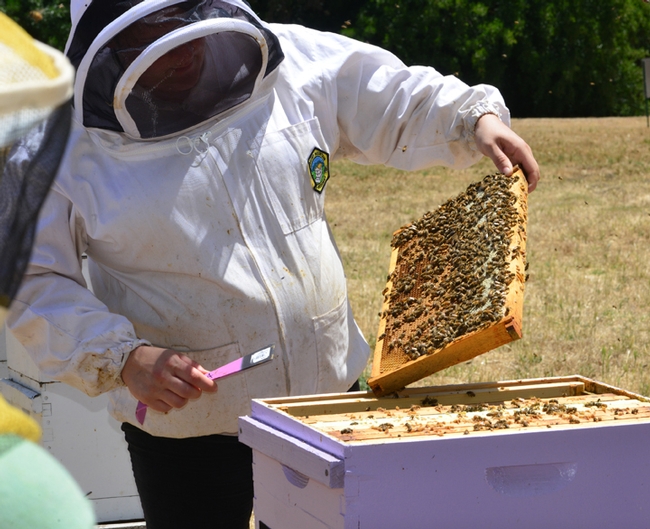 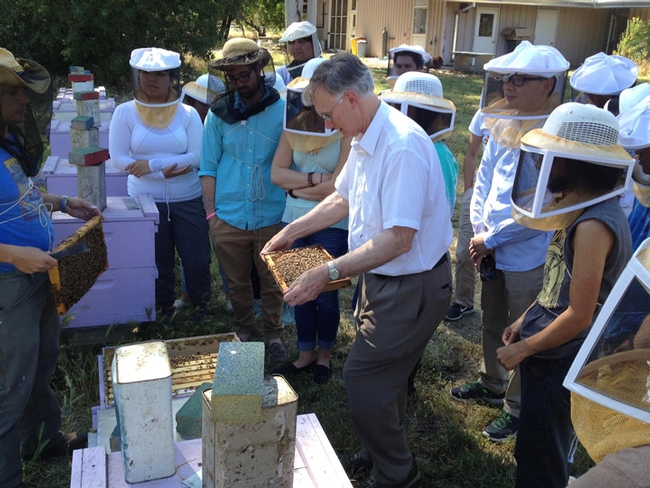