Nematologist/parasitologist Lauren Camp of UC Davis will present the Science Night Live program on “Nematode Need-to-Know: Roundworms Are All Around You” at 6 p.m., Wednesday, Feb. 1 in the World of Wonders (WOW) Science Museum, 2 North Sacramento St., Lodi.

The two-hour event, free and open to the public, is billed as a “conversation with the parasitologist.” Beverages will be available, and a food truck will be on site.

“Nematodes are an amazing phylum of organisms--they exist in almost every known environment on the planet, and different species eat everything from bacteria and fungi to plant and animal tissue," Camp said. "I find parasites particularly fascinating, because they are dependent on another organism (or organisms) for part or all of their life cycle."

The nematodes shown Feb. 1 will range in size from less than one millimeter to eight meters long or 30 feet.

Camp received her doctorate in December 2016, studying with major professor Steve Nadler, professor and chair of the UC Davis Department of Entomology and Nematology.

Camp, from rural northern Indiana, obtained her bachelor's degree in biology from the University of Chicago in 2005 and her master's degree in biology from Wake Forest University in 2007. As a graduate student at UC Davis, she focused her work on the evolutionary relationships and genetic diversity of Baylisascaris procyonis, a nematode parasite of raccoons. Her career plans: a researcher in infectious diseases or genetics/genomics or as a science communicator.

"I first became interested in parasites during my undergrad degree at the University of Chicago," she said. "My specific interest in nematode parasites developed when I read some of Dr. Nadler's work on the evolutionary relationships of nematodes for an invertebrate biology class." 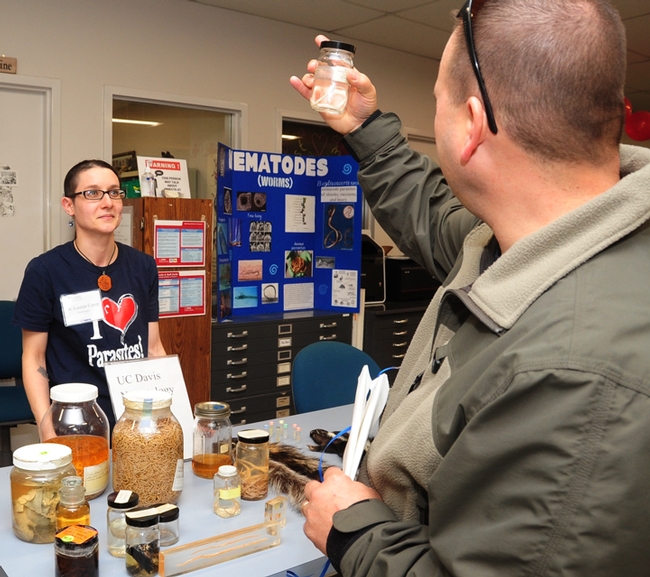