Rick LoPresti
If you've ever tried to eat a roasted marshmallow dropped in the sand, you probably said “Yecch!” and threw it away.

Now UC Davis researchers have found that some plants excrete a stickylike glue to entrap sand so predators won't eat them.

Sand entrapment on plant surfaces is called psammophory or sand armor, they said in newly published research in the journal Ecology.

Thus, herbivores like rabbits and bison, avoid eating them. “Sand and soil are nonnutritive and difficult for herbivores to process, as well as visually identical to the background,” they wrote in their abstract. Rick Karban
They describe it as a “phylogenetically and geographically widespread trait.” Globally, more than 200 species of plants excrete a substance cover themselves in sand, something that scientists don't fully understand. Some think it's a means to trap water and protect from the elements.

LoPresti and Karban set out to investigate whether the sand-coating serves as a camouflage or a shield from predators or both.

“We experimentally investigated whether this sand coating physically protected the plant from herbivores or increased crypsis (or the ability of an animal to avoid observation or detection),” they said. “We tested the former hypothesis by removing entrapped sand from stems, petioles, and leaves of the sand verbena Abronia latifolia and by supplementing natural sand levels in the honeyscented pincushion plant Navarretia mellita. Consistent with a physical defensive function, leaves with sand present or supplemented suffered less chewing herbivory than those with sand removed or left as is.”

They tested the “possible crypsis effect” by coating some sand verbena stems with green sand, matching the stem color, as well as others with brown sand to match the background color. “Both suffered less chewing herbivory than controls with no sand and herbivory did not significantly differ between the colors, suggesting crypsis was not the driving resistance mechanism.”

Since their paper's online publication, the work has been featured in Newsweek, Discover and on CBC Radio. 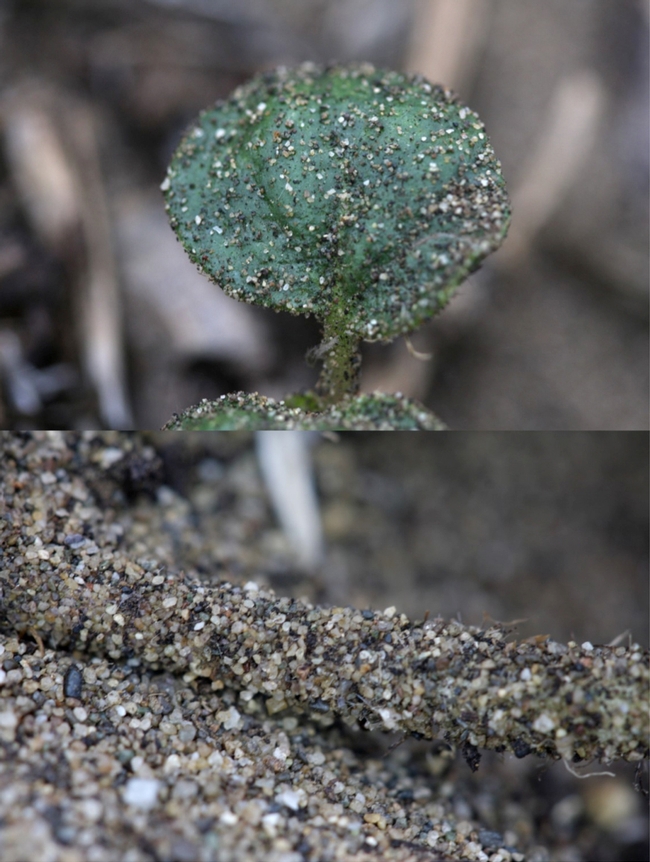