Close-up of walnut twig beetle. (Photo by Kathy Keatley Garvey)
DAVIS--Two entomologists affiliated with the University of California, Davis, have published groundbreaking research on the seasonal flight behavior of the walnut twig beetle, which spreads a deadly fungal disease in black walnut and other walnut trees. The research may lead to better control of the disease, now found throughout much of the United States.

Yigen Chen and Steve Seybold continually trapped the reddish-brown insect, about a third of the size of a grain of rice, for three years along Putah Creek in Davis, Calif., and recorded its daily and seasonal flight behavior. They lured the insect into the traps with a synthetic version of its aggregation pheromone.

“We discovered the collective and interactive effects of four environmental factors on the crepuscular (twilight) flight behavior of the insect,” said lead author Chen, a research entomologist and project scientist with the UC Davis Department of Entomology and Nematology. “We found that the optimal trapping conditions are a combination of moderate to warm temperatures, around 79 to 81 Fahrenheit; low light intensity; low wind speed, 0.6 to 2.5 miles per hour; and moderate barometric pressure, 755 to 757.”

“Understanding the walnut twig beetle's seasonal flight cycle and factors that govern its flight are critical first steps in the early detection of invasive species prior to implementing pest eradication or integrated pest management (IPM) programs,” they wrote in their research article, “Crepuscular Flight Activity of an Invasive Insect Governed by Interacting Abiotic Factors,”published in the Aug. 26 edition of the Public Library of Science, PLOS ONE. Steve Seybold
By itself the tiny walnut twig beetle, Pityophthorus juglandis, does little to walnut trees, said Seybold, who is with the USDA Forest Service Pacific Southwest Research Station in Davis, and is an affiliate of the UC Davis Department of Entomology and Nematology.

As the disease advances, the health of the tree declines and eventually it dies, sometimes within a three-year period, said Seybold, who has been studying the beetle and the newly discovered fungus with its barrel-shaped spores since 2008.

When male beetles initiate new galleries, they produce an aggregation pheromone. As the population increases, the flight response of males and females similarly increases.

Mating disruption or interruption of insect aggregation is crucial to controlling such insect pests as the walnut twig beetle in IPM programs, the entomologists pointed out. “Understanding the interactions among abiotic environmental factors on flight activity, should increase the efficacy of these methods in a specific IPM program to control the beetle,” Chen said. Black walnut tree with early stages of thousand cankers disease. (Photo by Steve Seybold)
The scientists divided the seasonal flight into three phases: emergence, January –March; primary flight, May-July; and secondary fight, September-October. They discovered that the seasonal flight response to the male-produced aggregation pheromone was consistently female-biased (mean of 58.9 percent females). During the spring and summer months (May to September),diurnal or daily flight followed a bimodal pattern with a minor peak in mid-morning and a major peak at dusk (76.4 percent caught between 1800 and 2200 h).

“The primarily crepuscular flight activity had a Gaussian relationship with ambient temperature and barometric pressure but a negative exponential relationship with increasing light intensity and wind speed,” they wrote in their abstract. “A model selection procedure indicated that the four abiotic factors collectively and interactively governed P. juglandis diurnal flight.”

New knowledge of the primary periods of seasonal flight (May‒July and September‒October) “provides some guidance for when semiochemical-based interruption of aggregation may be applied most efficaciously,” they said..

Late in the summer of 2011, the team demonstrated the efficacy of the pheromone as a flight trap bait. The bait lures both male and female beetles into a small plastic funnel trap.

The walnut twig beetle, native to the southwestern United States and Mexico, and widely distributed in Colorado, Arizona, California, and New Mexico, has now been detected throughout much of the United States: in nine western and five eastern states. In 2013, it was reported in northern Italy.

The earliest symptom of thousand cankers disease is yellowing foliage that progresses rapidly to brown wilted foliage, then finally branch mortality. Branch mortality and decline of the tree crown are one of three major symptoms of thousand cankers disease. The others are numerous small cankers on branches and the trunk, and holes and other evidence of tiny bark beetles. 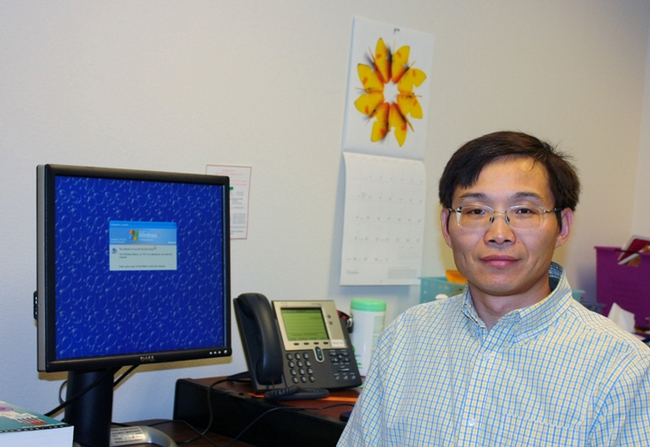