Declining profits from most agricultural crops grown combined with increasing restrictions on water use have forced many Southern California farmers to look for more water efficient and profitable crop alternatives to diversify their farming operations. Pitahaya or Dragon Fruit (Hylocereus spp.) meets these requirements and has emerged as a viable crop alternative with great profit potential for small-scale agricultural producers in the region.

Pitahaya is a vining cactus that adapts very well to arid southern California micro-climates and can survive with minimal amounts of water. Its fruit is highly prized by Southeast Asian consumers not only as a fresh fruit but also for its cultural importance. However, market trends and increasing demand for new, exotic and more nutritious fruits have increased the appeal of this fruit among mainstream American consumers and the demand currently exceeds the domestic supply. Most pitahaya consumed in the US has been traditionally imported from Southeast Asia with limited domestic production from Florida and California. However, most of this fruit has been from white-fleshed cultivars of Asian origin, which rarely met consumers' flavor expectations based on the fruit's exotic appearance.

Recognizing that more research-based information and tastier, more colorful varieties were needed to increase consumer demand and to help growers capitalize on this opportunity, UCCE Small Farm Advisor Ramiro Lobo initiated a pitahaya research and extension program with seed money from the former UC Small Farm Program. Subsequent grants from UC-ANR and from the UC Hansen Trust have allowed Farm Advisor Lobo to expand the geographic scope of this program into Riverside and Ventura Counties in collaboration with Jose Fernandez de Soto, Jose Aguiar, other Advisors and Specialists from UC Davis and UC Riverside and private growers and suppliers.

Research efforts to date have focused on the evaluation of pitahaya cultivars for adaptation to local micro-climates, the genetic characterization of a pitahaya germplasm collection, pest and disease management, irrigation and fertility management and post harvest management information. This research has demonstrated that pitahaya or dragon fruit adapts very well to field grown conditions in Southern California and that this drought-tolerant plant can be a profitable crop alternative for small-scale producers in Southern Coastal California.

If you are interested in learning more about pitahaya, you may want to attend one of these upcoming events. The Field Day in Ventura County will begin with a tour of field research trials at MVP Farms in Fillmore, followed by presentations, lunch and pitahaya fruit and ice cream tasting at the UC Hansen Agricultural Center in Santa Paula. Field discussion and presentations will focus on varieties, irrigation system design and requirements, fertility management, trellising systems, pest and disease prevention and management, insect pest management, nematode management and pitahaya establishment coast and marketing considerations. You may register online or download the agenda and more details for the upcoming field day in Santa Paula at:

A shorter program in Indio, Riverside County will be presented on Wednesday, September 30 beginning at 10:30AM. To register for this event, contact Wendy Smith at 760 342 6437 or wensmith@ucanr.edu. 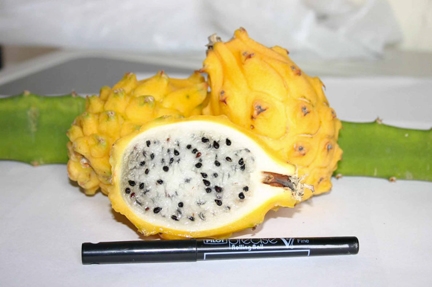 Each color in this rainbow's array of carrots is actually a different variety of carrot. Photo by Manuel Jimenez.

While growing vegetables for the Great Veggie Adventure, at least one California farm found a new product to sell at its farmers market booths.

Ramiro Lobo
"We don't have a research station here in San Diego or close by, so they've allowed us to do research on their farm. That's been invaluable," Lobo said.

Lobo worked with the farm to have a demonstration plot of rainbow-colored carrots, party-hued cauliflower, watermelon radishes and Romanesco as part of the UC Small Farm Program's work with the Great Veggie Adventure.

"After I had the samples I needed, I told them they could pick and pack the vegetables. They bunched all the different colors of carrots together," Lobo said. "I heard chefs in Los Angeles and Santa Monica markets wanted them, so they planted more."

Javier Valdivia, a supervisor at his father's farm, called the multi-colored bunches of carrots a "hot item." Some colorful carrot varieties are a single color, while others are still orange on the inside.
"Chefs and other customers really dig them because they add color to their plates," he said. "The carrots were pretty popular, and they were selling out at the farmers markets. So we just continued with them."

He said they're still growing the purple, red, yellow and white carrot varieties, which can be grown almost year-round in the San Diego region.

Valdivia Farms sells at farmers markets seven days a week in San Diego, Los Angeles and Orange counties. In addition to selling their specialty items at about two dozen farmers markets, they also sell wholesale and from a produce stand on the farm.

Lobo has been working with Valdivia Farms for about 12 years, growing trials there (blueberries, blackberries, dragon fruit, miniature melons) and sometimes answering their agricultural business questions.

"It pays for some of these farmers to try out new products. You never know what's going to spark interest," Lobo said. "Don't be afraid to try new things in small quantities and bring it to market."