Although the outbreak earlier this month of E. coli O145 in shredded Romaine lettuce hasn’t touched California consumers and local retailers, it is impacting the industry. Once again, the safety of pre-washed and cut leafy vegetables are in headlines, raising the fears of consumers and producers alike.

The Centers for Disease Control have confirmed 23 illnesses and 7 probable illnesses in New York, Michigan, Ohio and Tennessee from the contaminated lettuce. The traceback investigation is stretching west to Yuma, Ariz., where the lettuce may have been grown. So far, the source of the contamination has not been identified.

A source of confusion and alarm, however, is the contaminant’s O145 designation. For the past 30 years, the majority of the E. coli illness outbreaks in America were serotype O157:H7. UC Davis Cooperative Extension produce safety specialist Trevor Suslow said E. coli O145 doesn’t come completely out of the blue. O145 is recognized in its association with food in other countries and more often with animal products, not produce.

Suslow and his staff were well aware of E. coli O145 prior to this month’s outbreak and included it in their recent research aimed at development of a new method for detecting a broad range of the most dangerous E. coli bacteria in produce and produce production environments.

The new test was not designed to identify a particular strain of E. coli, but to determine whether a pathogenic/toxigenic strain of E. coli – such as O145 – is present. If the test comes up positive, a secondary test can be conducted to narrow down the specific type of E.coli.

Pathogenic/toxigenic E. coli are of tremendous concern for the fresh produce industry. “Generic” E. coli live in the guts of most mammals; they are typically harmless and may even be beneficial. However, pathogenic/toxigenic E. coli, when ingested by humans, can cause bloody diarrhea and, particularly in the very young and very old, may lead to kidney failure and even death.

“With all those materials, we had very good effectiveness, but especially with water and produce,” Suslow said.

For more information or to register for the symposium, see the Center for Produce Safety website at http://cps.ucdavis.edu. 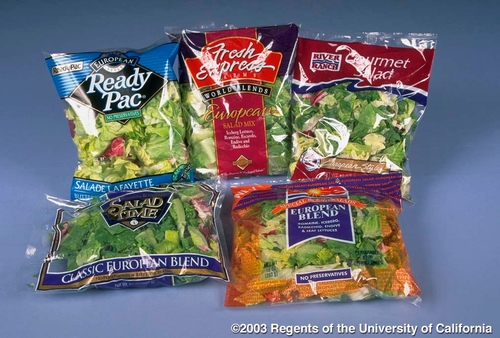 Bagged lettuce was implicated in a recent food safety outbreak.

There's more to fruit and vegetable quality than meets the eye

Farmers markets and produce stands are starting to bulge with the bounty of California's fields as strawberries, artichokes and asparagus mark the start of the spring and summer produce seasons.

These and many more questions are answered in the colorful handbook:  From the Farm to Your Table:  A Consumer's Guide to Fresh Fruits and Vegetables available at anrcatalog.ucdavis.edu This guide contains tips from the pros on selection, storage and handling for quality and safety. Handy tables show you which fruits and vegetables should be stored in the refrigerator, which should be stored on the counter, and what to look for when selecting popular produce items. And if you've ever wondered the steps your produce takes to get from the field to your market, the journey is explained here.

After reading this guide you'll know why there's more to fruit and vegetable quality than meets the eye.

Oh, and the answers to those questions?

Your refrigerator has separate bins so you can keep keep ethylene-producing fruits such as apples, peaches and pears away from vegetables.

Uncut tomatoes should be stored on the counter, not in the refrigerator.

And keep your basil fresh by treating it like cut flowers; place the stems in a glass of water on the counter until you're ready to use it. Part of our mission at the Agricultural Sustainability Institute at UC Davis is to ensure access to healthy food. So we’ve focused much of our work on the intersection between agriculture and human nutrition.

An interesting new field of study in this area looks at flavonoids, which are compounds in fruits and vegetables thought to have beneficial antioxidant effects and other medicinal value – they may even help reduce cancer risk.
Measuring the amount of flavonoids is one way we can figure out just how nutritious the food we’re eating really is.

At our Russell Ranch Sustainable Agriculture Facility, UC Davis Food Science professor Alyson Mitchell has looked at the relative nutrition of organic and conventional tomatoes by measuring flavonoid levels in samples from dried tomatoes over a 10-year period. These results suggest that over-fertilization can result in lower flavonoid content – and a reduction in the health benefits of tomatoes. You can find out more about this research here.

Catechins are phytochemical compounds found in plant-based foods and beverages. Consumption of catechins has been associated with a variety of beneficial effects including: ability of plasma to scavenge free radicals, blood vessel expansion, fat oxidation and more.

High concentrations of these helpful compounds can be found in many foods and beverages including: red wine, broad beans, black grapes, apricots, strawberries, apples, cherries, pears, raspberries, chocolate and both black and green tea.