An article printed yesterday in the Salinas Californian says 40 produce industry leaders, government representatives and other partners began to set the agenda for the new Center for Produce Safety at UC Davis on "Tuesday," which I assume means last Tuesday, June 12. The establishment of the $4.65 million Center for Produce Safety was announced in a UC Davis news service press release on April 11. UC ANR is a partner in the new center and contributed $150,000 to fund educational outreach programs for fresh produce.

According to the Californian article, the primary purpose of the recent meeting was to identify and define strategy and organizational principles for the new center.

"The outcome of the meeting included an agressive agenda and timeline including appointing an advisory board by July 30 and selecting an executive director within 90 days," said the article, which was attributed to "staff report."

The peripheral canal is in the news . . . again.

The peripheral canal has been on the backburner for decades, but a comment by Governor Arnold Schwarzenegger last week in Bakersfield has the media buzzing. According to the California Progress Report, Schwarzenegger said, "We need more water. We need more storage. We need to build more storage, and we have to build conveyance, the canal, all of those kinds of things."

Even on the UC Water Resources Center Web site, the controversy over the peripheral canal gets mention only in an article about an oral history collection (see Page 8 of the Summer 2000 Currents newsletter.)

Resurrecting the peripheral canal means a renewed need for unbiased, science-based information about California's agricultural water needs and usage, a topic about which UC ANR has much expertise.

The Western Farm Press yesterday picked up a news release by John Stumbos, senior writer for the UC Davis College of Agricultural and Environmental Sciences. The news release covered a tour June 4-6 in Davis that included CAES dean Neal Van Alfen and CDFA secretary A.G. Kawamura. They and 10 additional dignitaries -- from Canada, France and the United Kingdom -- were learning about bio-energy from agriculture and plant collections at UC Davis managed by USDA. Van Alfen and Kawamura spoke at a dinner for the visitors at USDA's Western Human Nutrition Research Center.

"We see that agriculture and food issues are going to be driven heavily and highly by the consumers much more in the future than they have been in the past," Van Alfen is quoted in the article. "The thing that is of most interest to consumers today is health."

The article says that Kawamura mentioned the importance of supporting research on invasive species and adjusting to global climate change.

"Unpredictable weather means unpredictable harvests," he is quoted. "We're going to need the research to help us have the tools to deal with adaptation at its most critical level because we don't have the luxury to make a lot of mistakes globally in the way we deal with agriculture."

Farm advisors are go-to people for the press.

"Of course, it's that controlled environment that's nice," he is quoted. "And you can really extend your season - grow into the winter months. Those are the main reasons."

"Pest management can be difficult. You have to be 'Johnny on the Spot' and catch things," Stoddard is quoted in the article.

The second north valley story appeared in yesterday's Stockton Record. By longtime ag reporter Reed Fujii, the story is written in response to a series of newspaper ads asking Lodi-area growers to consider replacing their vineyards with olives. The article doesn't say whether it was the Lodi Farming Company that placed the ads, but it does quote the president of the organization, Jeff Colombini, extensively.

"There's 70 million gallons of olive oil consumed in this country and 99.5 percent are produced outside the country," said Colombini, according to the article.

For this story, Fujii sought comment from UCCE's resident olive oil expert Paul Vossen of Sonoma County. Vossen feels California growers can compete in the global market in olive production. He compared it to the success the state's growers have had with almonds.

"Spain was the No. 1 producer of almonds in the world, and all of a suden here comes California," he is quoted in the article. "Why is that? It's all mechanical."

Olives growing in super-high-density orchards can be similarly automated, Vossen told the newspaper.

The image of Western cowboys herding cattle on horseback with their well-trained dogs may become a romantic visage of the past. Today, many ranchers are getting around on all-terrain vehicles (ATVs). AgAlert reporter Kathy Coatney wrote two articles on ATV use for the June 6 issue, one noting the increased popularity of ATVs among cattle ranchers and the other about growing ATV safety concerns. She sought comment from UC ANR experts for both. (AgAlert posts only selected stories on its Web site and these are not among them. They are only available in the newspaper.)

Coatney spoke to Glen Nader, the UC Cooperative Extension livestock advisor for Butte, Sutter and Yuba counties, who said ATVs can cover more country much faster than a horse -- without needing rest. They save both time and labor.

On the down side, ATVs sent 136,000 Americans to emergency rooms in 2004, according to statistics Coatney gave from the U.S. Consumer Product Safety Commission. Coatney went to the director of the Western Center for Agriculltural Health and Safety at UC Davis, Mark Schenker, for comment.

"We certainly are seeing more injuries and fatalities," he was quoted in the article. "Those have been going up (in all ATV use). I think that's a red flag that attention is needed."

"For head injuuries, helmets would reduce the risk (of injury) by 64 percent, and they reduce the risk of death by 42 percent. Those are pretty significant," Schenker is quoted. 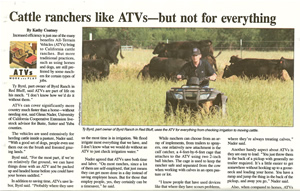