Pollinators are in the news

The insects and animals that bustle from blossom to blossom collecting food while inadvertently pollinating plants are responsible for helping produce some of the healthiest food on the planet. Any threat to pollinators, therefore, is a threat to human health, according to a study published this week in the online journal PLoS ONE.

The study was carried out by an international team that included scientists from UC Berkeley and UC San Francisco. It stemmed from a working group at UC Santa Barbara's National Center for Ecological Analysis and Synthesis, said a UCSB news release.

The research team showed that, globally, "animal-pollinated crops contain the majority of the available dietary lipid, vitamin A, C, and E, and a large portion of the minerals calcium, fluoride, and iron worldwide. The yield increase attributable to animal-dependent pollination of these crops is significant and could have a potentially drastic effect on human nutrition if jeopardized," the release said.

This isn't the only news about the animals that pollinate crops important to the human food supply. In the UC Green Blog yesterday, UC Berkeley writer Ann Guy reported that a UC Berkeley study credited wild bee species with pollinating California crops to the tune of $937 million to $2.4 billion per year. Many of those pollinators are wild bees that live on rangelands – chiefly ranches that graze cattle.

"As it turns out, the farmer and the cowman should be friends," wrote Guy, quoting lyrics from the classic "Oklahoma!" song.

Non-native species, many that serve as hard-working pollinators, were also lauded in a news release distributed this week by writer Kathy Keatley Garvey of the UC Davis Department of Entomology. The release was based on a recent article, published in the journal Nature, titled “Don’t Judge Species on Their Origins." The garden-variety honeybee is a non-native species in the United States.

“Nativeness is not a sign of evolutionary fitness or of a species having positive effects,” the journal article says. 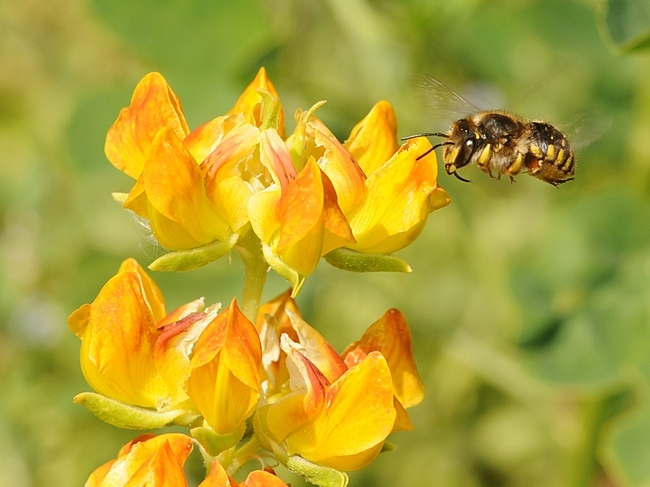