“Optimizing Yield and Quality in Irrigated Forages” will be the focus of discussion at the 2019 Western Alfalfa & Forage Symposium. More than 550 people are registered for the symposium, which will be held Nov. 19-21 at the Grand Sierra Hotel in Reno, Nev.

Irrigation management, forage quality and pest management are among the many topics that will be covered at the symposium. The comprehensive program features 62 speakers, 70 exhibitors, student poster sessions and an auction.

For a complete link to the program and registration/exhibitor information, please see the California Alfalfa & Forage Workgroup website at https://alfalfa.ucdavis.edu.

Here are some of the agenda highlights:

Day One – Tuesday, Nov. 19, FORAGE IRRIGATION WORKSHOP: This one-day workshop provides many of the basics of irrigation management for forage crops.

Day Three – Thursday, Nov. 21, MAIN SESSION-FORAGE QUALITY MINI-SYMPOSIUM This is an event co-sponsored by the NIRS consortium and the Forage Testing Association

See the complete program at https://alfalfa.ucdavis.edu. Register for the program, hotel and exhibitors at http://calhay.org/symposium. Continuing education units will be provided (24 units CCA, 3 units PCA). The research project is part of a two-location study, one at the UC West Side Research and Extension Center (WSREC) in Five Points, in western Fresno County, and an identical companion study at the UC Davis farm headed by UC Cooperative Extension specialist Dan Putnam and UC Davis professor and plant breeder Charles Brummer. These initial studies included a planting density by variety trial and a breeding observation block representing a wide range of genetics. The research was launched mid-summer this year after the 2018 Farm Bill declared that hemp should no longer be considered a controlled substance, but rather an agricultural commodity.

Industrial hemp can be produced for grain and fiber, however, many growers currently consider the most profitable component of the crop to be cannabidiol, or CBD, and related compounds. CBD is valued for its purported health benefits. It is said to reduce inflammation, pain, nausea, depression and anxiety, among other conditions.

Hutmacher said he and colleagues around the state are interested in learning about industrial hemp production opportunities, and feel there is a place for UC ANR research to support the fledgling industry. Already, there are some observations coming out of these small trials.

“Some people believe that hemp is a pest- and disease-free plant. That's not what we found,” Hutmacher said. “In the absence of suitable measures for control, corn ear worms seemed to thrive in hemp, and did an astounding amount of damage to cultivars in our small plots.”

The scientists were forced to use a pesticide to control the pest and reduce damage to developing buds. The hemp produced in the trial will be destroyed after harvest data has been collected. The experience with corn ear worm and other pest issues demonstrate that pest control will require significant study, particularly if a goal is to produce the crop organically.

“Markets for some industrial hemp products may require low pesticide residues. If hemp is produced organically, some preliminary observations this year suggest farmers will have to put a big effort into pest and disease control,” he said. Hemp in breeding plots at UC Davis in late August 2019.

Plant breeding can be another area of UC research. Hemp's natural genetic variations produce plants that vary widely in growth habit, size, response to day length, and time to maturity. There are hemp cultivars that mature when the plant is 18 inches tall and others that shoot up 12 feet high at maturity. Hemp grown for CBD production from seed or as transplants can vary greatly in size and other characteristics, such as amount of branching and the number of flower structures per plant. Multiple plant and production system factors also will influence options for mechanical versus hand harvesting.

Another breeding concern for growers is producing a crop with economic levels of CBD or other compounds of commercial interest, while staying within regulatory limits for THC (tetrahydrocannabinol), the psychoactive compound found in marijuana, a related plant. According to the California Department of Food and Agriculture, an industrial hemp crop grown in the state may have no more than 0.3% THC when plant samples are analyzed.

“This will be a challenge for growers. You don't want to risk too high a THC level,” Hutmacher said. “Farmers must test to make sure THC is at a level to meet regulations. If it's too high, CDFA regulations would require the crop be destroyed.”

Research center locations stretch from Holtville, in the low desert at the California-Mexico border, to Tulelake, just south of the Oregon border. Other centers ideal to answer hemp research questions include the UC Davis campus, the Hopland REC in Mendocino County, the Hansen REC in Ventura County, and the South Coast REC in Orange County. “I think that's a big advantage if you don't have a lot of land,” the farmer said. “You can produce a tremendous amount of feed in a very, very small area with a very little amount of water.”

However, UC Cooperative Extension alfalfa specialist Dan Putnam noted in the story that the system may not pencil out.

"If you really apply a little bit of economics to it and animal nutrition to it, it doesn't appear quite as promising as one might think," Putnam said.

There is no question that animals find the sprouted barely delicious. Online videos show cattle and horses "gobbling up sprouted grain like a vegetarian at a salad bar," Putnam wrote in a 2013 blog post that asked Does hydroponic forage production make sense? Things are not always as they seem. Animal ration calculations are based on dry matter since water is provided separately.

Feeding sheep sprouted barley makes sense to Mario Daccarett, the owner of the Golden Valley Farm. He said cheese made from his sheep's creamy milk is sold in places like Whole Foods.

"They have our cheese there and they tell me that our Golden Ewe cheese is the best for grilled cheese sandwich ever, and they have over 500 different varieties of cheese there," Daccarett said.

The farmer feeds his sheep one part oats and hay and one part sprouted barley.

“You do the math and you say, 'Well, yeah, it might not work,' but once we started doing it we found out that sheep tend to eat less, more nutrition, more enzymes,” Daccarett said. “So they become more efficient.”

Drip irrigation in alfalfa cuts water use, but isn't for everybody

The drought is forcing farmers to reexamine the way they water their crops, but converting to drip irrigation in alfalfa is unlikely to be widely implemented, reported David Wagner on KPBS Radio News.

The drip irrigation system conserves water - almost by half, said farmer Jack Cato - but is expensive and requires regular maintenance. After six years, the drip system is yet to pay for itself.

"Drip irrigation is not the answer for everything," said Khaled Bali, irrigation advisor with UC Agriculture and Natural Resources (UC ANR). "I would not recommend switching every acre in the Imperial Valley to drip irrigation."

"Whatever farm starts doing this, he needs to take baby steps," Cato said. "It's not something you learn overnight, or in a book. You have to study your fields daily."

For more on water use and alfalfa, see Why alfalfa is the best crop to have in the drought by Daniel Putnam, UC ANR Cooperative Extension specialist based at UC Davis, in the Alfalfa & Forage Blog. 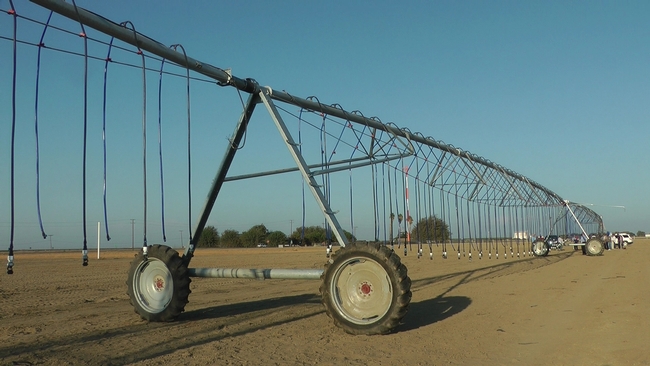 The center pivot system at the UC West Side Research and Extension Center before crops were planted.