The leafcutter bee is an efficient alfalfa pollinator

What makes leafcutter bees special? It's their innate ability to 'trip' alfalfa flowers, which is beautifully explained and shown - in slow motion - in the Deep Look video.

Cutters were “game changers” in the alfalfa seed business because they're much better at pollinating alfalfa than honeybees, Mueller said. Cutters trip 80 percent of flowers they visit, compared to honeybees, which only trip about 10 percent.

Leafcutting bees pollinate alfalfa, allowing the plants to form seeds. The seeds will be grown to make nutritious hay for dairy cows, giving credit to leafcutter bees' for their labor on the first step to making ice cream. California-grown alfalfa seed – a crop valued at nearly $1 billion annually – is shipped around the globe, where farmers use it to grow high-quality hay for dairy cows, horses, beef cattle and other livestock.

“Words cannot express the gratitude the industry has for Shannon,” said JD Allen, manager of the Alfalfa Seed Production Research Board. “Her incredible dedication and commitment to the alfalfa seed industry over the years manifested itself in many ways.”

Mueller, who earned a bachelor's degree in plant science at UC Riverside, worked on alfalfa during her studies at Cornell University, where she completed a master's degree and Ph.D. She was educated about alfalfa seed production by expert farmers producing the crop in Fresno County.

Information is widely available to guide production decisions for alfalfa hay, but seed production is more complicated. There is a delicate balance to achieve with irrigation, pest management and pollination. All factors influence each other.

“If you don't align the variables, there are real consequences in terms of yield and seed quality,” Mueller said.

“Shannon Mueller was a strong advocate for California alfalfa seed producers," said Jonathan Reich, global alfalfa breeding lead at Alforex Seeds. "Throughout her career she engaged with alfalfa seed industry stakeholders to identify research priorities aimed to deliver solutions to problems which had the potential to improve productivity, profitability, and sustainability.”

Mueller said she valued the opportunity to choose her own academic path as a UC Cooperative Extension advisor and work on issues that were of importance to the industry.

“I was able to address critical matters, and make changes over time,” Mueller said. “What I started out doing bore little resemblance to my more recent research.”

In 2011, Mueller was named co-director of UC Cooperative Extension in Fresno and Madera counties with viticulture farm advisor Steven Vasquez. Two years later, after his departure, she took the reins herself.

“I've been lucky,” Mueller said. “We have very intelligent, hardworking academics, program professionals, nutrition educators and staff in Fresno and Madera. I've had the opportunity to learn about our nutrition, 4-H and Master Gardener programs. Along with our agriculture and natural resources programs, I see the tremendous value they bring to Cooperative Extension.”

The University of California has honored Mueller with emeritus status. She plans to focus on expanding the Davis-based California Master Beekeeper program to additional sites in San Diego and Fresno. The new program has received a start-up grant from UC Agriculture and Natural Resources and will begin training volunteers to disseminate science-based information about the importance of honey bees, preserving bee health and responsible beekeeping.

Mueller also plans to travel during retirement, beginning with a month-long trip to Ireland this summer. Upon her return, she plans to take up quilting, get back into painting, and spend more time in the Sierra Nevada. "I'm a very proud 4-H member, from 4th grade to early college, in beef, rocketry and sugar beet (projects)," Jacobsen said. "When we think of 4-H, it's just so much more than those projects. There are so many leadership opportunities for these kids."

"4-H has an emphasis on citizenship, leadership and learning life skills," Borba said. "We encourage youth to take on leadership responsibilities, where the older youth mentor the younger youth."

"In the San Joaquin Valley, 4-H is offered in the traditional mode, 4-H clubs, where volunteer leaders assist the youth in different programs. But we also have programs on military bases, active duty and national guard, and we have after-school programs where we teach the staff ... to provide 4-H programs after school."

Jacobsen interviewed Shanon Mueller, the director of UCCE in Fresno County, at the Garden of the Sun, a one-acre demonstration garden created and maintained by the UCCE Master Gardener program.

She explained the role of UCCE's farm advisors and nutrition educators.

"Farm advisors bring the research-based information to the county," Mueller said. "A lot of times we can't directly import that. We will adapt that research so it's locally relevant. We do research trials, demonstration trials. We have field days, workshops, meetings."

Mueller continued, "Our goal is to bring the most up-to-date information to growers on varieties, production practices, irrigation, pest management. Any component that relates to agriculture to make sure we keep our ag economy strong."

"They talk about good nutrition, physical activity and health issues in classrooms," Mueller said. "One of the fun activities they do is monthly tasting time. They will bring some product for the kids to taste in a comfortable environment. All the kids are tasting jicama, apricots or something they haven't tried before in hopes that they'll try it and like it and that their parents will buy it at the grocery store."

Valley's Gold is produced by the Fresno County Farm Bureau and appears on the local PBS affiliate, KVPT.

The ag education episode can also be viewed below. Borba's interview begins at 12:25 and Mueller's at 15:08. UCCE is a cooperative program involving the University of California, county government and the U.S. Department of Agriculture. A cut in the county portion of the budget prompted the move.

Although UCCE now has less space, the location offers myriad benefits. The building has on-site security for night meetings, something that was unavailable at the former location. UCCE has access to the UC Center’s large, state-of-the-art meeting facilities and ample parking.

Along with the move, UC Cooperative Extension is forming a partnership with Madera County.

“Our goal is to reduce the administrative footprint and put more resources into our programs,” Mueller said.

The University of California continues to make an investment in Fresno and Madera county UC Cooperative Extension programs, Mueller said.

Nut crop advisor Gurreet Brar joined the academic staff in February 2013. A new nutrition, family and consumer sciences advisor will be on the job in August. Recruitment will begin in the fall for a new small farms advisor to replace Richard Molinar, who retired in June. Other academic positions are being considered for recruitment over the next two years.

“We’re pleased that we are able to continue to build our academic staff,” Mueller said.

The Fresno County UCCE office also houses the UC CalFresh and other nutrition education programs, comprised of 25 educators and coordinators; a Master Gardener program manager; a small farms and specialty crops Hmong agricultural assistant; plus laboratory and administrative staff. A newly hired 4-H program representative joins the team at the end of July.

In all, the stolen bee colonies were worth about $120,000, according to an article in AgAlert.

"The good news is after some tips from other local beekeepers and some searching, we found the missing bees and called the local sheriff's department," beekeeper Brian Long was quoted in the AgAlert article. "We just got lucky and got enough tips that led us to the bees."

Beekeepers and farmers cannot afford the loss of any bees. Between February and March, California's 750,000 acres of almonds require an estimated 1.2 million bee colonies for pollination. UC Davis entomologist Eric Mussen told AgAlert reporter Christine Souza that strong colonies of bees may be scarce this season.

"Despite these problems, it seems that every year the lure of almond pollination fees entices enough beekeepers to bring their bees to California to meet the needs of the almond growers," Mussen said. 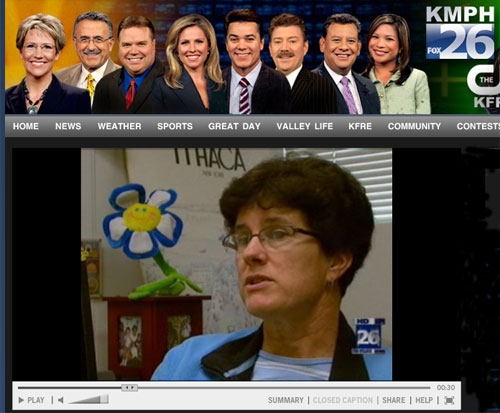