Red onions. Photo by Kathy Keatley Garvey
For crying out loud, who doesn't love an onion? Whether you enjoy them in burgers, broths, sandwiches or soups, or deep-fry them as onion rings or serve them with liver, they're to die for and to cry for.

The average American eats 21 pounds of onions per year. Indeed, our appetite for the fresh green as well as yellow, red, and white bulb onions is increasing in the United States, up 70 percent from several decades ago. A valued crop generating $1.2 billion a year, the onion currently ranks No. 2 in the vegetable industry, right behind the potato. Yellow onions account for nearly 90 percent of all onion consumption, followed by red and white varieties.

Onions, cultivated for more than 5,000 years, are one of the most versatile vegetables. They are found in every ethnic cuisine from breakfast to lunch to dinner and are rich in vitamin C and fiber. As Julia Child noted, “It's hard to imagine civilization without onions.”

With a thriving onion industry comes a “crying” need for onion seed planting stock; onions have to flower and set seed. California is a major worldwide supplier of onion seed, with growers producing about 3,000 acres of hybrid onion seed worth about $12 million, and generating an additional $40 million annually in subsequent retail sales. The major growing areas in our state are the Imperial Valley and Colusa County.

Seed companies from around the world contract with growers here in California to produce hybrid onion seed. The many different varieties include red, yellow and white bulbs, including types that are adapted to different day lengths from our northern to southern hemispheres. Growers plant onion bulbs or seedling transplants in late summer with distinct male (male fertile) and female (male sterile) onion lines in the same field. Generally, the field ratio is one row of males for every three female rows and they're tough to tell apart from a distance, but males produce pollen. Honey bees visiting an onion umbel. Photo by Kathy Keatley Garvey
In Northern California, flowering occurs for a short four to five weeks the following May and June, with scapes from each bulb producing a white umbel with multiple florets. Growers rely on honey bees for cross pollination, that is moving the pollen from male to female rows. Each acre usually includes 10 to 12 hives. Native bees are also important for pollinating onion flowers, as are flies. No pollinators? No onion seed production.

Thankfully, there are few pests of onion seed, although the recent introduction of the iris yellow spot virus vectored by the onion thrips has resulted in increased insecticide use to control this potentially devastating pest and disease. Recent research by UC Cooperative Extension specialists in Yolo County and UC Davis, however, documented that more than three insecticide sprays applied pre-bloom per year can reduce honey bee visitation to flowers. Insecticides may also interfere with the ability of female flowers to receive pollen; that is, sprays applied near to bloom time can lead to overall lower pollen germination. As a result, growers are now careful to minimize insecticide use in onion seed production fields to ensure good pollination and yields. After cross-pollination occurs and seeds are set, growers knock down the male rows to remove them to facilitate harvesting of female lines and ensure purity of the seed. Once the female umbels dry down, they are harvested primarily by hand, placed on tarps to fully dry, and then the tiny black seeds from the florets are mechanically threshed with a combine, and cleaned and packaged for retail sales.

Although a small acreage crop in California, onion seed is an important specialty crop that significantly boosts our agricultural economy, as well as providing needed seed for farmers throughout the world.

But, before you can slice them, chop them or dice them, you have to grow them and our California growers do it best.

Additional information on onion seed production can be found at: 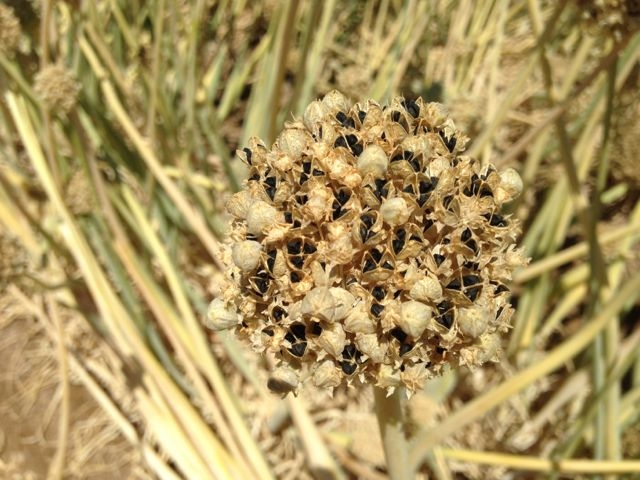