Using no-till and corn-soybean rotation practices in farm fields can significantly reduce field emissions of the greenhouse gas nitrous oxide, according to a Purdue University study.

Tony Vyn, a professor of agronomy, found that no-till reduces nitrous oxide emissions by 57 percent over chisel tilling, which mixes crop residue into surface soil, and 40 percent over moldboard tilling, which completely inverts soil as well as the majority of surface residue. Chisel plowing is the most widely used form of tilling before planting corn in Indiana, he said.

"There was a dramatic reduction simply because of the no-till," said Vyn, whose findings were published in the Soil Science Society of America Journal. "We think the soil disturbance and residue placement impacts of chisel plowing and moldboard plowing modify the soil physical and microbial environments such that more nitrous oxide is created and released."

During early season nitrogen fertilizer applications on corn, no-till may actually reduce nitrous oxide emissions from other forms of nitrogen present in, or resulting from, that fertilizer.

Nitrous oxide is the third-most abundant greenhouse gas in the atmosphere but, according to the U.S. Environmental Protection Agency, has about 310 times more heat-trapping power than carbon dioxide in part because of its 120-year lifespan.

"This suggests there is another benefit to no-till beyond soil conservation and improving water quality," Vyn said. "There is an air quality benefit as well."

Vyn said finding ways to reduce nitrous oxide emissions is important because food production accounts for about 58 percent of all emissions of the gas in the United States. Of that, about 38 percent is coming from the soil.

The study took place on a consistently managed 30-year-old rotation/tillage experiment near Purdue.

The next step in Vyn's research is to develop integrated management practices to reduce nitrous oxide emissions even more. He's also studying additives that slow the conversion of nitrogen-based fertilizers to chemicals that can emit nitrous oxide.

A U.S. Department of Agriculture grant to the Consortium for Agricultural Soil Mitigation of Greenhouse Gases at Kansas State University funded the research. The Indiana Corn Marketing Council and Dow AgroSciences are funding his present on-farm studies of integrated management practices to reduce nitrous oxide emissions. 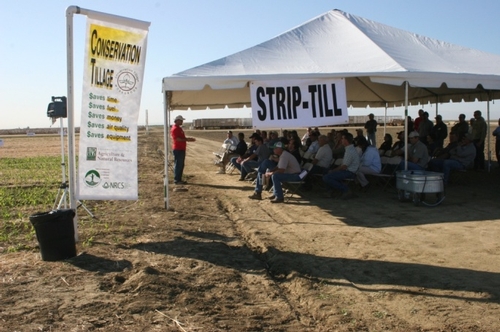 Information is available for dairy operators interested in conservation tillage.
Tags: dairy (3), silage (1)
Comments: 0
CT and Cropping Systems Workgroup to be at M-52 at this year’s World Ag Expo
Published on: January 18, 2011

California’s Conservation Tillage and Cropping Systems Workgroup will once again maintain a site at the 2011 World Ag Expo coming up February 8-10 in Tulare. The workgroup booth will be at site M-52, which is about 30 yards due south of the main North Gate 6 entrance.

This year, we will be providing a series of live presentations on various aspects of conservation agriculture through much of each day in addition to our other information offerings.

The presentations will start at 10 a.m. each day and cycle through the day at the M-52 Workgroup tent.

California’s Conservation Tillage and Cropping Systems Workgroup will present educational tours and programs at three locations in California March 9-11 to convey information on innovative conservation tillage crop production systems that are being developed in irrigated regions of South Dakota, Nebraska, Colorado and Washington.

In addition to sharing information about the conservation cropping systems in these states, the speakers will discuss how the principles and practices can be implemented on California farms.

The first conference will be held March 9 at the UC Davis Western Center for Agricultural Equipment. The second meeting convenes on March 10 at the SCE Ag-TAC facility in Tulare and continues in the afternoon with tours of three Central Valley farms. The final session is March 11 at the UC West Side Research and Extension Center in Five Points. The presentations at the three locations will be the same. There is no registration fee and no pre-registration necessary.

The three featured speakers, all national leaders in the practice of conservation tillage, are:

“The main reason we invited these out-of-state experts is to learn how the conservation tillage systems they have developed relate to California,” said Jeff Mitchell, UC Davis Cooperative Extension cropping systems specialist and coordinator of the conference. “All of them come from areas where farmers practice irrigated agriculture. We are planning to very thoroughly and thoughtfully consider with them, through a series of dialogues and discussion, the relevance and application of their work on farms in California.”

For additional information on these conferences see the Conservation Tillage and Cropping Systems Workgroup website or contact Mitchell at mitchell@uckac.edu, (559) 646-6565.

National No-till Farmer magazine has published an article by a member of the UC Conservation Tillage and Cropping Systems Workgroup, Michael Crowell.

The Crowell family has been in the dairy business in Turlock for more than 100 years. Currently, Crowell's son Adam manages Bar-Vee Dairy and milks about 700 cows. The family raises their own heifers, so in all the herd is about 1,400 head.

One way the Crowells have dealt with dairy industry volatility is growing as much of their own forage as possible. In his article, Crowell said no-till farming has allowed the family to produce three high-quality forage crops per year.

"Once I started no-tilling I’ve never missed a single National No-Tillage Conference, I read magazines and get hands-on advice from my University of California-Davis extension contact, Jeff Mitchell," Crowell wrote.