Whether it’s called “high residue farming” or “conservation agriculture,”  there’s very little of it currently done in California. For decades, the dominant production paradigm throughout California has been just the opposite - intense tillage, clean cultivation and residue-free fields.

There is, however, growing interest in these sorts of crop production alternatives as evidenced by the lively and engaging discussions that took place as part of the recent three-day conference series, "New horizons for conservation cropping in California," March 9, 10 and 11 in Davis, Tulare and Five Points, respectively. The events brought three leaders in the development of high residue conservation tillage systems under irrigated conditions to California’s Central Valley to share their experiences and to propose possible applications of these cropping approaches for California farmers.

Mike Petersen, precision tillage agronomist with Orthman Mfg. and former USDA Natural Resources Conservation Service Area soil conservationist for the 18 northeastern counties of Colorado, presented an extensive research base that he has helped develop demonstrating advantages of precise fertilizer placement at two depths below the seed, leading not only to increased early season root growth, but also grain yield for strip-till corn versus conventionally tilled corn.

By only tilling in the areas of the field where seed is sown, typically about 30 percent or less of the total soil area, less than about two gallons of diesel fuel are used, little or no soil erosion occurs, and yield increases averaging 11 to 30 bushels per acre have been seed over an eight-year field comparison.  Precision tillage and fertilizer placement that are readily afforded by strip-tillage planting systems would thus have considerable and multiple advantages that may have clear relevance for California producers.

Since 2004, Andy McGuire, educator with Washington State University based in Moses Lake, Wash., has been working with Central Washington farmers to develop successful high residue systems for a variety of the region’s diverse irrigated crops.  He has found that there tends to be typically no single factor motivating farmers to adopt high residue production techniques, but rather a suite of reasons that often combine to influence crop management decisions.

Compared to conventional systems, high residue farming systems involve less overall tillage, diesel fuel use and labor, opportunities for double-cropping, and more free time, as well as reduced soil water evaporation.  Essentially, all of the quite diverse crop production in this region of Washington relies on overhead center pivot irrigation, which McGuire pointed out is particularly well suited for high residue farming because furrows and beds do not need to be prepared to move water across a field as is done with surface irrigation.

High residue cropping opportunities that Washington farmers are now using that may have relevance for California include edible dry beans strip-till planted into alfalfa, strip-till seeded onions into burned down wheat cover crop residue for wind protection, and even potato production systems that reduce wind erosion by preserving surface residues of prior crops.

The progress and accomplishments of Dwayne Beck, the final presenter at the “New Horizons for Conservation Cropping in California” conferences, and the farmers in central South Dakota he has been working with since the 1980s are in many fundamental ways nothing short of phenomenal and transformative, and provided considerable “food for thought” for the California farmers, researchers, and consultants who participated in each of the three conference sessions.

Beck is the South Dakota State University manager of the Dakota Lakes Research Farm, a farmer-owned research facility just outside the state’s capital of Pierre that has been no-till farmed since 1990. The no-till, high residue systems developed by Beck and his farmer colleagues have resulted in reduced soil water evaporation, far greater cropping diversification and intensification, considerably lower pesticide inputs, and increased net farm income throughout the region by over a billion dollars since the early 1990s.

Tillage, Beck pointed out, reduces the ability to manage the overall crop production system and should be replaced by other cultural practices including surface residue conservation, rotation, sanitation and competition. The benefits of no-till high residue systems will eventually have relevance for California as well, Beck suggested, and farmers here should also be able to “take the E out of ET” as their counterparts in South Dakota have done, once they “take the T out of ‘can’t.’” 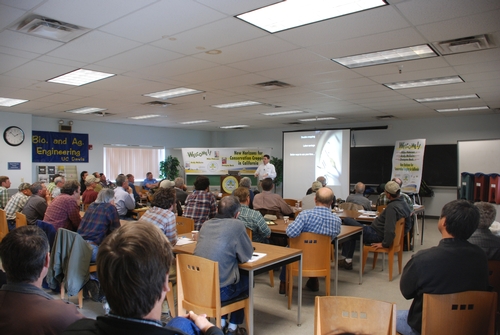